THIS WEEK
The third-ranked University of Iowa field hockey team will host the Big Ten/ACC Challenge this weekend at Grant Field. The Hawkeyes will face No. 11 Wake Forest in the regular season opener Friday at 3:30 p.m. (CT) before squaring off against top-ranked North Carolina on Sunday at 11 a.m.

Michigan will also host both teams, facing the Tar Heels at 1 p.m. on Friday and the Demon Deacons at 1 p.m. Sunday. Admission to all games is free of charge.

FOLLOW LIVE
• Iowa field hockey fans can follow all contest via live stats on hawkeyesports.com. Click on the “Live Stats” link found on the field hockey schedule page to access the feed. Fans can also follow @IowaFieldHockey on Twitter for live in-game updates.
• Both Friday and Sunday’s games will be streamed live on BTN+ — a paid subscription service.

WHAT YOU NEED TO KNOW
• Head coach Lisa Cellucci — the 2020 Big Ten Co-Coach of the Year — is in her eighth season at the helm of the Hawkeye field hockey program and her 22nd season overall. In 2020, Cellucci led the program to the Final Four for the 12th time — the first since 2008 — in its history.
• The Hawkeyes are ranked third in the Penn Monto/NFHCA Preseason Poll. Iowa finished the 2020 season ranked fourth.
• Iowa finished the season 12-6 overall and 5-3 in Big Ten play.
• The Hawkeyes return all 11 starters and a total of 21 letterwinners, including every player from last season’s Final Four team.
• Iowa returns three All-Americans — Anthe Nijziel, Maddy Murphy and Ellie Holley — and a total of five players that earned NFHCA All-Region distinction.
• Nijziel is the reigning Big Ten Player of the Year and Defensive Player of the Year.

ALL EYES ON GRANT
When the Hawkeyes open the 2021 season on Aug. 27 for the B1G/ACC Challenge, three of the four Final Four participants from the 2020 season will be in attendance. The Hawkeyes will host North Carolina and Wake Forest, while Michigan will also be in the four-team field.

B1G PLAYERS TO WATCH
Seniors Maddy Murphy, Anthe Nijziel and Lokke Stribos were named Big Ten Players to Watch for the 2021 season. The trio has combined to start 200 games over their Hawkeye careers.

EXPERIENCE GALORE
The Hawkeyes boast an experienced team with 14 upperclassmen, including four fifth-year seniors, seven seniors and three juniors. Over the past four years, Iowa’s fifth-year seniors have won 50 games.
• Seniors Anthe Nijziel and Lokke Stribos have started all 61 games of their Hawkeye careers. Fifth-year Maddy Murphy has started 78 career games, missing only one possible game (in 2020) in her Hawkeye career.
• Seniors Ellie Holley (62 starts) and Nikki Freeman (67 starts) have eached started more than 60 games in their Hawkeye careers.

SPREADING THE WEALTH
Ten different players scored at least one goal in 2020 and eight players scored two or more goals. The Hawkeyes finished with a 209-89 advantage in shots (117-50 in SOG) in 2020.

THE “D” IN DEFENSE
Iowa finished with 12 wins in 2020 with eight coming in shutout fashion. The Hawkeyes allowed just 89 shots with 50 being on goal and goalkeeper Grace McGuire posted 35 saves and allowed just 14 goals.
• McGuire logged every minute in goal during the 2020 season, where she posted a 1.16 goals against average with 35 saves and a .714 saves percentage.
• Iowa’s defense did not surrender a goal in the first period in 2020. 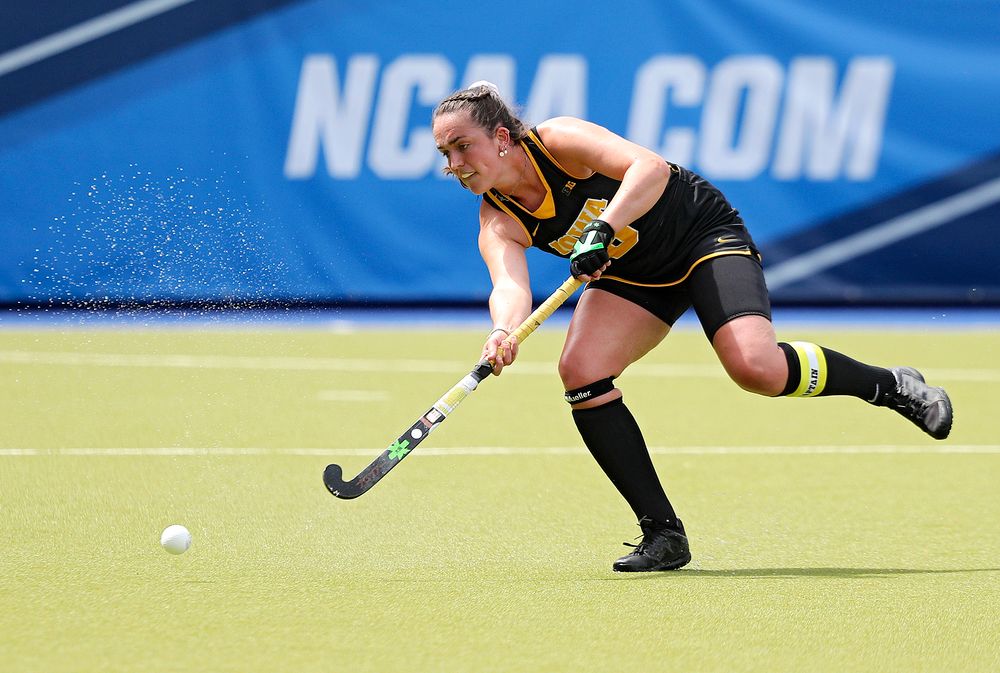 MMM-URPHY
Senior Maddy Murphy earned her third All-America distinction in 2021, making her the eighth Hawkeye all-time to earn three or more All-America honors. The forward led the team with 18 points a season ago off eight goals and two assists.
• Murphy has scored double digit goals in three of her first four seasons, including a career-high 13 goals in 2018. The Tasmania native has 12 career game-winning goals.

SCOUTING NORTH CAROLINA
• The Tar Heels finished the spring 2021 season with a 19-1 overall and 9-1 conference mark. UNC won the National Championship with its only loss to Louisville.
• North Carolina is led by senior forward Erin Matson. Matson led the Tar Heels in goals (29), points (67) and shots (124) last season.
• Matson and fellow teammate and senior midfielder Meredith Shoulder were named to the 2021 Preseason All-ACC team.
• Head coach Karen Shelton, all-time winningest coach in the NCAA, is entering her 40th season with the Tar Heels. In her tenure at UNC, Shelton has led the program to eight NCAA Championships, 23 ACC Championships and 38 winning seasons.

SCOUTING WAKE FOREST
• The Demon Deacons went 6-11 overall and 3-2 in ACC last season with wins over Virginia, Duke and Boston College.
• Wake Forest was led by junior midfielder Nat Friedman and sophomore forward Grace Delmotte as the pair both finished with five goals and 11 points each.
• Junior midfielder Meike Lanckohr was named to the Preseason All-ACC Team.
• Head coach Jennifer Averill is entering her 30th season at Wake Forest where she has earned seven ACC Coach of the Year honors. In 2018, she led the Demon Deacons to the Final Four for the first time since 2008.

SERIES RECORDS
• Iowa is 8-13 all-time against Wake Forest. The Hawkeyes won the previous meeting in 2019, downing the Demon Deacons, 2-1, in Ann Arbor. Iowa has won eight of the last nine meetings in the series.
• The Hawkeyes are 3-31 all-time against North Carolina. The two teams last met last season in the Final Four — a 3-0 Tar Heel victory on their home turf. During the last regular season match-up, Iowa dropped a 2-1 decision to UNC in Ann Arbor.
• The Hawkeyes’ last victory over North Carolina came in 2008 — a 3-2 win in Winston-Salem, North Carolina.

UP NEXT
The Hawkeyes hit the road for Week 2, traveling to Boston for a pair of contests, beginning with a Sept. 4 matchup against New Hampshire.