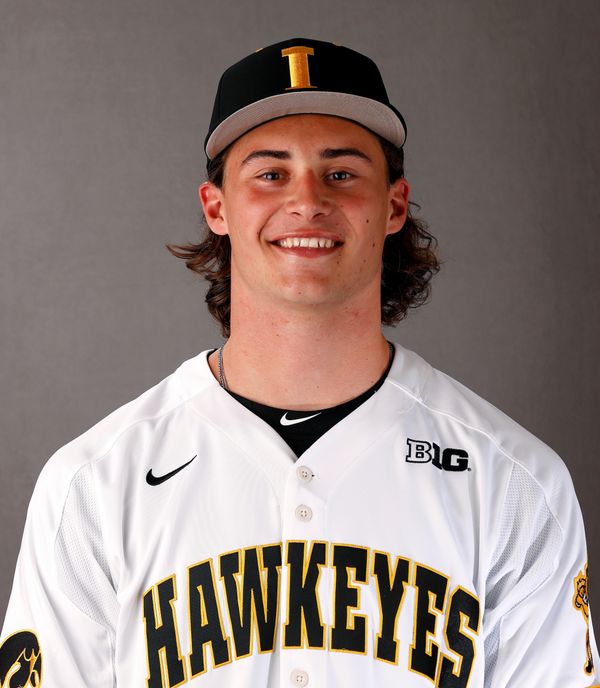 Hawk Item — Dual-sport athlete… scholarship wide receiver on the Iowa football team… was rated as the No. 77 prospect available for the 2021 MLB Draft.

2022 Honors — Collegiate Baseball Freshman All-American… Perfect Game Second-Team Freshman All-American… Big Ten All-Freshman team selection. 2022 — Went 1-3 with a 3.18 ERA in 17 appearances, including one start… had 44 strikeouts to 25 walks over 22 2/3 innings… allowed one earned run in his last 10 relief outings, spanning 13 1/3 innings with 28 strikeouts… made his first career start against Michigan (5/29) in the Big Ten Tournament semifinals… tossed two shutout innings in the win over Bradley (4/19)… struck out three in 1 1/3 innings of relief at Milwaukee (4/12)… struck out all six batters in two innings at Bradley (4/6)… had four strikeouts over two innings against Central Michigan (3/26)… pitched a 1-2-3 seventh against Cornell College, hitting 101, 101 and 100 on his first three “official” pitches at Duane Banks Field in a combined shutout… notched his first career victory, tossing four innings of scoreless, hitless relief against Ball State (2/19)… fanned seven batters… rated as the top incoming recruit in the Big Ten and the No. 9 recruit nationally by Perfect Game… ranked as the No. 1 prospect in the Big Ten for the 2024 MLB Draft by Perfect Game… ranked as the No. 4 impact freshman in the Big Ten by D1Baseball.com.

High School — Iowa Gatorade Player of the Year… rated as the No. 3 player in the state of Iowa… first-team Elite All-State selection as a senior… three-time all-state honoree, earning first-team honors as a junior and senior and third-team as sophomore… Des Moines Register all-Iowa Elite Team and first-team Class 4A selection as a senior… four-time all-conference honoree, including three first-team honors… three-time first-team all-district… went 10-0 with a 0.57 ERA as a senior with 126 strikeouts… limited hitters to a .099 batting average and had a .77 WHIP… tossed a no-hitter as a senior and had a school-record 17 strikeouts against Ames… went 3-0 with a 2.45 ERA as a junior with 69 strikeouts, a .143 batting average against and a 1.25 WHIP… was 6-3 with a 2.46 ERA as a sophomore with 70 strikeouts, a .182 batting average against and a 1.66 WHIP… hit .316 as a freshman with 21 RBIs and three home runs… holds school records for single-season ERA (0.57) and winning percentage (1.000)… led team to a conference title and a third-place finish at state as a senior… also a Des Moines Register Elite All-State selection as a junior and senior where he also earned first-team all-district and all-state honors as a wide receiver… led team to a state title as a senior with an 11-1 record… holds school records for career receptions (124), receiving yards (2,269 and touchdown receptions (29)… earned Academic Achievement Award in three sports and CIML All-Academic recognition… member of the DMACC Dean’s List in 2021… Fellowship of Christian Athletes… high school coach was Joe Balvanz.