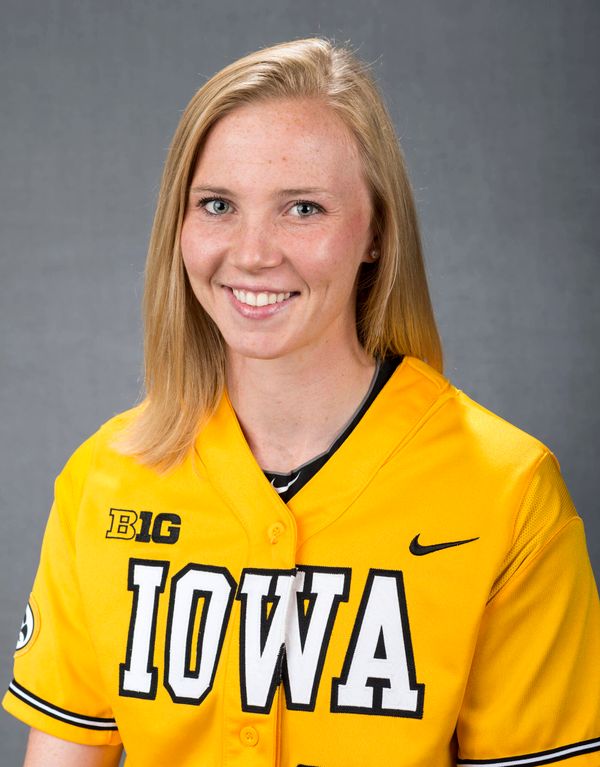 Hawk Items… Started all 47 games of her sophomore season in the outfield… hit her first career walkoff with a two-run home run on Senior Day (May 4, 2014) against Ohio State.

2016 as a Senior… Played in 48 games with 27 starts… had 26 starts in the outfield and one at first base… had 12 hits, eight walks and four RBI in 73 at-bats… was 1-1 on stolen bases… defensively, collected 62 putouts and 10 assists… chipped in 23 putouts and five assists in league play… recorded a single against Sam Houston State on Feb. 13… singled and scored on a sacrifice squeeze against Texas A&M-Corpus Christi on Feb. 14… recorded a single and an RBI and notched first career stolen base in Iowa’s 7-1 win over IUPUI on Feb. 19… reached base twice on a walk and a single to left against Lipscomb on Feb. 20… recorded a bases loaded RBI walk and scored a run against Georgia Southern on Feb. 26… went 1-for-2 with a single against Tulsa on March 6… entered Iowa’s March 6 game against Lamar for defense and singled in only at-bat of the game, also scored a run in Iowa’s 14-8 come-from-behind victory over the Cardinals… singled and registered an RBI against Hawaii on March 18… hit first home run of the season against Purdue on April 3… singled against Nebraska on April 6… walked and singled against Northwestern on April 9… reached on an error and scored the game-winning run in Iowa’s walk-off victory over Drake on April 13… registered a double against Penn State on April 22…walked and reached on a fielder’s choice against the Nittany Lions on April 24.

2015 as a Junior… Appeared in 57 games with 53 starts… notched starts in three different positions in 2015, including 23 in left field, 19 at first base, and 11 in right field… scored a career-high two runs against Northern Iowa… recorded a pinch high double vs. Missouri State and came around to score a run on Feb. 21 … hit her fifth career home run against Missouri State on Feb. 22… Ragin’ Cajun All-Tournament Team Selection… went 2-for-2 with a career high four RBIs in Iowa’s 10-2 win over LIU Brooklyn… matched her career high with two runs scored against LIU Brooklyn… plated a run on a bunt squeeze in Iowa’s 3-2 win over No. 17 UCF… executed her second squeeze bunt of the season in Iowa’s 12-11 win over Cal State Fullerton… went 1-for-2 with 2 walks and a career-high two runs scored against Maryland on March 20… hit a double and scored a run in Iowa’s 16-7 loss to Nebraska on March 25… went 1-for-3 in game one and two of the Michigan series, with a double and a run scored in game two… registered a hit in Iowa’s 15-7 run-rule victory over Illinois on April 3… Tied her career high with two runs scored in back-to-back games against Illinois on April 3 and 4… went 1-for-3 with a double and scored a run in Iowa’s 16-4 run-rule victory over Wisconsin on April 10… notched a double in Iowa’s 3-2 victory (10 innings) at Wisconsin on April 12… went 1-for-2 with a single and a walk against Purdue on April 18… recorded a hit against Minnesota on April 26… went 2-for-4 with two RBIs and a run scored against Northwestern on May 2… recorded her second home run of the season and sixth of her career… went 1-for-3 with a single in Iowa’s Big Ten Tournament opening round game against Rutgers on May 7… plated her 15th run of the season in Iowa’s Big Ten Tournament semifinal game against Nebraska on May 9… letterwinner.

2014 as a Sophomore… Started all 47 games of the season in the outfield… opened the season with a seven-game hitting streak… hit the first two home runs of her Hawkeye in the stretch and posted two multiple hit games… hit her first career walkoff when she knocked a two-run home run out of Pearl Field against Ohio State on Senior Day (May 4)… hit a career-high two doubles on Feb. 28 against Valparaiso… recorded three outfield assists… compiled the second-longest hitting streak (7) and the third-longest reached base streak (9) on the squad… ended the year with a four-game hitting and reached base streak… recorded seven multiple hit games (seven 2-hit contests) and three multiple RBI games (three 2-RBI contests)… letterwinner.

2013 as a Freshman… Played in 28 games with 20 starts — 12 in right field, seven at first base, and one at designated player… started the last seven games of the season… recorded first multi-hit game (2-for-3) in win at Purdue on May 4, and posted Big Ten individual season-high 19 putouts… started all three games at first base during sweep at Purdue (May 3-5), registering three hits in eight at-bats… started first career game on Feb. 15 vs. Dayton in the Lovelace Invitational… notched first career RBI on Feb. 9 in victory over No. 11 Louisiana-Lafayette… registered first career hit on March 10 vs. Radford in Miken Invitational… letterwinner.

High School… Two-time first team all-conference selection… batted .468 with 34 RBIs and 16 runs as a junior, .337 with 34 runs and 15 RBIs as a sophomore and .464 as a freshman… led team to the North Coast Section Division III title as a freshman and sophomore for the first time in school history… played for the Nor Cal Cobras 12U team, the Nor Cal Shockers 14U squad and the 18 Gold Nor Cal Shockers… attended the Derek Allister National Elite Camp in Southern California following junior season… named to the honor roll.