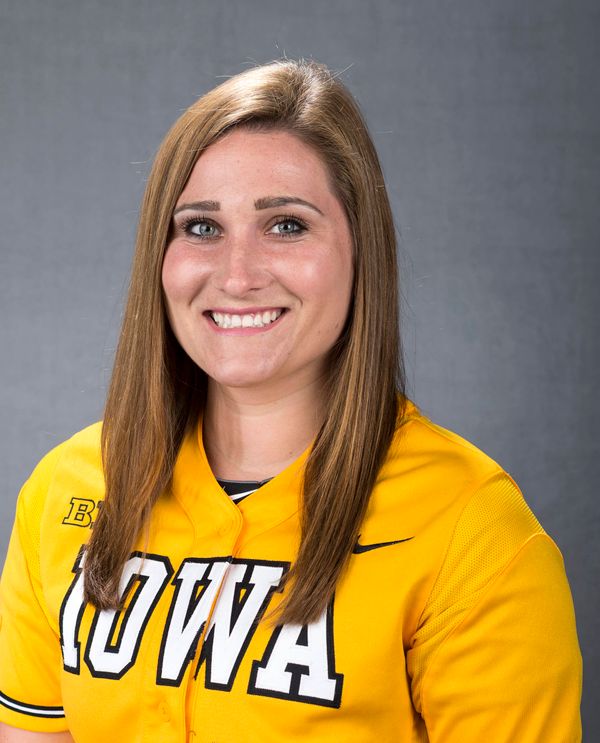 Hawk Item… One of three athletes to start all 47 games of the 2014 season (Megan Blank and Erin Erickson)… joined the team in Jan. 2012 after graduating from high school a semester early.

2015 as a Redshirt Junior… Played in 50 games for the Hawkeyes with 46 starts… has made 43 starts as Iowa’s catcher and three as the designated player… called Iowa’s 2-0 no-hit win over Southern Utah… recorded two RBIs on two hits in Iowa’s win over Northern Iowa… recorded a double in Iowa’s 3-2 win over No. 17 UCF… went 2-for-2 with a double and an RBI in Iowa’s 12-11 win over Cal State Fullerton… recorded her fourth multiple hit game with a 2-for-3 performance at Oklahoma on March 15 with one RBI on a solo home run… it marked her first home run of the season and the fourth of her career… went 1-for-5 against Maryland on March 20 with a double to match her career-high… was 3-for-4, matching her career-high in hits, against Maryland on March 21 with two RBIs… hit her second double in as many games in the contest… hit .375 (3-for-8) in the three game series at Michigan with four runs driven in… went 1-for-3 in game one, 1-for-3 in game two with two RBIs, and 1-for-2 with two RBIs, a run scored, and her fifth career homerun… hit her second home run in the last three games with a 2-RBI long ball against Western Illinois on April 2… walked twice and scored a run in Iowa’s 15-7 run-rule victory over Illinois on April 3… went 1-for 3 with a walk and 2 RBIs against Illinois on April 4… hit 2-for-4 and registered a walk against Illinois on April 5… recorded two hits in each game of a three-game set against Wisconsin on April 10-12… went 2-for-4 and plated three runs in Iowa’s 16-4 win over Wisconsin on April 10… went 2-for-4 with a double and two RBIs in a loss to Wisconsin on April 11… registered two hits and a walk in Iowa’s 3-2 10-inning victory over Wisconsin on April 12… drew a walk and plated a run in Iowa’s 5-1 victory over Purdue on April 18… went 1-for-2 with a walk against Northwestern on May 1… registered an RBI single in Iowa 5-3 win over Rutgers in the opening round of the Big Ten Tournament… recorded the game-winning 2 RBI double against No. 12 Minnesota in the Big Ten Tournament quarterfinals on May 8… went 2-for-4 with an RBI and a run scored in Iowa’s Big Ten Tournament semifinal game against Nebraska on May 9… hit .400 in three games at the Big Ten Tournament and registered a team-leading 4 RBIs… letterwinner.

2014 as a Redshirt Sophomore… Started all 47 games of the season as the catcher… caught a season-high 13 runners stealing, which was fourth in the Big Ten… matched her career-high with three hits against Ohio State on May 2… posted back-to-back multiple hit games against Northern Iowa on April 30 (2-for-4) and Ohio State on May 2 (3-for-4)… compiled a five-game hitting streak and a six-game reached base streak… posted seven multiple hit games (five 2-hit games and two 3-hit games)… letterwinner.

2013 as a Redshirt Freshman… Started 53-of-54 games — all coming at catcher… one of six Hawkeyes to play in all 54 games… hit .217 with three home runs and 26 RBIs — the fourth-most of any Hawkeye… posted six multi-hit games (five two-hit outings, one three-hit performance)… tied for second on the team with eight multiple-RBI games (five-2 RBI games, two-3 RBI contests, one-4 RBI game)… ranked seventh in the Big Ten in hit-by-pitches (11 total)… third in the Big Ten in runners caught stealing (12) and fourth in runners picked off (two)… led the league, in conference games only, in runners caught stealing (eight)… hit in five different spots in the batting order (4th, 5th, 6th, 7th, 8th) — hit fourth the most of any Hawkeye (19 times)… posted first career hit on the opening day of the season vs. Texas State — a two-run homer… hit a walk-off grand slam in run-rule victory over Ohio State on March 10… posted two sacrifice flies in victory at Cal State Fullerton (March 2), marking a Big Ten individual season-high… letterwinner.

2012 as a Freshman… Redshirted… did not see any game action.

High School… Three-time Indiana all-state, all-conference and all-district selection… batted .470 with 38 RBI, six home runs and 13 doubles as a junior… hit .475 with 31 RBI and 12 doubles as a sophomore and .414 with 30 RBI and 25 runs as a freshman… holds the Penn High School records for home runs, doubles and RBI… led team to three conference titles in her career… team claimed the sectional and regional championship during her junior season before falling in semi-state…. played ASA ball for the Indiana Magic Gold 16U-18U teams… High Honor Roll member.