Softball
University of Iowa Athletics
1B 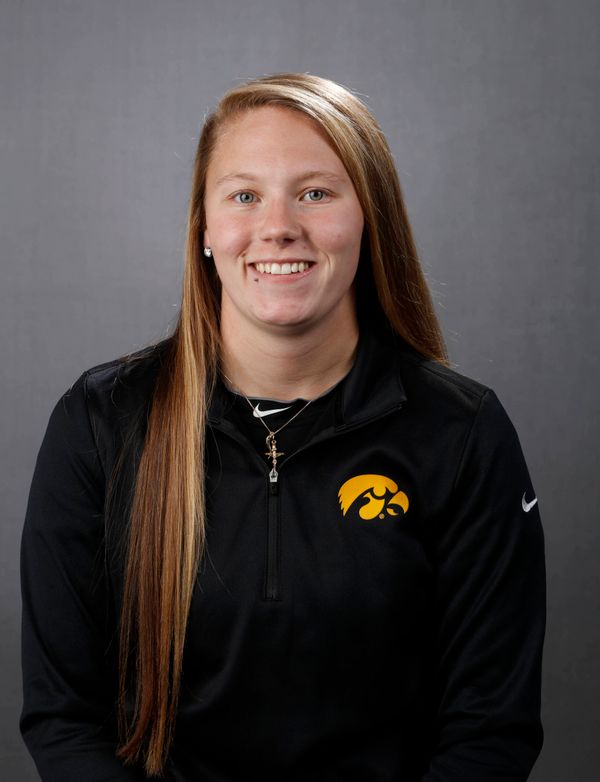 2017 as a senior… Played and started all 51 games… played primarily first base… tied for a team-high 36 hits and 20 runs… led the team with 11 doubles and had a home run for a .350 slugging percentage… tied a team-high 16 RBIs… registered a .382 on-base percentage… recorded a team-high 10 stolen bases… had four sacrifice bunts… was 2-for-3 with a run against Northwestern on May 5… scored a run in win over Western Illinois on April 25… went 1-for-2 at No. 5 Minnesota on April 21… scored a run in win over Iowa State on April 18… was a perfect 3-for-3 with a double and a run scored in win over Rutgers on April 14… notched a hit and two RBIs in win over Nebraska (G2) on April 12… was 2-for-4 with two doubles, a run, and an RBI in win over Nebraska (G1) on April 12… smacked a walk-off double RBI in game one over Nebraska… was 3-for-5 with a double and an RBI at Wisconsin on April 9… scored a run and had two RBIs with one sacrifice hit at Purdue on April 2… scored a run at Purdue on March 31… scored a run in game two against Illinois on March 26… recorded a double and an RBI in game one against Illinois on March 26… went 1-for-2 with a double, a run scored, and an RBI against South Dakota State on March 19… was 1-for-2 with two RBIs against Creighton on March 19… went 2-for-3 against Drake on March 12… racked up one run against No. 20 Arizona State on March 4… went 1-for-2 against No. 7 Washington on March 3… was 2-for-4 with two runs against Fresno State on March 2… went 1-for-3 with one double and one RBI at Georgia Tech on Feb. 18… was a perfect 3-for-3 with a home run against Virginia Tech on Feb. 18… had a stolen base against Virginia Tech on Feb. 18… went 2-for-4 with one run and two RBI against Texas Tech on Feb. 11… was 2-for-2 with one RBI against Texas A&M Corpus Christi on Feb. 11… tied a career-high three runs against the Islanders… recorded a double against Abilene Christian on Feb. 10.

2016 as a junior… Played and started all 51 games at first base… racked up 44 hits and a team-high 38 runs in 154 at-bats… tied a team-high 11 doubles and collected a team-high nine home runs for team-best .571 slugging percentage… the nine home runs tied for eighth in single-season home runs in program history… led the team with a .418 on-base percentage… had a team-high 13 stolen bases on 15 attempts… defensively, led the team with 321 putouts and 25 assists… registered 20 hits and 14 runs in league play… had three doubles and four home runs for a .486 slugging percentage in Big Ten action… was a perfect 5-5 in stolen bases during conference play… tallied 146 putouts and 10 assists during league play… was hit by a pitch, stole a base, and then scored on a wild pitch against Louisville on Feb. 13… went 2-for-3 with a double, triple, and a walk against Sam Houston State on Feb. 13… scored a career-high three runs… walked and executed the sacrifice squeeze against TAMUCC on Feb. 14… went 2-for-3 with single, walk, and a home run in Iowa’s 7-1 win over IUPUI on Feb. 19… singled up the middle against Lipscomb on Feb. 20… reached base three times — an infield single, walk, and a hit by pitch — against Loyola-Chicago on Feb. 20… hit second home run of the season with a two-run blast against Indiana State on Feb. 21… hit 438 in five games at the Coastal Carolina Invitational from Feb. 26-28… registered a single, home run, three RBIs, and a stolen base in Iowa’s 11-0 win over Georgia Southern on Feb. 26… singled, doubled, and scored a run in game two against Georgia Southern on Feb. 26… walked twice and scored two runs against Coastal Carolina on Feb. 27… singled against Georgia Southern on Feb. 27… went 2-for-3 with two doubles, two RBIs, and two runs scored against Coastal Carolina on Feb. 28… reached base twice on a walk and a hit by pitch, stole a base, and scored a run in Iowa’s 4-3 win over Lamar on March 5… singled, scored a run and stole a base against Tulsa on March 6… went 3-for-5 with two doubles and a home run, and tied career high with four RBIS against Lamar on March 6…. walked, got hit by a pitch, and scored the game-winning run against Texas on March 16… registered an RBI single and stole a base against Hawaii on March 16… recorded a two-run triple against Texas on March 17… went 2-for-3 with a triple, RBI double, a walk, stolen base, and a run scored in Iowa’s 4-0 win over Hawaii on March 19… walked and scored a run in game one against Indiana on March 25… went 1-for-2 with a three run home run and a pair of walks at Indiana on March 27… went 2-for-3 with a pair of singles, an RBI, run scored, and a walk against Purdue on April 1… singled and scored a run against Nebraska on April 6… put down a sacrifice bunt in the second game of a doubleheader against the Huskers on April 6… registered a two-run home run, a single, and reached on a hit by pitch against Northwestern on April 9… was a triple shy of the cycle against Northwestern on April 10 and matched career-high with three hits… registered an RBI double in Iowa’s 6-3 win over UNI on April 12… hit the game-tying home run with two outs in the bottom of the seventh inning against Drake to send the game into extra innings… hit the walk-off 4-3 groundout in the bottom of the eight to give the Hawkeyes the 8-7 victory… plated three of Iowa’s eight runs in the last two innings… singled, stole a base, and scored a run against Wisconsin on April 15… walked twice and scored a run against Missouri on April 19… registered at least one hit in all three games against Penn State from April 22-24, including a 2-for-4 performance on April 22… hit .429 in three games against Illinois from April 29-May 1… registered a pair of singles, a double, and a walk in that span.

2015 as a sophomore… Appeared in 41 games with 37 starts at first base… recorded a pinch hit single against Hofstra… worked her way back into the starting line-up at first base against Missouri State… hit .500 and recorded a slugging percentage of 1.167 in Ragin’ Cajun Invitational action to lead the Hawkeyes… hit her first home run of the season vs. Missouri State; the second of her career… went 2-for-2 with 2 RBIs in Iowa’s 10-2 loss to Princeton… went 2-for-3 with a double in Iowa’s 2-1 loss to Oregon… was 1-for-3 at the plate with a run scored and an RBI in game two of the Michigan series… doubled in the game-winning runs with a 2-RBI double in game three of the Michigan series… went 1-for-2 at Drake on April 1 with a hit by pitch… hit her third career home run against Western Illinois on April 2… went 2-for-2 with a walk and an RBI in Iowa’s 15-7 run-rule victory over Illinois… recorded a 2-for-3 performance at the plate against Illinois on April 5… tied her career high with two runs scored against Wisconsin on April 10… went 1-for-2 with a walk and an RBI… hit her fourth career home run against Wisconsin on April 11… went 1-for-3 with her first career triple and a walk against Iowa State on April 15… recorded her fifth career home run against Purdue on April 18… went 1-for-3 at the plate and scored two runs… reached base twice (HBP) against Minnesota on April 2… recorded a double against Northwestern on May 1… walked twice in back-to-back games against Northwestern on May 2-3… recorded a game-tying, two-run home run to help the Hawkeyes to an eventual 5-3 victory over Rutgers in the opening round of the Big Ten Tournament on May 7… went 1-for-3 at the plate with a single, walk, and a run scored in Iowa’s Big Ten Tournament semifinal game against the Huskers on May 9… letterwinner.

2014 as a freshman… Appeared in 33 games with 27 starts in the outfield or at first base… was a perfect 3-for-3, hit her first career home run, scored a career-high two runs and tallied a career-most four RBIs against Missouri on April 16… doubled in consecutive games against Drake on April 2 and Northwestern on April 5… singled up the middle in her first career at bat at Mississippi State on Feb. 22… also appeared as a pinch runner six times… letterwinner.

Personal… Born on June 27, 1994… daughter of Dennis Mullarkey and Rachale Paterno-LaCoppola and Joe LaCoppola… has one brother, Anthony, and one sister, Nicole… sports management major.