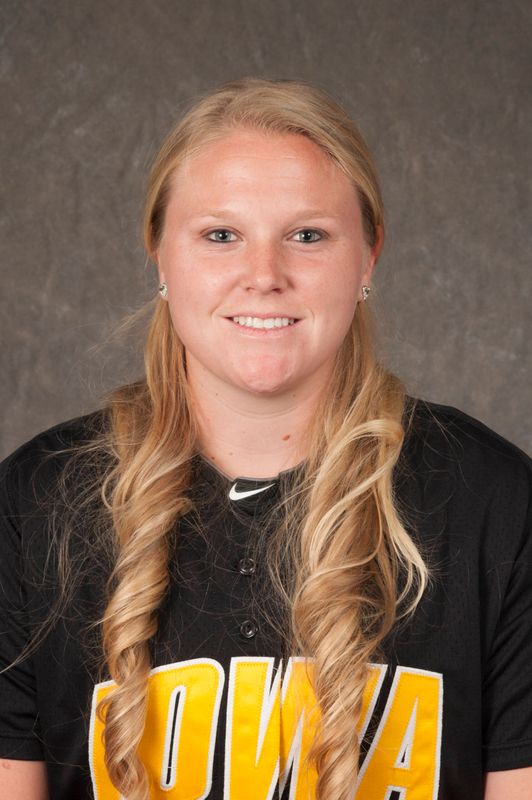 2014 as a Senior… Appeared in 42 games with 40 starts as a pitcher, designated player or first baseman… led the pitchers in ERA (2.86), record (10-17-1), appearances (31), games started (28), complete games (24), shutouts (3), innings pitched (191.0), strikeouts (121) and opponent batting average (.263)… her 121 strikeouts is a season-high, as she struck out 120 in her sophomore season… recorded shutout wins over Drake on Feb. 16, Valparaiso on Feb. 28 and Indiana on April 25… garnered Big Ten Pitcher of the Week honors on March 31 after posting two complete game wins over Wisconsin… set a season-high and matched her career-high with nine strikeouts at Indiana on April 25… led Iowa with six home runs and was second on the team with 17 RBIs, eight doubles, 57 total bases and a .483 slugging percentage… hit home runs in consecutive games at Illinois on March 21 and March 22… ended the season with a five-game hitting streak and a nine-game reached base streak… had eight multiple hit games (seven 2-hitters and one 3-hit contest) and three multiple RBI games (two with 2-RBIs and one with 3-RBIs)… ends her career ranked fourth in complete games (89), sixth innings pitched (745.1), eighth in games pitched (133), ninth in wins (54) and strikeouts (457) and 15th in home runs (15) in the Iowa record books… ended the season ranked sixth in the Big Ten in innings pitched (191.0), seventh in batters struck out looking (41) and games started (28), ninth in ERA (2.86) and 10th in batters struck out (121)… letterwinner.

2013 as a Junior… Big Ten All-Defensive Team Pitcher… named to Big Ten Preseason All-Conference First Team (College Sports Madness)… posted 17 wins in the circle with a 1.000 fielding percentage and hit .320 with nine homers and 40 RBIs… inside the circle, went 17-13 overall with a 3.09 ERA, registering 25 complete games in 31 starts — 17 wins are a career best… won four games inside the circle against ranked foes (No. 15 Stanford, No. 11 Louisville, No. 21 Kentucky, No. 19 Nebraska)… posted four shutouts (at Cal State Fullerton, vs. Ohio State, at Drake, at Purdue)… finished seventh in the league with 199.1 innings pitched and eighth with 17 wins… started the sixth-most game of any league pitcher (31)… in lineup in almost every game, after only 57 at-bats during first two seasons… hit safely in 39-of-52 games in which she batted and reached base in 42… recorded 14 multi-hit games and eight multiple-RBI games, ranking third and second on the team, respectively… second on the team with nine home runs… posted team’s longest hitting streak of the season (12 games) and second longest reached base streak (18 games)… named to the 2013 Lovelace Invitational All-Tournament Team as Tournament MVP… finished the weekend with a 0.39 ERA in three appearances (two starts)… she allowed only eight hits in 18 innings pitched and allowed one earned run, while recording 14 strikeouts… at the plate, registered the highest batting average of the tournament — she hit .500, notching six hits in 12 at-bats… she posted two RBIs, a run scored and her first career home run… selected to Bama Bash All-Tournament Team, hitting .462 with a home run and five RBIs… she posted a .692 slugging percentage and scored one run… inside the circle, recorded two complete games against top-ranked Alabama… blanked the Purdue offense on May 4, tossing a complete game shutout and scattering five hits in eight innings — of the 24 Boilermaker outs, coaxed 20 groundouts, three strikeouts and one flyout… limited the Purdue offense to four hits in the finale (May 5), throwing her second complete game in as many days against the Boilermakers — allowed two runs in 15 innings pitched during her two complete games in the series… tied for league lead with a perfect fielding percentage (1.000)… letterwinner.

2012 as a Sophomore… First team All-Big Ten selection… second team All-Big Ten selection by College Sports Madness… posted a 15-11 record with a 2.04 ERA… had seven shutouts and 24 complete games in 26 starts… had 120 strikeouts over 185.2 innings… limited opposing hitters to a .222 batting average… went 9-3 with a 1.95 ERA in Big Ten play… posted four shutouts and had 52 strikeouts in 89.2 innings… allowed two runs or fewer in 16 starts… allowed five hits or fewer in 12 starts… had a .208 (11-of-53) batting average with eight RBIs and three runs scored… ranked fourth in the Big Ten in ERA (2.04), fifth in opposing batting average (.222), eighth in strikeouts (120), ninth in wins (15) and 10th in innings (185.2)… named the Big Ten Co-Pitcher of the Week on April 23 after going 2-0 with a 0.50 ERA in the series sweep over Michigan State (4/21-22)… tossed a complete game shutout in the opener, scattering four hits and striking out seven… allowed one run on six hits in the finale with two punchouts… went 1-for-2 with two RBIs and a run scored in the season-opener against Wichita State (2/10)… scattered four hits over seven innings in a shutout victory over Texas-Arlington (2/11)… allowed four hits and five runs (0 earned) in the 26-5 win over Iowa State (2/18)… went 4-for-4 with two RBIs and a run scored against the Cyclones at the plate… allowed two runs (0 earned) on five hits, while striking out seven in a 4-2 win over Central Michigan (2/19)… allowed one unearned run on five hits and struck out seven in a 1-0 loss to Cal State Northridge (2/25)… scattered three hits in a 2-0 shutout victory over Virginia (3/16)… allowed one run on six hits in the 5-1 win over Illinois (3/31)… went 7-2 with a 0.88 ERA over her last nine starts with five shutouts… struck out seven and allowed one run on six hits in a 1-0 loss to Drake (4/4)… tossed her second complete game shutout in three starts, allowing no runs on six hits with eight strikeouts against Northern Iowa (4/26)… allowed one run over nine innings in a 1-0 loss to Indiana (4/28)… notched her fifth shutout, allowing two hits over five innings in a 10-0, run-rule win over Indiana (4/29)… tossed her first career one-hitter and sixth shutout in Iowa’s 2-0 victory at Ohio State (5/5)… scattered two hits over eight innings to record her seventh shutout in a 1-0 victory at Minnesota (5/12)… letterwinner.

2011 as a Freshman… Appeared in 35 games with 24 starts… posted a team-best 3.22 earned run average… had 16 complete games, three shutouts and one save… struck out 110 batters in 169.1 innings, while surrendering 77 base on balls… held opponents to a .254 batting average… ranked fifth in the Big Ten in games finished (11)… also was ninth in opposing batting average, innings pitched and appearances and 11th in wins and starts… tied for the Big Ten lead with a perfect 1.000 fielding percentage (53 A, 4 PO)… tossed a complete game shutout in her first career start, scattering four hits and striking out a career-high nine batters against Maryland (2/11)… scattered three hits and struck out six in the complete game win over Idaho State (2/18)… threw complete games in a 2-1 win over Albany (2/25) and in a 7-0 victory over Eastern Michigan (2/26)… retired the first 11 batters of the game against EMU… toss a complete game, allowing two runs on four hits against No. 14 Stanford (3/4)… notched her seventh victory courtesy of a complete game shutout against Colgate (3/15)… scattered three hits in six innings to go along with six strikeouts in the win over South Dakota (3/20)… allowed two runs on four hits in the complete game victory at Ohio State (3/27)… made her first appearance at the plate against Michigan State (4/9)… three a career-high eight innings in the 10-8 victory over Northwestern (4/16).

High School… ESPN Third Team All-American as a senior after posting a 0.32 ERA with a single season school record 250 strikeouts… helped lead team to the first league title in school history… also was a first team all-state, all-Orange County and first team all-CIF selection… closed out her career as the school record holder for career strikeouts with 897… named all-Orange County and the Distinguished Girl Athlete of the spring as a sophomore and junior… also was the Sea View League Most Valuable Player in 2009… was a first team all-league honoree as a freshman… finished with a 0.68 ERA as a freshman, a 0.32 ERA as a sophomore and a 0.70 ERA as a junior… helped the SoCal Athletics ASA team to the 2010 ESPN National Championship… four-year scholar athlete honoree.