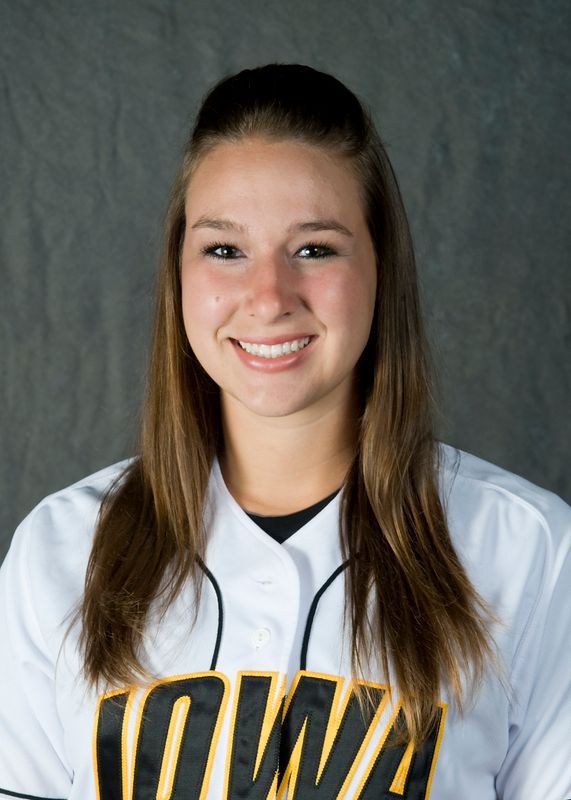 2011 as a Junior… Second team All-Big Ten selection… Academic All-Big Ten honoree… one of two Hawkeyes to play in and start all 51 games… caught every pitch thrown at the catcher position… posted a .294 batting average with a team-best 36 RBI, which ranked 11th in the Big Ten… led the team with nine home runs, a .556 slugging percentage and a .486 on-base percentage… ranked ninth in on-base percentage in the conference… drew 36 walks, which ranked fourth in the league, and tied for fifth with 11 hit by pitches… had 10 multi-hit games and a team-best 11 multi-RBI contests… hit a solo home run in the win over Maryland (2/11)… went 2-for-4 with a home run and a triple against UMBC (2/26)… connected on a grand slam in the 5-1 victory over Cal State Fullerton (3/4)… hit her fourth long ball of the season against Liberty (3/12), going 2-for-3 with two RBI and a run scored… went 2-for-2 with her fifth home run of the season against South Dakota (3/20)… drew three walks in the second game of the doubleheader… tied a career-high going 4-for-4 with three RBI in the opener against Ohio State (3/26)… laced a three-run first inning home run — her sixth of the season — in the 7-2 victory at Ohio State (3/27)… named Big Ten Player of the Week on March 28 after hitting .714 with six RBI and three runs scored against the Buckeyes… had a home run in her second straight game at Western Illinois (3/30)… went 1-for-2 with two RBI in the 5-3 win over Michigan State (4/9) and 2-for-3 with two RBI in the series finale on April 10… reached base in 8-of-9 plate appearances against Northwestern… went 2-for-2 with three RBI and three hit by pitches in the opener before going 2-for-3 with three runs and three RBI with a pair of home runs in the finale… it has her second career two home run game… named Big Ten Player of the Week April 18.

2010 as a Sophomore… Second team All-Big Ten selection… Academic All-Big Ten… played in 47 games with 46 starts, including 41 at catcher and five as the designated player… led team with seven doubles, five triples, .584 slugging percentage, .441 on base percentage and 12 hit by pitch… second on the team with a .328 batting average and a .392 average during conference play… had 10 multiple hit and seven multiple RBI games… 2-for-4 with a home run, double, five RBIs and two runs scored in win over South Dakota (3/21)… 4-for-4 with a home run, double and three RBIs, including game-winning hit against Michigan State (3/28)… named Co-Big Ten Player of the Week (3/29)… hit by pitch in four-consecutive at-bats during two-game series at Penn State.

2009 as a Freshman… Third team All-Big Ten selection… given team’s Most Improved, Coaches and Peg Augspurger Hawkeye Heart Awards… played in 56 games, with 54 starts behind the plate… started the final 34 games… batted .331, and finished second on the team with nine home runs and 45 RBIs… had three home runs and 16 RBIs in Big Ten play… finished with a .604 slugging percentage… committed only one error and recorded a .998 fielding percentage… first-career hit was a solo home run at Texas (2/7)… 2-for-2 with a home run and career-high four RBIs in win over Cornell (March 14)… collected a career-high four hits in win at Ohio State (3/29)… hit walk-off, solo home run in win over Illinois (April 1)… 2-for-3 with go-ahead, three-run home run in win at Northern Iowa (4/21).

High School… Named to six all-state teams during career, including Chicago Tribune first team as a sophomore and Illinois Coaches Association first team as a senior… four-time all-area pick…named all-area co-Player of the Year as a junior… four-time all-conference selection… given conference’s Best Offensive Player award as a sophomore and was a unanimous first team selection as a junior… led high school team to state championship as a freshman in 2005 and was named co-MVP of the state tournament… team also finished third at state tournament in 2007 and was named to the all-tournament team… adidas top 100 recruit… NIAAA Female Athlete of the Year in Illinois as a senior… team captain as a senior… set school record for RBI in a season (52) as a sophomore… batted .514 as a senior… high school coach was Tracy Logue… played for the Q.C. Firebirds from 1999-2005 and club team was nominated for the ASA Hall of Fame… also played for the Heartland Havoc from 2006-08… lettered in volleyball and basketball… holds volleyball school record for blocks in a season (152)… holds three basketball school records… named first team all-state and was an all-conference and all-area pick three times in basketball… class valedictorian… academic all-state as senior… three-time academic all-conference… super 60 student athlete in 2008… member of the National Honor Society… also member of the French National Honor Society.