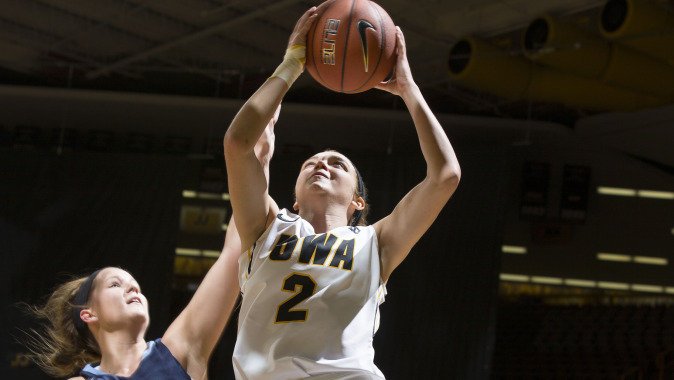 THE SETTING:
The 19th-ranked University of Iowa women’s basketball team opens the 2014-15 season this weekend, hosting USC Upstate on Friday at 6 p.m. (CT) and Robert Morris on Sunday at 2 p.m., on Mediacom Court at Carver-Hawkeye Arena. Friday’s contest is part of a women’s/men’s doubleheader.

TELEVISION:
Sunday’s game can be seen locally in the state of Iowa on Mediacom Connections (MC22) and also via BTN Plus. Rob Brooks and Shelley Till will call the action.

HAWKEYES IN SEASON OPENERS:
Iowa is a perfect 14-0 in season openers under head coach Lisa Bluder. Friday will mark the 12th time in Bluder’s 15 years that the Hawkeyes open the season at home.

IOWA ROLLS IN EXHIBITION:
The Hawkeyes defeated St. Ambrose on Nov. 9 in an exhibition in their first appearance of the year, 119-57. Thirteen Iowa players saw action, and 12 scored. Bethany Doolittle (21 points), Melissa Dixon (19), Ally Disterhoft (18), and Chase Coley (11) scored in double figures. The Hawkeyes shot 53 percent from the field (41-of-78), 83 percent from the line (24-of-29), and made 13-of-26 3-pointers. Iowa registered 28 assists, while only surrendering nine turnovers.

SCOUTING USC UPSTATE:
? USC Upstate has been picked to finish fourth in the A-Sun.
? Junior center Brittany Starling has been selected to the preseason A-Sun All-Conference Team for the second-straight year.
? The Spartans finished 17-15 a year ago and competed in the WBI Tournament.
? Friday’s contest also marks the season-opener for USC Upstate. The Spartans will travel to Iowa State on Sunday.
? USC Upstate is coached by Tammy George. George, the all-time leader in victories at USC Upstate, is beginning her 12th season overall as a head coach and 10th at the helm of the Spartan program.

SCOUTING ROBERT MORRIS:
? The Colonials went 21-12 in 2014 and won the Northeast Conference tournament and regular season championship before falling to Notre Dame in the First Round of the NCAA Tournament.
? Robert Morris has been picked to win the NEC again this season.
? Sunday’s contest marks the season-opener for Robert Morris. The Colonials will travel to Illinois on Tuesday.
? Robert Morris is coached by Sal Buscaglia. Buscaglia, now in his 12th season, has led the Colonials to six national tournaments, three Northeast Conference championships and playoff berths in nine of his 11 seasons.

HAWKEYES 19TH IN RANKINGS:
Iowa is ranked No. 19 in the Preseason Associated Press Top-25 poll and the USA Today Preseason Coaches poll. The Hawkeyes finished the 2013-14 season ranked 19th in the AP Top-25 poll, and 26th (receiving votes) in the USA Today Coaches poll. Iowa was ranked for eight weeks last season in the AP poll, and received votes in nine additional weeks.

The Big Ten is tied with the ACC for the most ranked teams in the AP poll (five). Ten different Big Ten teams received votes in the Associated Press or USA Today Coaches’ preseason top 25 polls, led by Maryland at No. 10/8 (AP/USA Today). Michigan State is ranked No. 14/15 and is followed by No. 16/16 Nebraska, No. 19/19 Iowa and No. 24/- Rutgers. Minnesota, Northwestern, Penn State, Ohio State and Purdue also received votes in at least one poll.

NCAA STREAK BEST IN BIG TEN:
Iowa is the only Big Ten team, and one of only 14 teams in the country, to appear in the last seven NCAA Tournaments. There are 343 Division I teams. Iowa is 1-of-21 teams to advance to the Second Round of the NCAA Tournament in each of the last two seasons. The Hawkeyes, a No. 6 seed in the 2014 NCAA Tournament, defeated 11th-seeded Marist in the First Round, 87-65, marking the fourth-largest margin of victory in an NCAA Tournament game in program history.

IOWA PICKED 3RD; LOGIC NAMED ALL-BIG TEN:
Iowa has been picked to finish third behind Maryland and Michigan State in the 2014-15 Coaches Big Ten preseason rankings, while senior Samantha Logic has been named preseason All-Big Ten by league media and coaches. Logic earned honorable mention All-America honors from the Associated Press and the WBCA as a junior last year. The Racine, Wisconsin, native was a unanimous first team All-Big Ten selection by the coaches, and a first team selection by the media to become the 18th Iowa player to garner first team All-Big Ten honors — the most of any Big Ten program.

SEASON IN REVIEW:
The University of Iowa women’s basketball team finished the 2013-14 campaign with a 27-9 overall record, including an 11-5 mark in Big Ten play. Iowa finished tied for fourth in the league with Purdue.

The Hawkeyes were an at-large selection for the NCAA Tournament, earning a No. 6 seed and hosting the First and Second rounds. Iowa defeated No. 11 seed Marist, 87-65, in the First Round, marking the fourth-largest margin of victory in an NCAA Tournament game in program history. The Hawkeyes fell to No. 3 seed and fourth-ranked Louisville, 83-53, in the Second Round.

OTHER 2014 HIGHLIGHTS:
? Lisa Bluder surpassed C. Vivian Stringer as Iowa’s all-time winningest coach on Feb. 10 as the Hawkeyes defeated Northwestern, 90-84.
? Three Hawkeyes – Samantha Logic, Kali Peschel, Kathryn Reynolds – named Academic All-Big Ten (Iowa has earned 67 Academic All-Big Ten honors under head coach Lisa Bluder, tying for the third-most in the conference during that time span.)
? Logic was named an honorable mention All-American by the Women’s Basketball Coaches Association (WBCA). Logic becomes the first Hawkeye to earn WBCA All-America honors since Kachine Alexander (honorable mention) in 2010 and 2011.
? Logic was named an honorable mention All-American by the Associated Press. Logic was 1-of-49 NCAA Division I players to earn Associated Press All-America honors. Sam is the first Hawkeye to garner AP All-America Honors since Alexander and Jaime Printy in 2011 (honorable mention).
? Logic, the Big Ten leader in assists, notched three triple-doubles last season, becoming the first Big Ten player to record three triple-doubles in a single season.
? Logic ranked second nationally in triple-doubles. Entering the 2013-14 campaign, there had only been 11 seasons in NCAA history in which a player registered three or more triple-doubles.
? Logic was named 1-of-22 watch list finalists for the 2014 Nancy Lieberman Award.
? The Hawkeyes advanced to the Big Ten Tournament title game for the fourth time in program history.
? Bethany Doolittle, Samantha Logic, and Ally Disterhoft were named to the Big Ten all-tournament team. Disterhoft became the first Iowa freshman ever named to the team.
? Three Hawkeyes — Samantha Logic, Bethany Doolittle, and Ally Disterhoft — received All-Big Ten recognition. Logic was a unanimous first team selection by the coaches, and a first team selection by the media. Doolittle garnered second team honors from both the coaches and media, and was named to the All-Defensive team. Disterhoft was 1-of-5 league rookies named to the All-Freshman team, while also garnering honorable mention all-league accolades. Senior Theairra Taylor earned Iowa’s Sportsmanship Award nomination. Logic becomes the 18th Iowa player to garner first-team All-Big Ten honors, marking the most of any Big Ten program. Kachine Alexander was the last Hawkeye to earn first team honors (2010, 2011).
? Logic surpassed Cara Consuegra (1997-2001) as Iowa’s all-time assists leader and became the 31st 1,000-point scorer in program history. She was named Big Ten Player of the Week three times.
? Iowa won at No. 9 Penn State on Feb. 6, 73-70, marking the Hawkeyes’ first win over a top-10 team away from Iowa City since defeating No. 7 Purdue, 75-70, in the 2001 Big Ten Tournament title game (March 4, 2001), and Iowa’s first in a true road game since winning at No. 9 Southern California, 50-49, on Dec. 30, 1993.
? Samantha Logic (assists), Melissa Dixon (3-pointers), and Bethany Doolittle (blocks) all set new single-season program records.
? Dixon finished with seven 3-point field goals in wins over Syracuse and UNC-Wilmington, tying a personal and school record; the feat has been accomplished five times in program history (twice by Dixon).
? Iowa defeated Idaho State on Dec. 7, 95-47, converting a school record 17 made 3-point field goals. The previous record was 14, last accomplished on Dec. 22, 2011, against Mississippi Valley State.
? Iowa led the Big Ten in scoring average and assists.
? The Hawkeyes shattered the school record for total assists in a season (644).
? The Hawkeyes also set the school record for scoring offense in 2013-14 (78.2), leading the league in scoring while scoring the second-most points in a season in Big Ten history (2,814).
? Kathryn Reynolds was nominated for the Women’s Basketball Coaches Association (WBCA) Allstate Good Works Team. She was 1-of-84 WBCA nominees for the prestigious award and 1-of-5 student-athletes from the Big Ten.
? The Hawkeyes won the Mayan Division at the Cancun Challenge and captured the Hawkeye Challenge title.

MOVING UP CAREER CHARTS:
? Samantha Logic (622 career assists) surpassed Cara Consuegra (1997-2001; 576) as Iowa’s all-time assists leader during Iowa’s win at Illinois on March 2 in the regular season finale. She ranks ninth in Big Ten history.
? Melissa Dixon is fifth in 3-pointers on Iowa’s all-time list (210). She surpassed Kristi Smith during Iowa’s game at Purdue on Feb. 16. Wendy Ausdemore is fourth all-time with 221.
? Bethany Doolittle is third all-time with 184 career blocks. She surpassed Megan Skouby who is now fourth with 150, during Iowa’s game against Nebraska on Feb. 1. Tangela Smith is second with 235.

ANOTHER TOP ATTENDANCE YEAR:
Iowa ranked 22nd in the country in attendance last season, averaging 4,395 fans per contest. Last year marks the fourth-straight season that Iowa has ranked inside the top 25 in attendance. The Hawkeyes were 19th in attendance in each of the previous two years, and were 13th in 2010.

UP NEXT:
Iowa hosts Pepperdine, UT Martin, and Dayton in the Hawkeye Challenge at Carver-Hawkeye Arena, Nov. 21-22.