A Visit to Remember 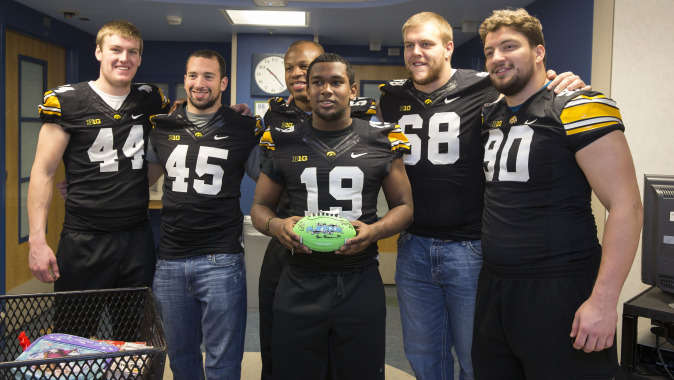 IOWA CITY, Iowa — They are members of a football team that won seven games and was in the hunt for a Big Ten Conference West Division title late into the month of November (Win.).

On Monday, the Hawkeyes took time from preparing for the TaxSlayer Bowl to spread cheer on two floors at the University of Iowa Children’s Hospital (Do It Right.).

It is an annual journey for select football players as they make the short trip from the new Richard O. Jacobson Football Operations Building to UICH. This year the special guests — who donned their black, home game jerseys — were senior captains Quinton Alston, Brandon Scherff, Louis Trinca-Pasat, and Mark Weisman, and true freshmen Ben Niemann and Miles Taylor.

Most first and second-year players purchase the gifts and player representatives deliver them to unsuspecting — and grateful — patients. The first visit Monday was to Caylee, a girl from West Elgin, Illinois.

“OMG, is that a walking dog?” Caylee said when the Hawkeyes handed her a toy. “I like it. I’m going to take it on a walk when I get home.”

It has been 20 days since Caylee has been able to walk her real dog, a 75-pound labrador retriever named Mo. When the players left her room, Caylee shuffled through photos of Mo on her tablet.

“We are going to turn into Iowa fans,” said Caylee’s mother, Diane.

Chic Ejiasi, director of player development, wheeled a cart from the general pediatrics unit to the hematology/oncology unit. It was loaded with presents like a stuffed lion from Parker Hesse, a Frozen purse set from Ike Boettger, a Captain America action figure from Jake Hulett, a miniature football from Brandon Snyder, and a military play set from Solomon Warfield.

“It’s a rewarding, eye-opening experience,” Ejiasi said. “To see the reaction from the kids in the hospital is special.”

According to Ejiasi, members of the Hawkeye football program have volunteered a total of 1,078 hours since Jan. 1.

Preston from Davenport, Iowa, is a Hawkeye fan who watched every game this season on television. He will watch the TaxSlayer Bowl on Jan. 2 as well. On Monday, prior to going into surgery, he met six of his heroes, who handed him a remote control helicopter that was donated by linebacker Andrew Cerney.

“This is a nice boost, especially before surgery,” Preston said. “It cheers me up.”

Nathan from Burlington, Iowa, nearly slipped into a diabetic coma Friday. He was rushed to UICH, where three days later he was surrounded by Hawkeyes. Nathan received a monster truck (via Lucas LeGrand), but he forgot one thing…to pose for a photograph with the players. So Nathan hopped out of bed and walked the hall until he found the group, who supportively encircled him in front of cameras and smart phones.

“It’s awesome they do this and they’re the ones that contact us,” said Kathy Whiteside, certified child life specialist at the UICH. “I don’t think the players realize what an impact it makes on the kids. But it is also good for the players to see what is going on in this hospital that overlooks Kinnick Stadium.”

There was a method to selecting Monday’s group that represented the Hawkeyes. The four veteran team captains were with two first-year student-athletes for a reason.

“We want everyone to get used to coming out, so we make sure the young guys are involved, too,” Ejiasi said.

Taylor, who is from Silver Spring, Maryland, said the day warmed his heart.

“All these kids are in such hard times and to see the look on their faces and watch them get excited is a great experience for me,” Taylor said.

Louis Trinca-Pasat was named second-team All-Big Ten by league coaches and was the league Defensive Player of the Week for his performance during a 48-7 win against Northwestern on Nov. 1. He earned a master’s degree on Dec. 19. During his career, he has accumulated volunteer hours by visiting hospitals, cutting down trees, and fixing parks. Monday could have been his final opportunity for philanthropy as a member of the Hawkeye football family.