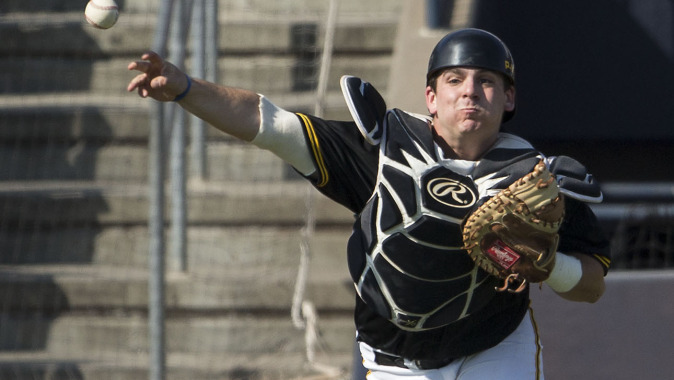 IOWA CITY, Iowa — It’s a new territory for University of Iowa junior Jimmy Frankos, as he enters the 2015 season as the Hawkeyes’ starting catcher.

“It’s different coming in as a starter right away, but as far as the game and how I approach it, it will all be the same,” said Frankos, a native of Park Ridge, Illinois. “At the end of the day, it is baseball and my mentality is going to be the same.”

A season ago, Frankos was Iowa’s third-team catcher at the start of the year, backing up Trevor Kenyon and Blake Hickman. After a knee injury forced Kenyon to the dugout and Hickman made the full-time move to the mound, Frankos found himself thrust into the lineup, and he pounced on his opportunity.

The experience has Frankos’ confidence beaming heading into the 2015 season.

“Being able to see all the difference pitchers on our staff and getting my foot into Division I baseball boosted my confidence,” he said. “Last year proved that I can compete at this level, and I am confident I can carry that over into this year.”

During the offseason, Frankos focused on his improving his arm strength to help him better slow down opposing running games — base stealers had an 84.4 percent success rate in 2014 — and to stay healthy for the duration of the season.

“Last year, my arm got a little tired (toward the end of the year),” he said. “I worked with coach (Scott) Brickman and coach (Jeff) Clement to tweak some things in my throwing motion. I think the work I have done has helped me improve and will help me to last throughout the entire season.”

Frankos has also taken on a larger leadership role with the Hawkeyes. He is the only returning catcher and one of four on the roster at the position along with a trio of newcomers in freshmen Austin Guzzo, JT Sole, and junior-college transfer Daniel Aaron Moriel.

Frankos learned the ins-and-outs of Division I baseball from Dan Sheppard and Keith Brand during his first season as a Hawkeye, and he’s trying to help the newcomers do the same.

Frankos believes the addition of Clement, a former Major Leaguer who is in his first season as the team’s volunteer assistant, has already paid dividends to his growth as a catcher.

“It has been awesome working with him,” said Frankos. “He gives us so much knowledge. Being able to work with him, even in the short amount of time we’ve been together, I have improved my game and the other catchers have as well.

“I am looking forward to going through a season with him and improving every day.”