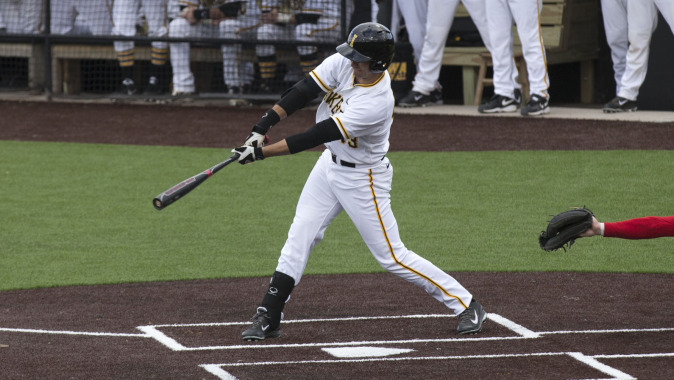 MURFREESBORO, Tenn. — Redshirt junior Taylor Kaufman drove in the game-winning run in the top of the sixth inning to send the University of Iowa baseball team to a 2-1 victory over Middle Tennessee State on Saturday afternoon at Reese Smith Jr. Field.

The win is the Hawkeyes’ eighth straight — the longest winning streak since 2012 — and it improves the team’s record to 8-1 this season.

With the game knotted at one, senior Kris Goodman led off the sixth inning with a triple to centerfield. With one out, Kaufman executed when the Hawkeyes needed it, driving in Goodman with an RBI groundout to second base to give Iowa a 2-1 lead.

The Hawkeyes turned to the bullpen in the bottom inning, bringing in junior Ryan Erickson in relief. The southpaw scattered three hits over the final four innings to record his first career save. Erickson, who had four strikeouts against one walk, is now 1-0 with a 0.82 ERA in four appearances this season.

Junior Tyler Peyton (2-0) went five innings in the start to notch his second win of the season. The right-hander allowed one run on six hits and finished with five strikeouts to two walks. Peyton has thrown five innings in each of his four starts.

After leaving a pair of runners stranded in the second inning, the Blue Raiders broke through to plate the game’s first run in the third. Nine-hole hitter Kevin Dupree got things going with double down the right field line before scoring on a one-out RBI single from Brad Jarreau, making the score 1-0.

Iowa answered immediately, tying the game in the top of the fourth, but missed a golden opportunity for more. Senior Jake Mangler started things off with a leadoff single and stole second to move into scoring position with one out. Goodman then tied the game with an RBI single to centerfield.

The Hawkeyes went on to load the bases against MTSU starter Jonathan Frebis courtesy of a Joel Booker hit by pitch and a Kaufman single, but Iowa came up empty. Junior Jimmy Frankos lined out to third base for the second out before pinch hitter Devin Pickett struck out swinging to leave the bases loaded and end the inning.

Iowa finished with seven hits in the game with four coming from Goodman and Mangler. Goodman finished 2-for-4 with an RBI and run scored for his team-best third multi-hit game, while Mangler was 2-for-4 with a run and stolen base. Goodman and senior Eric Toole ran their reached base streak to eight games.

Frebis (2-1) took the loss — his first loss of the year — after allowing two runs on six hits over six innings. He had three strikeouts to one walk.

Game two of the Saturday doubleheader is currently underway.