Erickson 'Lucky' to Be a Hawkeye 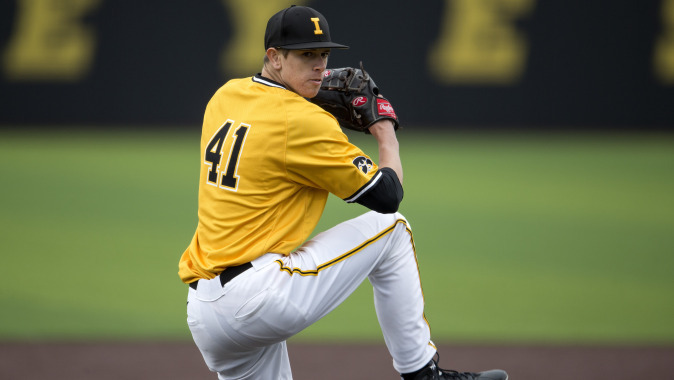 IOWA CITY, Iowa — University of Iowa junior Ryan Erickson was content on being a traditional college student last spring until he ventured to Duane Banks Field to catch his first Hawkeye baseball game.

He had a tough time watching.

“It was awful,” said Erickson, a left-handed pitcher from Mason City, Iowa. “It clicked there. I needed to be a part of the team.”

After having a standout prep career at Mason City High School, Erickson took his talents to Johnson County (Kansas) Community College in 2013. His freshman season didn’t go well, as he threw just 9 2/3 innings, his velocity was down, and his baseball future was spiraling downward.

Erickson elected to toss the cleats aside and focus on his academic future, transferring to the University of Iowa as a student to concentrate on obtaining a degree in computer science.

“It was a hard decision, but it wasn’t as hard as you would think with how negative things were for me,” he said. “I was losing weight, my velocity was down, and wasn’t happy with the (Johnson County) program. I didn’t think I had the tools or skills to get better, so I figured I had better get a degree, so I could get a job (down the road).”

During his first semester at the UI, it wasn’t as hard living without the sport he grew up playing, but when the first season without baseball rolled around in the spring, he felt a void. It was strange not suiting up and playing games, and it wore on him as the year went on.

Erickson’s first game as a spectator at Banks Field sparked a desire to return. It was a thought that was in the back of his mind when he was lifting weights and getting stronger. Just maybe he would have enough improved velocity to give him a chance to play again, this time at the Division I level.

A few weeks before the 2014-15 school year, Erickson emailed UI pitching coach Scott Brickman with his story and expressing a desire to be a Hawkeye. After meeting with Brickman and head coach Rick Heller, an extended tryout was offered, but nothing was guaranteed.

“They told me they would give me an opportunity,” said Erickson. “If I did well I could make the team, but the whole fall was an audition.”

Erickson threw in the low 80s as a high school pitcher, so he was blown away when he clocked in in the high 80s early in the fall. By the time Pro Scout Day rolled around in late September, he hit 91 on the radar gun, and his velocity has continued to rise.

“I had never thrown that hard before,” said Erickson. “I was shocked when the coaches told me I hit 91. I couldn’t believe it.”

Fast forward to this spring and Erickson has been one of Iowa’s top relief pitchers, compiling a 4-0 record with a 2.32 ERA over 31 innings with one save. Erickson notched his fourth victory May 1 at Michigan, throwing a career-best 5 2/3 innings, scattering five hits, and allowing two runs.

Now, instead of being solely a college student, Erickson has scouts inquiring about his future, and he’s helping the Hawkeyes to their best baseball season in 25 years.

“Since I sat out last year, if you were to tell me I would be pitching and have thrown a good amount of innings, I wouldn’t believe it,” he said. “It is crazy to see my name in the stat lines and pitching. I am lucky.

“With any other coach, I don’t think I would be on this team. Coach Heller is one of the few coaches that gives everyone a fair shot at the beginning of the year to get playing time. I had a good fall season, and it’s working out now.”