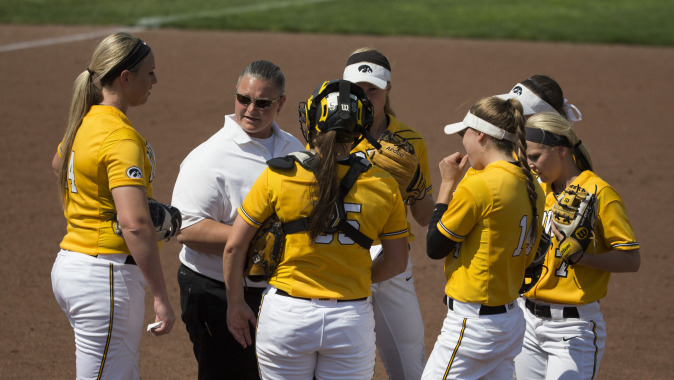 IOWA CITY, Iowa — The University of Iowa softball team has navigated the 11th-most difficult strength of schedule in the country, played 15 ranked opponents, including 10 games against teams ranked in the top six, and faced quality Big Ten Conference opponents this season.

The hard work and experience against the best of the best has paid off, as the Hawkeyes earned the opportunity to continue to play in the postseason at the Big Ten Tournament on May 7-9. Iowa enters the weekend as the No. 10 seed after posting an 8-15 record in conference action.

“I’m excited to hit the road and open up Big Ten Tournament play at Ohio State,” fifth-year head coach Marla Looper said. “It’s going to be interesting to see the dynamic now with the addition of Maryland and Rutgers to the conference.”

The Hawkeyes meet seventh-seeded Rutgers, who posted an 11-12 mark in Big Ten play, on Thursday, May 7 at 7 p.m. (CT). The game, which will air live on the Big Ten Network, marks the first meeting between the two institutions since 2010.

“I’m excited, we haven’t seen Rutgers all year long,” Looper said. “It’s our first time playing each other, and I think we match up well.

“I’ve been looking forward to stepping on the field, seeing what our kids have, and seeing that grit and determination that they will need to get through this tournament.”

Iowa leads the all-time series against Rutgers, 4-0, including a 7-0 victory at the Littlewood Classic in Tempe, Arizona, in 2010. In 2015, both have similar strengths.

Each team has a clear ace in the circle. For Iowa, its redshirt sophomore Shayla Starkenburg who leads the Hawkeyes in appearances, innings pitched, starts, complete games, shutouts, ERA, wins, and strikeouts. She also tossed the program’s 17th no-hitter and the first since 2010, and has more than tripled her strikeout total from a season ago.

The ace in the circle for the Scarlet Knights is senior Alyssa Landrith. She paces the team in wins, ERA, appearances, starts, complete games, innings pitched, and strikeouts.

The Hawkeyes have a senior leader of their own in shortstop Megan Blank. She became the second player in program history to earn four first-team All-Big Ten accolades on Wednesday, and was named to the All-Defensive Team for a second-consecutive season.

“Megan has been a cornerstone of our program in the last four years,” Looper said. “She’s someone you want up to bat when the game is on the line, and she’s also the one you want people to hit the ball to because she’s solid defensively.

“She does a nice job of leading by example, and is going to go out there and get it done. She leads with a very calm demeanor.”

With an opening round win over Rutgers, Iowa will advance to face No. 2 seed Minnesota on Friday at 7 p.m.