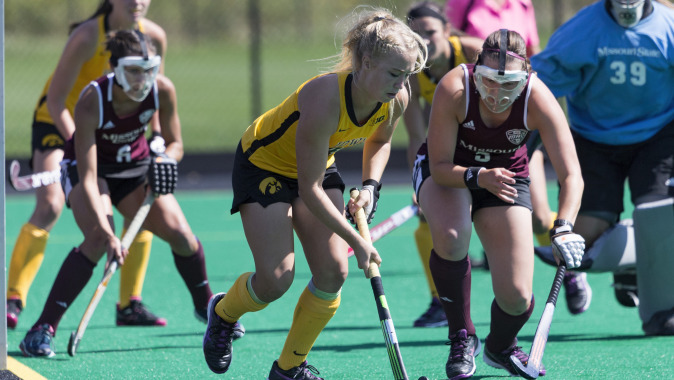 THIS WEEK
The 18th-ranked University of Iowa field hockey team remains on the road this week when it travels to Evanston, Illinois, to take on No. 14 Northwestern. The Hawkeyes look to pick up their second conference win of the season against the Wildcats on Friday at 2:30 p.m. (CT).

SCOUTING NORTHWESTERN
? The Wildcats enter this week’s conference showdown with an 8-4 overall record and a 1-2 record in conference play.
? Three of Northwestern’s four losses this season have come against teams ranked in the top-10 (No. 1 Connecticut, No. 5 Duke, and No. 10 Maryland). Northwestern’s four losses have come by a combined six points, including three losses by one goal.
? On Friday, Iowa will be the fifth ranked opponent Northwestern has faced this year.
? The Wildcats have allowed 19 goals in 12 games played. They have a 1.58 goals against average that ranks 17th in the country and second in the Big Ten.
? Northwestern’s roster features four players that have scored six or more goals this season, led by junior Isabel Flens. Flens is tied for fourth in the country with 11 goals. Her 27 points are tied for fifth nationally.

Northwestern VS. IOWA — THE SERIES
? Iowa is 52-21-4 all-time against Northwestern, including 22-12-2 in away contests.
? In the first ever meeting between the two schools (1978), the Wildcats topped the Hawkeyes, 3-2.
? Northwestern has won three in a row against Iowa. Last season the Hawkeyes and Wildcats met twice; once during the regular season, and again at the Big Ten Tournament.
? Since 2004, Iowa and Northwestern have gone into overtime four times (2004, 2009, 2012, 2013). Iowa is 2-2 in those games.
? Iowa and Northwestern have a rich postseason history, having met nine times in the NCAA Tournament. The Hawkeyes hold a 5-4 advantage in those games.

IN THE RANKINGS
Iowa is ranked 18th in the Penn Monto/National Field Hockey Coaches Association (NFHCA) Division I Poll, released on Sept. 29. The Hawkeyes garnered 124 points in the rankings and are one of four ranked Big Ten schools — Maryland (No. 8), Northwestern (No. 14), and Michigan (No. 16). Iowa has been ranked in the polls each week dating back to Sept. 6, 2011.

LOOKING BACK
On Sept. 25, the Hawkeyes had their four-game win streak snapped at Indiana, falling to the Hoosiers, 3-1. Down 2-0, Iowa fought back to pull within one when junior Stephanie Norlander — the Big Ten’s leading goal scorer — notched her 11th goal of the year to put Iowa on the board with 11 minutes left to play. Sophomore Melissa Progar was credited with the assist. Indiana held on to the momentum, however, sealing the 3-1 victory on a goal in the 69th minute.

On Sept. 20, Norlander and sophomore Veronique Declercq combined to score four goals to propel the Hawkeyes to a 6-1 victory over Ball State — the Hawkeyes have scored six or more goals three different times this season. Junior Chandler Ackers and sophomore JoElla Guagliardo also scored for the Hawkeyes.

WHAT A SUMMER IT WAS A second-team NFHCA All-American and first-team All-Big Ten honoree in 2014, junior Stephanie Norlander highlights what was a busy summer for several Hawkeyes. A native of North Vancouver, Canada, Norlander competed for the Canadian National Field Hockey Team at the World League 3 semifinals in Valencia, Spain as well as the 2015 Pan American Games, where she helped the Canadians to a third place, bronze medal finish. She scored three goals in Canada’s Pan Am opener against the Dominican Republic en route to a 12-1 victory.