Iowa Travels to Michigan for a Pair of Contests 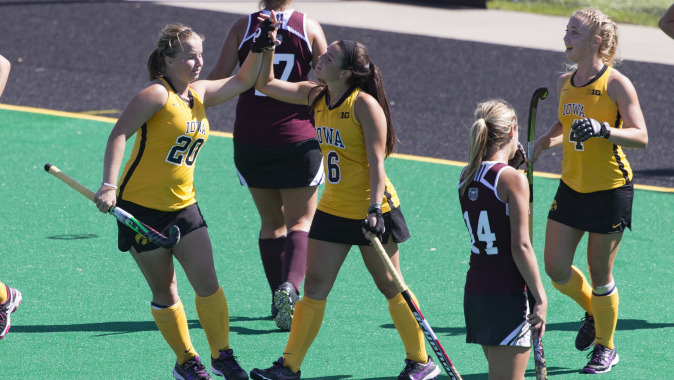 THIS WEEK
The 20th-ranked University of Iowa field hockey team wraps up a five-game road trip this weekend when it travels to the state of Michigan. The Hawkeyes face 16th-ranked Michigan on Friday at 6 p.m. (CT) before concluding the weekend with a nonconference showdown at Central Michigan at 11 a.m. (CT) on Sunday.

LIVE STREAMING
Iowa field hockey fans can follow all contests via live stats on hawkeyesports.com. Click on the “GameTracker” or “Live Stats” link found on the field hockey schedule page to access the live stats feed.

SCOUTING MICHIGAN
? The 16th-ranked Wolverines enter Friday’s contest with a 9-3 overall record and rank second in the Big Ten standings at 3-1.
? Michigan is riding a six-game home winning streak, stretching back to its Vermont win on Sept. 11. After opening its season with back-to-back losses against North Carolina and Wake Forest at Ocker Field, the Wolverines have claimed nine of their last 10 outings. Michigan has outscored its home opposition, 21-9, over its last eight games.
? Sophomore goalkeeper Sam Swenson was named the Big Ten’s Co-Defensive Player of the Week after posting seven saves and allowing just one goal in weekend wins against Pacific and Indiana. It marks Swenson’s second defensive weekly accolade of the season.
? As a team, Michigan leads the Big Ten with just 12 goals allowed — seven fewer than any other conference school.
? Senior Shannon Scavelli leads the Wolverines with six goals this season.

MICHIGAN VS. IOWA — THE SERIES
? Iowa is 40-21 all-time against Michigan, including 17-8 when playing in Ann Arbor.
? In the first ever meeting between the two schools (1978), the Hawkeyes topped the Wolverines, 2-0.
?Since 2010, the Hawkeyes have gone 1-7 against the Wolverines. Iowa last defeated Michigan in 2013, when the Hawkeyes won 1-0 in the opening round of the Big Ten Tournament.
?Since Oct. 1, 2011, Iowa and Michigan have both been ranked when facing each other (six games).

SCOUTING CENTRAL MICHIGAN
? Central Michigan enters Sunday’s nonconference showdown with an 0-11 overall record.
? The Chippewas are 0-2 against Big Ten opponents this season. They fell to No. 19 Michigan State, 5-1, on Aug. 29 and No. 9 Northwestern, 7-0, on Sept. 12. Iowa is the third ranked opponent Central Michigan will face this season.
? Central Michigan is being outscored by its opponents, 57-11, through 11 games. Opponents are averaging 4.55 goals per game against the Chippewas
? Senior Kaysie Gregory leads Central Michigan offensively, having scored seven goals to go along with two assists.

CENTRAL MICHIGAN VS. IOWA — THE SERIES
?Iowa leads the all-time series, 9-0.
? The Hawkeyes have shutout the Chippewas six different times and have outscored them 35-4 in nine games.
? Iowa and central Michigan last met in 2013, when the Hawkeyes trounced the Chippewas, 7-1, in Iowa City.

IN THE RANKINGS
Iowa is ranked 20th in the Penn Monto/National Field Hockey Coaches Association (NFHCA) Division I Poll, released on Oct 6. The Hawkeyes garnered 64 points in the rankings and are one of four ranked Big Ten schools — Maryland (No. 8), Northwestern (No. 14), and Michigan (No. 16). Iowa has been ranked in the polls each week dating back to Sept. 6, 2011.

LOOKING BACK
On Oct. 2, Iowa fell against 14th-ranked Northwestern, 4-0.

Entering halftime, the Hawkeyes found themselves trailing, 1-0. The Wildcats dominated the first half, outshooting Iowa, 10-2, and holding a 9-0 advantage in penalty corners.

In the second half, Iowa outshot Northwestern, 7-5, and outgained them in penalty corners, 5-1. However, the Hawkeyes were unable to score as the Wildcats added three second half goals to secure the 4-0 victory.

LOOKING AHEAD
The Hawkeyes return to Iowa City next weekend when they host a pair of Big Ten foes in Michigan State (Oct. 16) and Ohio State (Oct. 18).