Haden Advances to Round of 32 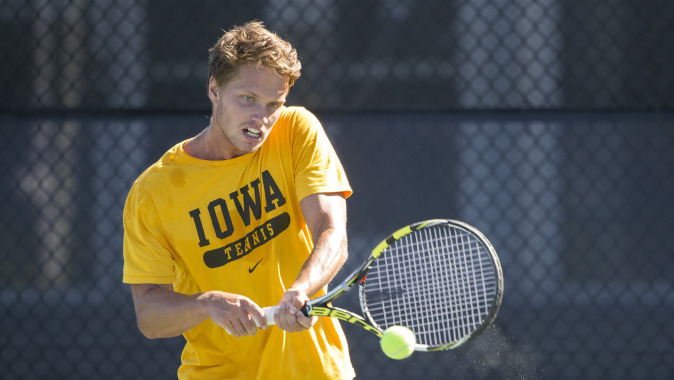 FAYETTEVILLE, Ark. — University of Iowa junior Robin Haden advanced to the round of 32 at the ITA Regional Championships following a pair of opening round victories on Thursday.

“Haden is playing great tennis right now and has a great opportunity to reach the round of 16,” said head coach Ross Wilson.

“I really liked the fire that Jake played with today. He lost a tough match to a great player in the second round,” said Wilson.

Sophomore Lefteris Theodorou made the round of 64 by topping Pete Molloy (SIUC), 6-4, 6-3. Theodorou suffered defeat in his next match, dropping both sets, 6-1, 6-3, to Santiago Munoz (ARK).

Junior Nils Hallestrand suffered defeat in his first match of the day at the hands of Haru Inoue (WS), 7-6, 6-3. His consolation match against Scott Elasass (NEB) begins at 11 a.m. Friday.

Doubles play begins tomorrow with six Hawkeyes in the mix. Theodorou/Jacoby start the morning off against the Nebraska duo of Zitsch/Dzulnsky at 9 a.m.

First serve of the Haden/Patrick match against Rodhe/Santamaria (UMKC) is set for 10 a.m. Hallestrand/Larsen received a first round bye.