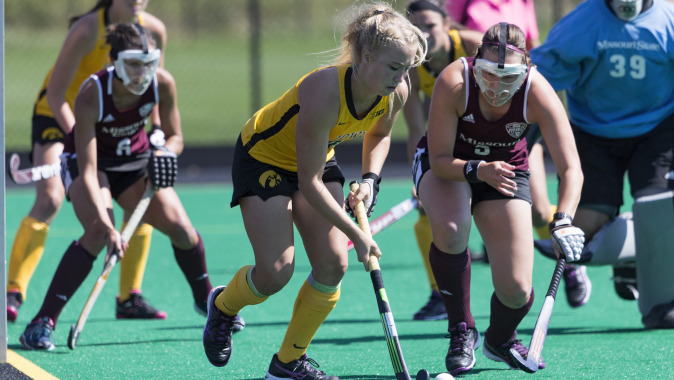 THIS WEEK
The University of Iowa field hockey team begins postseason play this week at the 2015 Big Ten Tournament. The seventh-seeded Hawkeyes (9-9, 2-6) will face No. 2-seeded and 10th-ranked Michigan (15-3, 7-1) in the opening round on Thursday, Nov. 5, at 2 p.m. (CT). This year’s tournament is held at Indiana University in Bloomington, Indiana. The winner of Thursday’s contest advances to face Indiana or Penn State in the second semifinal on Friday at 3 p.m. For complete coverage of the Big Ten Tournament, visit http://bit.ly/1H3nSv9.

Hawkeyes in the B1G Tournament
The Hawkeyes have won five Big Ten Tournament titles (1981, 1994, 2006, 2007, 2008) in program history, including three-straight from 2006-08. Iowa joins Penn State and Michigan as the only schools to win five or more tournament titles. Iowa is 29-17 (.630) all-time in the conference tournament. The 29 wins are the most by any Big Ten school. In 2014, the Hawkeyes fell to eventual tournament champion Northwestern, 2-1, in the quarterfinals.

MICHIGAN VS. IOWA — THE SERIES
• Iowa is 40-22 all-time against Michigan, including 12-4 when playing in neutral site contests.
• Iowa and Michigan met in the regular season on Oct. 9 in Ann Arbor, Michigan. The Wolverines came away with a 4-0 shutout victory.
• In the first ever meeting between the two schools (1978), the Hawkeyes topped the Wolverines, 2-0.
•Since 2010, the Hawkeyes have gone 1-8 against the Wolverines. Iowa last defeated Michigan in 2013, when the Hawkeyes won 1-0 in the opening round of the Big Ten Tournament.

BIG TEN IN THE RANKINGS
Three of nine Big Ten schools are ranked in the Penn Monto/National Field Hockey Coaches Association (NFHCA) Division I Poll, released on Nov. 3, including Maryland (No. 7), Michigan (No. 10), and Northwestern (No. 17).

LOOKING BACK
The Hawkeyes fell in heartbreaking fashion for the third time this season, losing at home to No. 6 Maryland in double overtime on Oct. 31. The Hawkeyes and Terrapins battled toe-to-toe before Maryland’s Lein Holsboer scored the game-winning goal in the 87th minute. Sophomore Mallory Lefkowitz scored Iowa’s lone goal in the loss.

TWO SCOOPS, PLEASE
The Hawkeyes have had four players score two or more goals in a single game this season. Junior Stephanie Norlander leads the way with five, including her second career hat-trick against Saint Louis on Sept. 13. Junior Chandler Ackers and freshman Makenna Grewe have each notched a pair of two-goal games, followed by sophomore Veronique Declercq who has one. The four have combined to score 33 of Iowa’s 42 goals this year.

WELCOME BACK, JESS
Head coach Lisa Cellucci announced the addition of former Hawkeye Jessica Barnett to her staff in late July. Iowa’s 2012 and 2013 female Athlete of the Year, Barnett will serve as a volunteer assistant coach. A four-year starter for the Hawkeyes from 2009-12, Barnett was a two-time All-American and a three-time All-Big Ten, All-Region, and Big Ten All-Tournament team selection. She helped the Hawkeyes earn back-to-back NCAA tournament appearances in 2011-12.