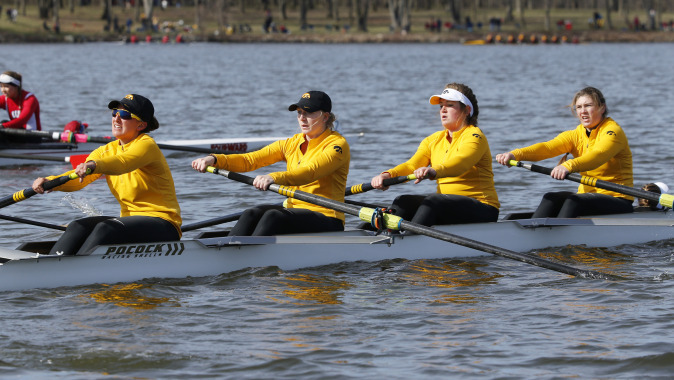 IOWA CITY, Iowa — The University of Iowa rowing team has made great strides in three seasons under Andrew Carter, the program’s third head coach. The Hawkeyes are striving to take the next leap forward with an NCAA Championship appearance in 2016.

Twenty-two of the 88 Division I rowing programs in the country compete at the NCAA Championships each year. Eleven receive automatic bids by winning their respective conference crowns, while the remaining 11 earn at-large bids based on their body of work throughout the season.

The Hawkeyes, who have been ranked as high as 16th this season, are currently slotted at No. 19. It is the program’s first national ranking in six seasons. The team has shown it is capable of toeing the line against the country’s elite programs, challenging itself week-in and week-out against No. 1 California, No. 2 Brown, No. 5 Stanford, No. 11 Wisconsin, No. 15 Gonzaga, and No. 17 Notre Dame, in addition to Louisville and Minnesota, teams receiving votes in the national poll.

“I front-end loaded the season with top end competition,” Carter said. “It has shown the team they’re capable of racing with the best. When you row within 3 1/2 seconds of the No. 1 ranked team in the country that says you can race with some elite crews. They are realizing what they can do, they seem excited, and they are coming to terms with how fast they are.”

Being included in the NCAA Championships would be a big accomplishment for Iowa, a program that has made one appearance in its history in 2001.

“At No. 19 I would say we are just outside of the bubble,” Carter said. “Prior to this week at No. 16, we were right on the bubble or just inside of it.

“It’s tough because I think our crews in the NCAA events raced well against fast competition. Competition that two years ago, we didn’t have a hope against. Despite being close to those crews, we were on the wrong end of the result and it hurt us.”

The Hawkeyes race against unranked crews for the remainder of the regular season, which means Iowa must record victories by large margins to strengthen its case for an at-large bid.

Iowa must also crack the top four in team standings at the Big Ten Championships. It is a strong field, which saw four teams qualify for the 2015 NCAA Championships and boasts three-time defending national champion Ohio State.

“All we have at our disposal now is to ensure that we win in each of the match races we have by the largest margins we possibly can against anyone we face,” Carter said. “The top four teams in the Big Ten right now are predictable, and we have to beat one of them in the top three boat classes.

“We’ve shown the ability to compete with some of them this season. I think we’ve been able to out-pace them in terms of our improvement, and we can give them a run.”