IOWA CITY, Iowa — When you dominate the way University of Iowa wrestler Spencer Lee does, it’s easy to remember the match that got away.

It was another season of demolition for the Hawkeye 125-pounder, who outscored opponents 141-15. For Lee, the match that got away wasn’t even a loss. It was the only bout of his 12 that didn’t end as a bonus-point victory.

Lee won his third consecutive NCAA title March 20 in St. Louis with a 7-0 victory over Brandon Courtney of Arizona State. Iowa head coach Tom Brands knows it could have been a major decision.

“You talk to your athletes about going out and earning awards and championships, sometimes these things are out of your hands a little bit, but this one was firmly in his grasp,” Brands said. “I mean, 7-0 in the finals. He could have cut him and got a major and he would have had 100 bonus point percentage, but he kept him down to keep the zero on the scoreboard.”

Lee finished the season 12-0, extending his winning streak to 35 matches. On March 29, for a second straight season, he was awarded the Dan Hodge Trophy, presented annually to the nation’s best wrestler. Lee shared the honor with Minnesota heavyweight Gable Steveson. Steveson was 17-0 with 14 bonus-point victories.

“It is an honor to win this award and to win a second time. I’m pleased, happy and honored to have won it with someone like Gable Steveson,” Lee said.

Lee is the fifth person to win the Hodge Trophy multiple times. The others are Zain Retherford of Penn State (2017-18), Ben Askren of Missouri (2006-07), David Taylor of Penn State (2012, 2014) and Cael Sanderson of Iowa State (2000-02). Two other Hawkeyes have won the Hodge Trophy — Mark Ironside in 1998 and Brent Metcalf in 2008. This is the second time there have been two winners in the same season. Sanderson and Nick Ackerman of Simpson College shared the honor in 2001. 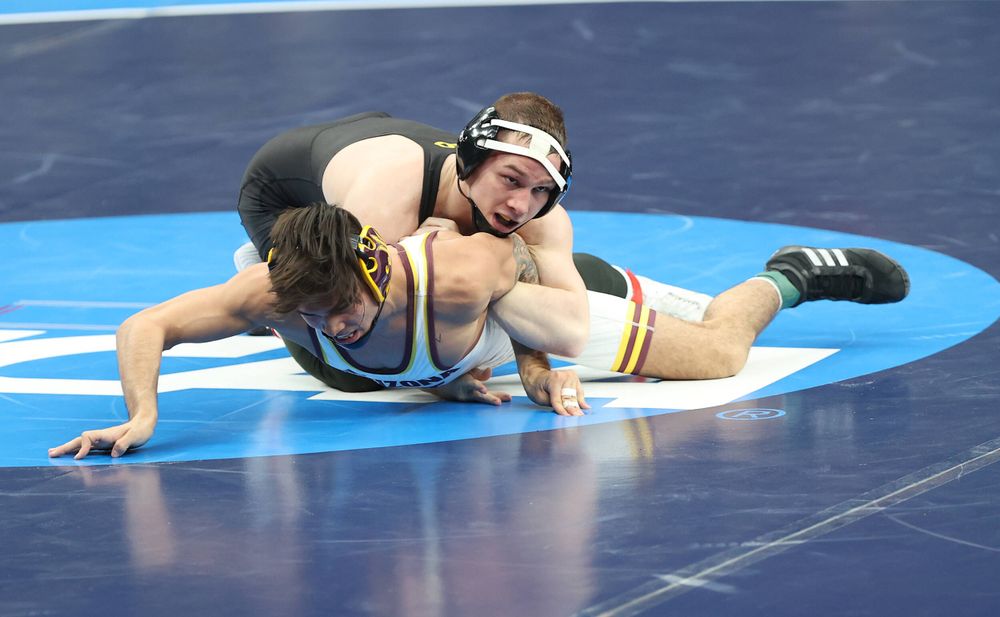 “The focus shouldn’t be about the Hodge, it should be about what’s next, scoring points and continuing to score points for seven minutes or more if needed. If you do that and you do your job right, then the Hodge Trophy will come. That’s what we preach and that’s what we believe at the University of Iowa.”

“The focus shouldn’t be about the Hodge, it should be about what’s next, scoring points and continuing to score points for seven minutes or more if needed,” Lee said. “If you do that and you do your job right, then the Hodge Trophy will come. That’s what we preach and that’s what we believe at the University of Iowa.”

Lee, a senior from Murrysville, Pennsylvania, owns a career record of 75-5 with 62 bonus-point victories — 26 by fall, 26 by technical fall and 10 by major decision.

“He is making history for himself,” Brands said. “All of the sudden he wins two (Hodge Trophies) in a row. He is surpassing what many had as expectations. What is inside him and his mind and the things that make him who he is as a competitor and person, how he carries himself as a gentleman off the mat…if he’s not doing those things he is not a two-time winner. That’s important to him to represent, to put these accolades on his mantle.”