Hawkeyes Set to Host No. 6 Virginia 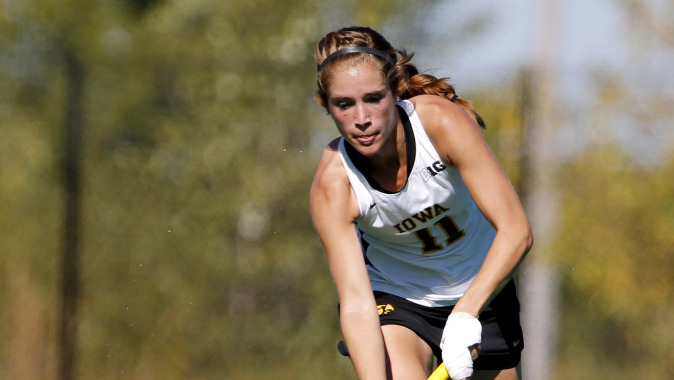 Hawkeyes Set to Host No. 6 Virginia
Iowa will host its season opener Thursday at Grant Field in Iowa City, Iowa, at 3 p.m.

This Week
The 20th-ranked University of Iowa field hockey team (1-1) hosts No. 6 Virginia (1-1) in its home opener at Grant Field in Iowa City, Iowa, Thursday at 3 p.m.

Promotions
The Hawkeyes will host the Hawks Nest Tailgate Thursday prior to the start of the game. Students at the tailgate will have the opportunity to enter a drawing for a “Pill Speaker” by Dr. Dre beats. The first 150 fans will receive a cup with the 2014 field hockey schedule on it.

Scouting No. 6 Virginia
After a 9-0 opening-day victory at William & Mary in which six different Cavaliers scored goals, Virginia was shut out at No. 8 Penn State on Sunday, 3-0. The Nittany Lions and Cavaliers each took 11 shots in the game with sophomore midfielder Lucy Hyams (Whitstable, England) taking seven for Virginia.

We meet again
The Hawkeyes are 2-3 all-time against Virginia. Iowa lost its last meeting with the Cavaliers, 3-2, on Nov. 10, 2012 in the NCAA tournament in Charlottesville, Va. Iowa is 1-0 against Virginia at home.

In the Rankings
The University of Iowa field hockey team is ranked 20th in the country in the 2014 Penn Monto/National Field Hockey Coaches Association (NFHCA) Division I Preseason Poll. The Hawkeyes garnered 173 points in the rankings, and one first place vote. Iowa has been ranked each week (33 weeks) in the poll dating back to Sept. 6, 2011. Iowa is one of six Big Ten Conference schools in the team rankings along with Maryland (first), Penn State (eighth), Northwestern (14th), Michigan State (16th), and Michigan (17th).

Quick Cap-No. 11 Wake Forest
The Hawkeyes took an early 3-0 lead in the first half, benefitting from goals by Stephanie Norlander (3:09), Sarah Watro (15:21), and Natalie Cafone (26:03). Norlander lifted the Hawkeyes to a three-goal advantage in the second half, 4-1, with her second score in the game (45:46). Goalkeeper Alexandra Pecora finished the game with four saves as the Hawkeyes picked up their first win of the season, defeating the Demon Deacons 4-1 on Saturday.

Quick Cap-No. 2 North Carolina
The Tar Heels took an early 1-0 lead in the first minute of the game coming off the stick of Loren Shealy. The home team’s momentum continued as the Tar Heels climbed to a 4-0 advantage going into the half. Iowa made a late push at the 61-minute mark with a goal from junior Natalie Cafone to narrow the gap, 4-1, but were unable to complete the comeback.

Iowa at Grant Field
The Hawkeyes own an overall home record of 139-46, a conference record of 60-25 at home, and an 11-2 record in NCAA Tournament games played in Iowa City.

CAFONE STEPS UP
Junior Natalie Cafone was named the University of Iowa’s 2014 Female Athlete of the Year. The Fairfield, N.J., native was the NCAA statistical champion for points per game in 2013, leading the nation in points per game (2.48) the first Hawkeye to lead nation in points per game since Kristy Gleason in 1992 (3.95). Cafone was named to the NFHCA Division I All-America second team, NFHCA West Region All-America first team, All-Big Ten first team and the All-Big Ten tournament team. The Fairfield, New Jersey, native has scored in 4 consecutive games dating back to the second round of the 2013 Big Ten Tournament last season. Cafone has scored 24 goals over her last 23 games.

Iowa Newcomers
The Black and Gold feature 10 freshman on the 2014 roster. Taylor Omweg and Veronique Declercq will both see action in the backfield. Torie Berkel, JoElla Guagliardo and Mallory Lefkowitz will contribute to the Hawkeye forward line. Pommeline Kortanje, Emily George, Mackenzie Sapp and Melissa Progar will each add to the midfielder’s depth. Freshman goal keeper Katie Jones rounds out the Hawkeye newcomers.

Looking Ahead
The Hawkeyes hit the road for a four-game stretch from Sept. 11, through Sept. 21. Iowa will take on UC Davis, Stanford, Pacific, and will conclude the trip opening Big Ten play in Piscataway, N.J., taking on Rutgers.

Hawkeyes on BTN
The Big Ten Network will be airing at least one Hawkeye contest this season. Iowa will appear on BTN Sept. 26, hosting Indiana at 2:30 p.m. (CT) at Grant Field in Iowa City, Iowa.

4 Earn All-B1G Honors in 2013
Junior Natalie Cafone and Senior Dani Hemeon were named to the first team. 2013 senior Karli Johansen was selected to the second team, and Stephanie Norlander was tabbed as the Big Ten Freshman of the Year, becoming the first Hawkeye to earn the award since Meghan Beamesderfer in 2006. She becomes the fourth Hawkeye to win the award, joining Beamesderfer, Caitlin McCurdy (2005), and Tiffany Leister (1999). Hemeon was also named Iowa’s sportsmanship award honoree.