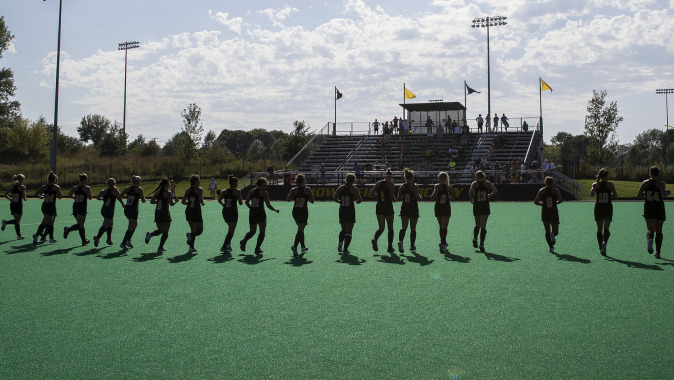 Promotions Friday’s contest against Indiana will be “Social Media Night” where fans are encouraged to tweet using the hashtag #INDvsIOWA for a chance at a $10 food voucher to the concession stand — where it’s “Dollar Dog Night”. Free t-shirts will be given away to the first 50 fans. Sunday’s contest is “Junior Hawk Club Day” where the first 100 fans will receive a free scarf. Autographs will be available after the game.

Scouting No. 17 Indiana Head coach Amy Robertson enters her 14th season at the helm of the program. The Hoosiers are off to a 7-0 start and one of three undefeated teams in the country along with Harvard and St. Francis. Saudra Heilman leads the program offensively with nine goals, four assists, and 22 points. The Hoosiers last outing resulted in a 1-0 road victory over Ohio University in Athens, Ohio.

We Meet Again Iowa has familiarity with both opponents this week after posting wins over both teams a season ago. Iowa defeated scored a 7-1 victory over Missouri State on Oct. 7th, and defeated Indiana, 5-1, on Oct.11th.

All-Time Series The Hawkeyes hold the edge in the all-time series’ against both teams this week. Iowa posts a 17-6 all-time mark against Indiana, and a 25-4-1 record against Missouri State.

In the Rankings The University of Iowa ranks eighth in the 2014 Penn Monto/National Field Hockey Coaches Association (NFHCA) Division I Poll. The Hawkeyes garnered 573 points in the rankings. Iowa has been ranked each week (37 weeks) in the poll dating back to Sept. 6, 2011. Iowa is one of seven Big Ten Conference schools in the rankings along with Maryland (fourth), Penn State (seventh), Northwestern (13th), Michigan (14th), Indiana (17th), and Michigan State (18th).

Iowa Sits No. 4 in RPI Rankings The Rating Percentage Index, commonly known as the RPI, is a quantity used to rank sports teams based upon a team’s wins and losses and its strength of schedule. Released Sept. 23, the Hawkeyes landed the No. 4 national ranking — the highest ranking in the Big Ten conference.

Looking Ahead The Hawkeyes continue part of their six-game homestand next week with games against Ball State (Oct. 3rd), and Northwestern (Oct. 5th).

Quick Cap-Rutgers The ninth-ranked University of Iowa field hockey team (5-2, 1-0) defeated Rutgers on the road Sept. 21, 3-0, in Piscataway, New Jersey. Junior Natalie Cafone got off to a fast start netting the opening goal just under the four-minute mark to give Iowa a 1-0 lead. In the second period, Iowa struck first in the 49th minute benefitting from Cafone’s second goal of the match to stretch the lead to 2-0. Sophomore Jessey Silfer registered the assist. Sara Watro tallied a goal of her own just two minutes later to extend the Hawkeye lead, 3-0. The score marked Watro’s second on the season. The Hawkeye defense held strong in the remaining minutes to secure the victory and push Iowa’s record to 5-2.

Iowa at Grant Field The Hawkeyes own an overall home record of 140-46, a conference record of 60-25 at home, and an 11-2 record in NCAA Tournament games played in Iowa City.

All-Americans Natalie Cafone and Dani Hemeon were named 2013 Longstreth/NFHCA Division I All-Americans. Cafone was named to the second team, while Hemeon garnered third team honors. Cafone and Hemeon are the 84th and 85th national All-Americans in program history. Only four programs nationally have had more.

Cafone Steps Up Junior Natalie Cafone was named the University of Iowa’s 2014 Female Athlete of the Year. The Fairfield, N.J., native was the NCAA statistical champion for points per game in 2013, leading the nation in points per game (2.48) the first Hawkeye to lead nation in points per game since Kristy Gleason in 1992 (3.95). Cafone was named to the NFHCA Division I All-America second team, NFHCA West Region All-America first team, All-Big Ten first team and the All-Big Ten tournament team. Cafone has scored 33 goals over her last 28 games.

Iowa Newcomers The Black and Gold feature 10 freshman on the 2014 roster. Taylor Omweg and Veronique Declercq will both see action in the backfield. Torie Berkel, JoElla Guagliardo and Mallory Lefkowitz will contribute to the Hawkeye forward line. Pommeline Kortanje, Emily George, Mackenzie Sapp and Melissa Progar will each add to the midfielder’s depth. Freshman goal keeper Katie Jones rounds out the Hawkeye newcomers.

National Academic Honors The University of Iowa field hockey team was awarded the 2013 Gladiator SGI/NFHCA Division I National Academic Team Award. The National Academic Team Award recognizes those institutions that have achieved a team GPA of 3.0 or higher during the first semester of the 2013-14 academic year. Brynn Gitt and Jessy Silfer were named 2013 Gladiator SGI/NFHCA Division I Scholars of Distinction. The honor is awarded to student-athletes who achieved a cumulative GPA of 3.90 or higher through the first semester of the 2013-14 academic year.