Hawkeyes and No. 12 Wisconsin Battle to Scoreless Draw 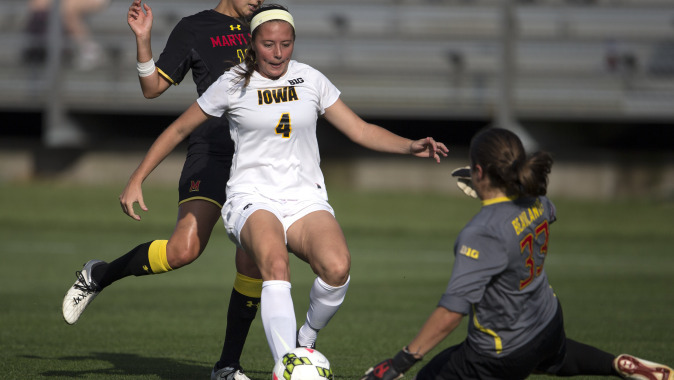 MADISON, Wisc. — In its third road game in eight days, the University of Iowa women’s soccer team battled through two overtime periods in a scoreless draw against the 12th?-ranked Wisconsin Badgers Wednesday night at Wisconsin’s McClimon Soccer Complex. With the season winding down, the tie gives Iowa a crucial point in the Big Ten standings.

“Tonight, I believe our team grew up a little and became better,” said UI head coach Dave DiIanni. “This game was the third road game in eight days for us, and so mentally and physically I wasn’t sure what they had left.”

It was nearly even all across the board in the opening half of play between the Hawkeyes and Badgers as both teams fired off six shots apiece within the first 45 minutes of action. Wisconsin had a chance to go up 1-0 on the Hawkeyes in the early going when Molly Laufenberg fired a shot toward UI junior goalkeeper Hannah Clark, but the shot deflected off the crossbar keeping the score tied at zero.

The second half was a different story as Iowa only managed two shots opposed to Wisconsin’s seven. Sophomore Brooke Backes sent a shot toward the Wisconsin goal in the 49th minute, but it was blocked by the Badger defense. Iowa didn’t see any other offensive action until there was less than three minutes left in regulation. Sophomore Natalie Krygier’s shot sailed wide, sending the game into overtime.

Wisconsin came out firing in the first overtime, sending off three shots within the first three minutes, but none of them connected with the net. Iowa earned a corner kick and a chance to win the game in the 95th minute, but Krygier’s header off of sophomore Bri Toelle’s cross went wide.

It was all Wisconsin in the second overtime, firing off two shots while holding Iowa to zero. With less than a minute left in the game, Clark came up big for Iowa, making a save on a shot from Wisconsin’s leading scorer Cara Wells, preserving the double overtime draw.

Two of the conferences best goalkeepers were on display on Wednesday night. Wisconsin’s Genevieve Richard added to her Big Ten-best seven shutouts after holding the Hawkeyes scoreless for 110 minutes. Iowa’s Clark added to her impressive resume as well, tallying six saves on the night on her way to her sixth shutout of the year and 17th of her career. Tonight’s shutout marks only the second time the Badger’s haven’t scored in a game this season.

“Wisconsin is an extremely talented team that can expose you badly if you don’t have a collaborative effort for 90 minutes or more,” said DiIanni. “We hope this game is the springboard to more rather than the highlight of our season.”

The Hawkeyes are off until Oct. 17 when they host Indiana at the UI Soccer Complex at 7 p.m. (CT). The match, which will be streamed live on BTN Plus, will serve as Iowa’s Senior Night.