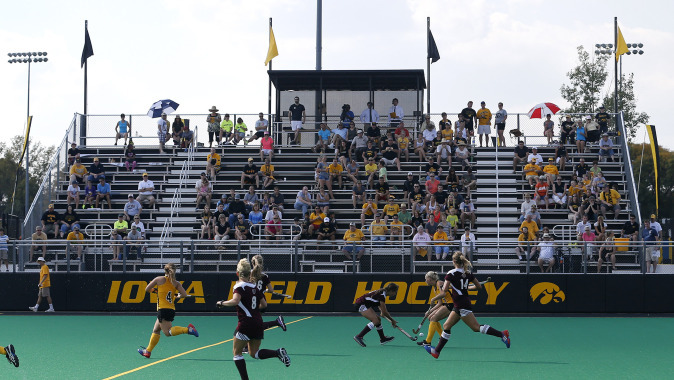 Scouting #14 Michigan
Michigan is led by former Hawkeye standout, Marcia Pankratz, who is in her 15th season as head coach of the Wolverines (8-4, 3-1 Big Ten). Leslie Smith paces the Maize and Blue offense with 19 points on eight goals and three assists. Defensively Sam Swenson has appeared in all 12 games while drawing nine starts at goalkeeper. Swenson (8-3) leads the team with 34 saves. Michigan has one win over a ranked opponent (No. 6 Penn State, Sept. 19).

Scouting Miami (Ohio)
Having led Miami to two consecutive Mid-American Conference Championships, head coach Iñako Puzo returns for his fourth year in charge of the RedHawks (4-8, 2-0 MAC). Last season, Miami won the MAC Tournament earning the program’s first bid to the NCAA tournament. The Redhawks traveled to Michigan State for the play-in round, where they fell, 3-0. Valentia Neira paces the Redhawks offense with 18 points on eight goals and two assists.

We Meet Again
Iowa has familiarity with both opponents this week having played each on the road a season ago. Iowa fell to Michigan, 3-2, on Oct. 5 in the regular season, and bounced back in the Big Ten Tournament, earning a 1-0 victory over Michigan in the first round of the Big Ten Tournament. Iowa downed Miami (Ohio) last season, 3-1.

All-Time Series
The Hawkeyes hold the edge in the all-time series against both teams this week. Iowa posts a 40-20 all-time mark against Michigan, and a 9-1 all-time record against Miami (Ohio).

In The Rankings
The University of Iowa ranks 10th in the 2014 Penn Monto/National Field Hockey Coaches Association (NFHCA) Division I Poll. The Hawkeyes garnered 461 points in the rankings. Iowa has been ranked each week (39 weeks) in the poll dating back to Sept. 6, 2011. Iowa is one of seven Big Ten Conference schools in the rankings along with Maryland (second), Penn State (fourth), Northwestern (eighth), Michigan (14th), Indiana (18th), and Michigan State (20th).

Iowa Sits No. 12 in RPI Rankings
The Rating Percentage Index, commonly known as the RPI, is a quantity used to rank teams based upon a team’s wins and losses and its strength of schedule. Released Oct. 7th, the Hawkeyes landed the No. 12 national ranking.

Hat Tricks
Three Hawkeyes — Natalie Cafone, Dani Hemeon and Stephanie Norlander — have scored hat tricks in the 2014 season. Junior Natalie Cafone’s came against No. 6 Virginia on Sept. 4, in a 4-3 win at home. Sophomore Stephanie Norlander registered her first one in the opening 12 minutes in the win over Missouri State on Sept. 28 in Iowa City. Norlander and Hemeon both achieved the scoring accomplishment on Oct. 3rd against Ball State. The last time two Hawkeyes scored a hat trick in the same game came against Saint Louis on Sept. 19, 2009 when Jess Werley and Dean Tricia each scored a trio of goals in Iowa’s 12-0 win over the Billikens.

Iowa at Grant Field
The Hawkeyes own an overall home record of 143-47, a conference record of 61-26 at home, and an 11-2 record in NCAA Tournament games played in Iowa City.

Cafone Steps Up
Junior Natalie Cafone was named the University of Iowa’s 2014 Female Athlete of the Year. The Fairfield, N.J., native was the NCAA statistical champion for points per game in 2013, leading the nation in points per game (2.48) the first Hawkeye to lead nation in points per game since Kristy Gleason in 1992 (3.95). Cafone was named to the NFHCA Division I All-America second team, NFHCA West Region All-America first team, All-Big Ten first team and the All-Big Ten tournament team. Cafone has scored 37 goals over her last 32 games.