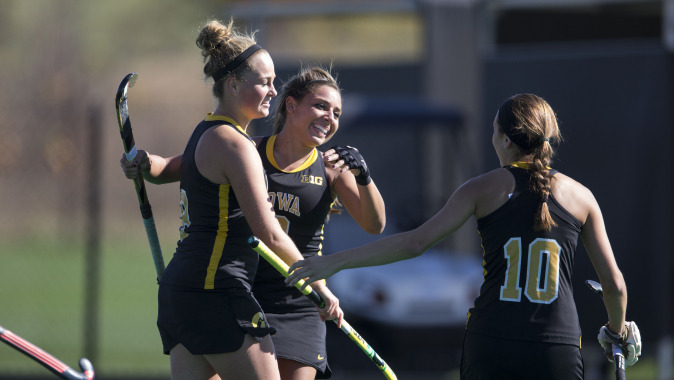 Scouting Maryland
The Terrapins are led by Missy Mehberg who is in her 27th season at the helm of the Maryland program. Mehberg has the Terrapins off to a 15-2 start with a 6-1 mark in Big Ten play. Junior Anna Dessoye paces the Maryland offense with 36 points on 10 goals and 16 assists. Defensively, senior Brooke Cabrera (15-2) has started all 17 games as goalkeeper. Cabrera has collected 42 saves and surrendered 17 goals.

We Meet Again
The Hawkeyes have history with the Terrapins. The two teams last met in the 2011 NCAA Tournament. Iowa fell short in the contest, 4-2, in College Park, Maryland.

In the Rankings
The University of Iowa ranks tied for 14th with Michigan in the 2014 Penn Monto/National Field Hockey Coaches Association (NFHCA) Division I Poll. The Hawkeyes garnered 331 points in the rankings. Iowa has been ranked each week (42 weeks) in the poll dating back to Sept. 6, 2011. Iowa is one of six Big Ten Conference schools in the rankings along with Maryland (No. 2), Penn State (No. 5), Northwestern (No. 8), Michigan (T-No. 14), and Michigan State (No. 19).

Iowa Sits No. 17 in R Rankings
The Rating Percentage Index, commonly known as the RPI, is a quantity used to rank teams based upon a team’s wins and losses and its strength of schedule. Released Oct. 28th, the Hawkeyes landed a No. 17 national ranking.

Quick Cap: #4 Penn State
Iowa earned a 4-0 win over No. 4 Penn State on Oct. 25 at Grant Field. The Hawkeyes (11-5, 4-3) benefited from a 3-0 lead going into the half and finished strong to hold off the Nittany Lions (13-4, 4-3). The Hawkeye offense erupted in the first period benefiting from goals by Chandler Ackers (15:11), Natalie Cafone (22:22), and Stephanie Norlander (25.39). A balanced defense paired with a shutdown performance from Alexandra Pecora kept the Nittany Lions off the board throughout the game. Pecora (10-5) recorded four saves in the shutout effort. Senior Dani Hemeon recorded her final regular season goal on Grant Field in the 47th minute to make the final score, 4-0.

Hemeon Named to NFHCA All-Star Game
Senior Dani Hemeon was selected to compete in the 2014 National Field Hockey Coaches Association Division I Senior Game, the NFHCA announced Wednesday. Karli Johansen played in the even last year, while, Jessica Barnett and Kathleen McGraw were selected in 2012. Hemeon has appeared in all 78 games of her career with 59 starts.

Cafone Named B1G PLAYER of the Week
Junior Natalie Cafone was named Big Ten Offensive Player of the Week on Sept. 9. Cafone paced Iowa’s offensive attack with three goals on five shots in a 4-3 win over No. 6 Virginia in Iowa’s home opener on Sept. 4. This marked Cafone’s second Big Ten Player of the Week honor (Sept. 24, 2013).

Norlander Named B1G Player of the Week
Sophomore Stephanie Norlander was named Big Ten Offensive Player of the Week on Sept. 30. Norlander paced Iowa’s offensive attack with a combined five goals on 12 shots over two games, which included a hat trick in the opening 12 minutes against Missouri State.

Cafone Steps Up
Junior Natalie Cafone was named the University of Iowa’s 2014 Female Athlete of the Year. The Fairfield, N.J., native was the NCAA statistical champion for points per game in 2013, leading the nation in points per game (2.48) the first Hawkeye to lead nation in points per game since Kristy Gleason in 1992 (3.95). Cafone was named to the NFHCA Division I All-America second team, NFHCA West Region All-America first team, All-Big Ten first team and the All-Big Ten tournament team. Cafone has scored 40 goals over her last 37 games.

Iowa at Grant Field
The Hawkeyes own an overall home record of 145-48, a conference record of 62-27 at home, and an 11-2 record in NCAA Tournament games played in Iowa City.