No. 6 Iowa Travels to No. 9 Minnesota 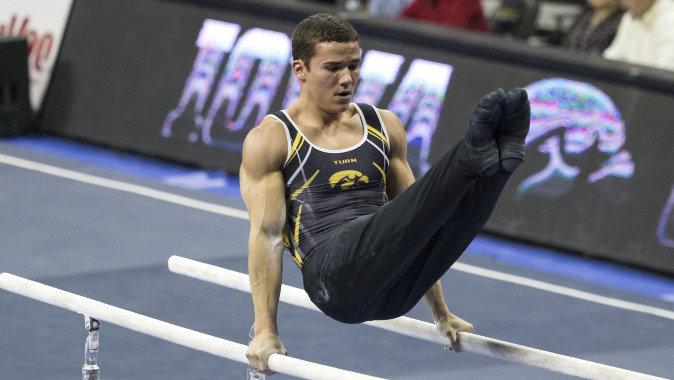 THIS WEEK:
The No. 6-ranked University of Iowa men’s gymnastics team will go head-to-head with No. 9 Minnesota for the second time this season in Minneapolis, Minnesota, on March 7. The meet begins at 7 p.m. (CT).

FOLLOW ALONG:
Fans can watch live on BTN Plus, available at btn2go.com. A link to the live stream is also available on the team’s schedule page at hawkeyesports.com.

LAST TIME OUT:
The Hawkeyes traveled east to take on the No. 2-ranked Penn State Nittany Lions last weekend. Despite setting a new season high team score, Iowa lost Penn State 440.800 to 435.750. Junior Matt Loochtan (14.950) placed first on vault, junior Jack Boyle set a season high on high bar, taking the event title with a 14.900, and redshirt junior Cyrus Dobre-Mofid (15.250) set a career high on parallel bars on his way to a third event title for the Hawkeyes. Loochtan (15.350) set a season high on floor exercise while Boyle (15.000) and redshirt senior Lance Alberhasky (14.750) also set a career highs on the event.

NATIONALLY RANKED:
The Hawkeyes are ranked in the top 10 nationally according to the most recent national ranking list on roadtonationals.com (March 2). The rankings are based on an average of the team’s top three scores. Oklahoma remains in the top spot over Penn State. Stanford moved up a spot to third followed by Illinois and Michigan. Iowa and California are sixth and seventh, respectively. Ohio State switched places with Minnesota at eighth and ninth, and Air Force sits at 10th.

SULLIVAN STREAKING:
Junior Doug Sullivan is sixth in the country on pommel horse. In the last five meets, the pommel specialist has averaged a 14.900 on the event, clinching event titles against UIC (14.950) and Illinois (14.850). The Aurora, Illinois, native is Iowa’s pommel horse record holder with a score of 15.250.

SOARING HAWKS:
Two Iowa gymnasts are ranked in the top 10 in the country according to roadtonationals.com. Junior Jack Boyle is ninth on rings with a top three score average of 15.300. Junior Doug Sullivan sits sixth in the country on pommel horse. Sullivan’s three score average is 15.033 with a high score of 15.150 from the Feb. 14 meet against Minnesota and Nebraska in Iowa City.

LOOCHTAN, BOYLE COMPETE AT WINTER CUP:
The University of Iowa men’s gymnastics team sent juniors Jack Boyle and Matt Loochtan to represent the Hawkeyes at the Winter Cup Challenge in Las Vegas, Nevada, on Feb. 20-22. Boyle finished 33rd with an overall score of 79.250, but failed to qualify for finals. Loochtan qualified for finals following a 15.010 on vault, finishing fourth overall. In finals, he scored a 14.900 clinching fourth overall on vault with a combined score of 30.010. Loochtan’s other events included a 14.600 on floor, claiming eighth place, 13.650 on rings, and 13.250 on parallel bars.

SIX HAWKEYES EARN PCA HONORS:
Six gymnasts were honored by the PCA (Presidential Committee for Academic Awards) earlier this past year. Cyrus Dobre-Mofid, Andrew Botto, Zach Wendland, Cory Paterson, and Caleb Fischle-Faulk were honored during the Iowa vs. Maryland men’s basketball game on Feb. 8. Each year the PCA honors student-athletes who have achieved a 3.0 GPA and are letterwinners. The PCA is responsible for advising the UI President and director of athletics Gary Barta on policies for the University’s intercollegiate athletics programs, and recognizes student-athletes for their accomplishments in and out of the classroom.

UP NEXT:
The Hawkeyes end the regular season with a trip to Lincoln, Nebraska, for a dual meet against the Cornhuskers on March 15. The competition begins at 1 p.m. (CT).