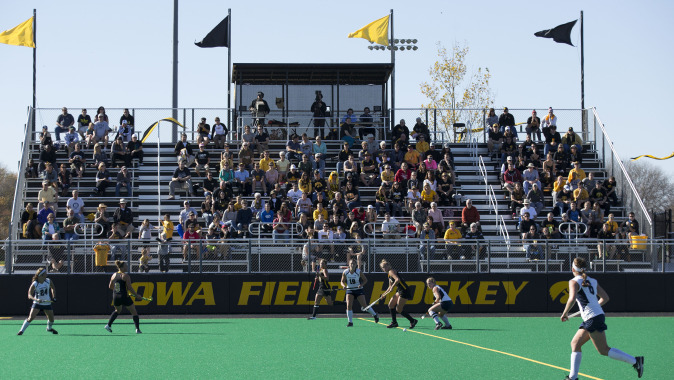 IOWA CITY, Iowa — We’ve all heard the expression, “In order to be the best, you have to beat the best.” For the University of Iowa field hockey team, it’s not just an expression, it’s how the team has booked the country’s toughest collegiate field hockey schedules year-in and year-out over the last 15 years. The 2015 slate will be no different.

“As always, we will play a very tough schedule,” said UI head coach Lisa Cellucci. “For the last 15 years, our philosophy has always been `in order to be the best, we need to play the best.’

“We will open up with the Big Ten vs. ACC / Challenge and play the 2014 ACC Champion and Elite 8 qualifier Wake Forest, as well as a Final Four participant in North Carolina. The Big Ten and ACC are the two best conferences in the country and we fully expect to have five to six Big Ten teams ranked in the country’s top-15. Every weekend will be challenging and we wouldn’t want it any other way.”

With three returning seniors and four juniors, the 2015 field hockey team will feature a mix of experienced leaders in addition to a talented group of underclassmen. Following a three-week spring schedule that featured competition against the country’s top programs in Louisville, Michigan, and Northwestern, Cellucci is excited about the possibilities of this group.

“We had a productive spring season,” said Cellucci. “Everyone played a lot of minutes and gained valuable experience for the upcoming fall season. Heading into the summer the team will continue to focus on improving their skill execution, their tactical understanding, and fitness. They’ll combine these assets so we’re ready to play an exciting brand of hockey in the fall.

As the team transitions into summer break, Cellucci has the focus on two things; finals week and individual training.

“The team is currently preparing for finals so the focus has definitely shifted to their academics,” said Cellucci. “We have several players competing in the USA Junior High Performance program where they’ll have the opportunity to gain valuable playing experience to kick off their summer.

“Natalie Cafone will train with the USA Senior National Team, which will be an outstanding opportunity for her. Stephanie Norlander heads to Spain in early June to compete with the Canadian National Team in the Olympic-qualifying World League 3 tournament.

“Stephanie will also have the opportunity in July to compete at the Pan American Games in Toronto, Canada, to again help Canada qualify for the 2016 Olympic Games. Her summer of hockey will be outstanding while putting her in position to have a fantastic junior year.”

The Hawkeyes will regroup as a team August 12, for preseason camp and the official start of the 2015 campaign. Cellucci and company will have 2 1/2 weeks to prepare the Black and Gold for the season-opening weekend at the ACC / Big Ten challenge in Chapel Hill, North Carolina, from August 22-23.

“We’re excited for the upcoming season,” said Cellucci. “Fans should expect a prepared and focused team that is ready to attack each and every day whether we’re training or competing on gameday.”