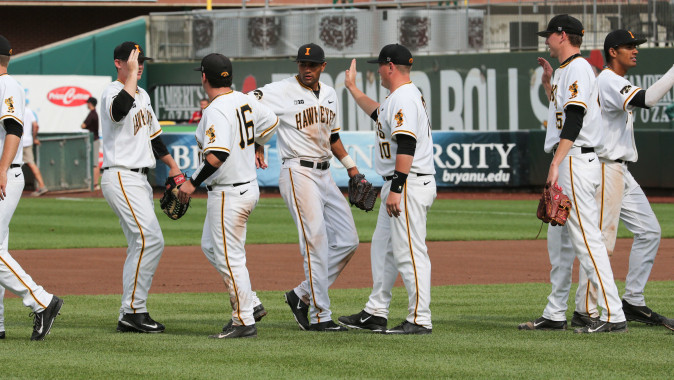 40 WINS
Iowa’s 3-1 victory over Oregon moved the Hawkeyes to 40-16 overall this season. The 40 victories are the most for the program since 1985, tied for the second-most wins in a single season, and is just the fourth 40-win season in school history.

ENDING A DROUGHT
Iowa won its first NCAA Tournament game since 1972 with Friday’s 3-1 victory over Oregon. The last time the Hawkeyes won an NCAA Tournament game…
? Richard Nixon was President.
? A gallon of gas was 36 cents.
? A gallon of milk was $1.20.
? The Godfather was the top movie in the box office.
? American Pie was one of the hit songs.
? UI head coach Rick Heller was 9 years old.

2-WAY TYLER
Tyler Peyton showed why he is one of 10 players remaining for the John Olerud Two-Way Player of the Year Award in Iowa’s 3-1 win over Oregon. The right-hander went 7 1/3 innings, allowing one run on seven hits, while fanning five. He also went 1-for-2 with a run scored and two walks at the plate.

PLAYER NOTES
? Senior Nick Day finished 2-for-4 with an RBI against the Ducks. It was Day’s eighth multi-hit game this season and second in his last four games. The third baseman has hit safely in three of the last four contests.

? Junior Nick Roscetti drove in two of Iowa’s three runs against Oregon despite not recording a hit in the game. Roscetti now has a team-high eight multi-RBI games this season.

? Junior Tyler Peyton extended his hitting streak to nine games with a third inning single against Oregon. Peyton has reached base safely in 14-straight contests.

? Iowa pitchers Tyler Peyton and Nick Hibbing allowed one run on 10 hits against Oregon. It was the team’s 32nd game this season allowing two earned runs or fewer.

? Senior reliever Nick Hibbing threw 1 2/3 shutout innings to pick up his eighth save of the season. The right-hander extended his streak without walking a batter to 42 innings. He has 36 strikeouts to two walks this season.

? Senior Eric Toole finished 0-for-4 and didn’t reach base. It was just his fifth game this season without reaching safely. Toole is 1-for-16 in postseason play with his only hit being a solo home run on May 21 against Michigan. It was Toole’s first career blast.

MISCELLANEOUS NOTES
? The Hawkeyes are 20-5 when playing error-free baseball and 33-9 when committing one or fewer errors.