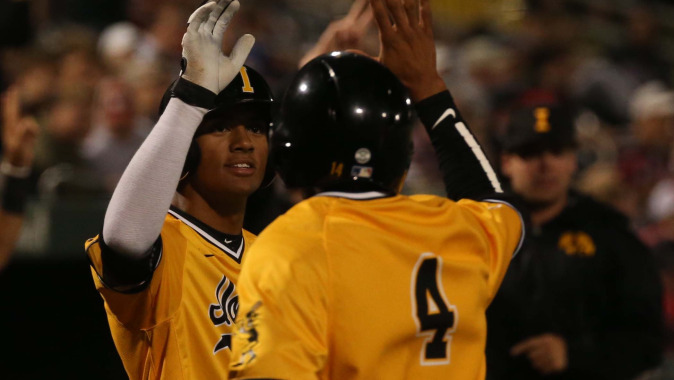 TODAY’S GAME
The University of Iowa baseball team faces Oregon in a Springfield Regional elimination game today at 2 p.m. (CT) at Hammons Field. A win would set up a 7 p.m. matchup against top-seeded Missouri State.

PITCHING MATCHUP
Iowa will start junior RHP Calvin Mathews. The second-team All-Big Ten selection is 5-3 with a 2.67 ERA this season. Mathews has allowed five or fewer hits in 11 of his 14 starts and has allowed one or fewer earned runs in 10 starts.
Oregon will send junior RHP Josh Graham to the mound. Graham is 4-1 with a 2.75 ERA in 18 appearances, including five starts. He has allowed 20 runs (18 earned) on 45 hits over 59 innings with 58 strikeouts against 22 walks.

REMATCH
Iowa and Oregon will square off in a rematch Sunday. The Hawkeyes took the first ever meeting in the series, 3-1, in both teams NCAA openers on Friday.
Junior Tyler Peyton earned the win, allowing one run on seven hits over 7 1/3 innings. He had five strikeouts without walking a batter.
The Hawkeyes had only six hits in the game, but took advantage of six hit by pitches and four walks. Nick Day went 2-for-4 with an RBI, while Nick Roscetti drove in two of Iowa’s three runs.

NCAA TOURNAMENT HISTORY
UI head coach Rick Heller is 2-5 all-time in NCAA Regional play. He won a game as a No. 4 seed at Northern Iowa in 2001 and one as a No. 2 seed this season.

CLEAN BASEBALL
Iowa entered the NCAA Tournament as a one of the top defensive teams in the nation, and the Hawkeyes haven’t disappointed. Iowa has played error free baseball in two NCAA Regional games.

40 WINS
Iowa reached the 40-win plateau for just the fourth time in school history in its 3-1 victory over Oregon on May 29. The 40 victories are the most for the program since 1985 and are tied for the second-most wins in a single season.

ENDING A DROUGHT
Iowa won its first NCAA Tournament game since 1972 with Friday’s 3-1 victory over Oregon. The last time the Hawkeyes won an NCAA Tournament game…
Richard Nixon was President.
A gallon of gas was 36 cents.
A gallon of milk was $1.20.
The Godfather was the top movie in the box office.
American Pie was one of the hit songs.
UI head coach Rick Heller was 9 years old.

PLAYER NOTES
Senior Nick Day is leading the team with a .429 (3-for-7) batting average with Iowa’s lone extra base hit in NCAA Regional play. The third-baseman has two of Iowa’s five RBIs.
Seniors Eric Toole and Jake Mangler both tallied two hit games in Saturday’s 5-3 loss to Missouri State — their 21st multi-hit contest of the season.
Mangler extended his reached base streak to 10 games — the longest current streak for a Hawkeye.
Nick Hibbing’s next relief appearance will tie him with Tim Gudex for the most appearances in school history. Hibbing has appeared in 80 career games.
Hibbing has thrown 42 innings without walking a batter (since the Feb. 13 season opener against Kansas State). The right-hander has 36 strikeouts to two walks.

SHULISTA SHINES
Senior Brandon Shulista had the best outing of his career against Missouri State, tossing 4 1/3 shutout innings. The right-hander scattered two hits and had one walk and one strikeout in a career-long outing.