Depth on Defense is a Hawkeye Strength 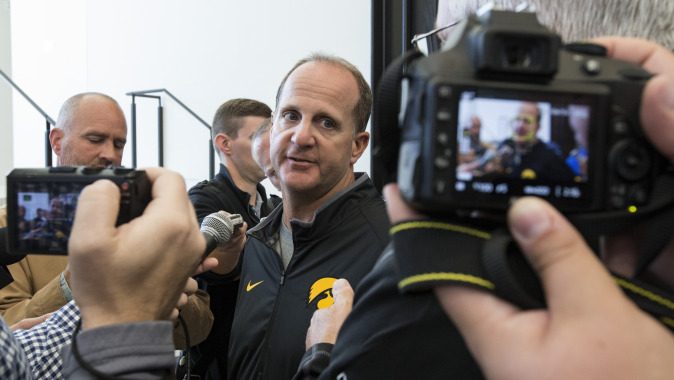 IOWA CITY, Iowa — University of Iowa defensive coordinator Phil Parker shared a positive message with media Monday as the countdown to kickoff against Illinois State has dwindled to 11 days.

“This is probably the best we have been for a while (depth-wise),” Parker said while meeting with reporters in the Stew and LeNore Hansen Football Performance Center. “Everybody has a chance to play and they are showing they can do it on the field.”

Last season the Hawkeyes finished 7-6 overall and their defense was sixth in the Big Ten Conference, allowing 344.2 yards per game. Iowa was second in the league in fewest passing yards (175.9 per game).

Trinca-Pasat and Carl Davis left a 600-pound void in the middle of the defensive line, meaning the time is now for juniors Faith Ekakitie, Jaleel Johnson, and Kyle Terlouw, and sophomore Nathan Bazata.

The Hawkeyes will blend experience and youth at defensive end. Seniors Nate Meier and Drew Ott are backed by redshirt freshmen Parker Hesse and Matt Nelson.

“We lost two good guys inside, but I feel very comfortable with the two-deep on the defensive line,” Parker said.

The linebacker position is deeper and more experienced than in the past. Senior Cole Fisher has moved into the starting Will position, alongside sophomores Josey Jewell (middle) and Ben Niemann (outside).

Iowa looks good at the back of the defense with hard-hitting safeties Miles Taylor and Jordan Lomax at strong and free respectively. Taylor, a sophomore, made eight tackles last season and Lomax, a senior, is the returning UI tackle leader with 92 (to go with six pass breakups). Junior Anthony Gair is second on the depth chart at strong safety and freshman Brandon Snyder is No. 2 at free safety. Cornerbacks with returning game experience include senior Sean Draper, and juniors Desmond King, Maurice Fleming, and Greg Mabin.

“We’re pleased with them and the way they are working,” Parker said.

Speaking specifically about cornerbacks, Parker said: “I don’t think you ever feel good about anything until you start playing the game, but they all have played in games. They all have game experience, so nothing is going to be new for them when they get in there.”

The Hawkeyes began classes yesterday and Parker said the academic calendar and the Sept. 5 season opener come at opportune times.

“This is a good week for our kids to be in school,” Parker said. “They will get used to the practice schedule and next week and we’ll start game-planning for our first opponent.”

Iowa opens against an Illinois State team that won 13 of 15 games last season and played in the FCS Championship. The Redbirds were 17th in total offense in FCS, averaging 463.6 yards per game. They were 10th in rushing offense, averaging 241.3 yards per game.