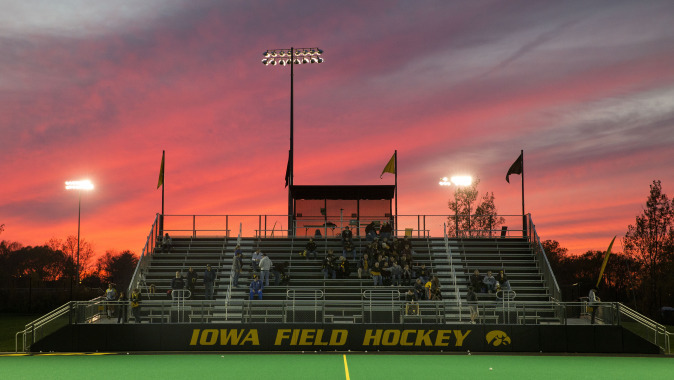 THIS WEEK
The 15th-ranked University of Iowa field hockey team plays host to three matchups this week. Iowa kicks things off against fifth-ranked Stanford in its home opener on Thursday at 4 p.m. (CT). The Hawkeyes return to Grant Field on Saturday for a showdown with Kent State at 11:30 a.m. (CT) before concluding the weekend with a 2:30 p.m. (CT) contest against Saint Louis on Sunday.

LIVE STREAMING
Iowa field hockey fans can follow all home contests via live stats (GameTracker) on hawkeyesports.com. Click on the “GT” link found on the field hockey schedule page to access the live stats feed. Fans can also follow @IowaFieldHockey for live in-game updates. Thursday’s contest against Stanford will be streamed live on BTN Plus. Sunday’s game against Saint Louis will be streamed on Hawkeye All-Access — a subscription based service.

SCOUTING STANFORD
• The Cardinal bring a 3-1 record into Thursday’s match. Stanford topped Indiana,1-0, on Sept. 4 before picking up a 1-0 overtime victory over Miami (Ohio) on Sept. 6.
• Maddie Secco leads the Cardinal in goals (3) and points (7). Secco, Lauren Becker, Fran Tew, Beaudoin, and Millie Stefanowicz each have an assist.
• Stanford averages 1.5 goals per game off 13.2 shots per game.
• The Cardinal checked in at No. 5 in this week’s Penn Monto/NFHCA Poll, released Sept. 8. Stanford was ranked No. 6 in the preseason poll released on Aug. 25.

STANFORD VS. IOWA — THE SERIES
• Iowa is 12-7 all-time against Stanford, including 5-2 when playing in Iowa City.
• In the first ever meeting between the two schools (1983), Iowa won, 2-1.
• The Cardinal defeated the Hawkeyes, 2-1, last season, and have won the last five matchups between the two schools.
• Iowa has not deeated Stanford since 2008, when the Hawkeyes won, 3-2, in Stanford, California.

SCOUTING KENT STATE
• The Golden Flashes enter Saturday’s contest with a 1-2 record after being shutout 6-0 by Old Dominion and falling 5-1 to Michigan State last week.
• Prior to the start of the 2015 season, the Golden Flashes were picked to repeat as Mid-American Conference regular season and Tournament champions.
• Despite losing last year’s top two scorers to graduation, the Golden Flashes bring back a strong contingent to the 2015 campaign. Kent State’s five goals this season have each been scored by five different players.
• Through three games, the Golden Flashes are giving up 4.67 goals per game, and have been outscored by opponents, 14-5.

KENT STATE VS. IOWA — THE SERIES
• Iowa leads the all-time series against James Madison, 6-1, and are a perfect 4-0 when playing in Iowa City.
• The first match ever played between the two schools was in 1997 in Iowa City. The Hawkeyes won, 7-2.
• Iowa has won three in a row against Kent State, with the last victory coming in 2013 when the Hawkeyes blanked the Golden Flashes, 6-0.

SCOUTING SAINT LOUIS
• Standing at 0-5, the Billikens head to Iowa City looking for their first win of the 2015 season.
• Saint Louis has been shutout in every game except for its 7-1 loss at California. Freshman Morgan Crowe has the Billikens’ lone goal of 2015.
• Through five games, Saint Louis is being outshot by opponents, 122-26, while giving up 5.2 goals per game. The opposition is also edging the Billikens in penalty corners, 41-11.

SAINT LOUIS VS. IOWA — THE SERIES
• Iowa leads the all-time series against Saint Louis, 15-5-1. The Hawkeyes are 9-1 at home when playing the Billikens.
• The first match ever played between the two schools was in 1977; Iowa’s first official season. The Billikens won, 3-1.
• Iowa and Saint Louis have not met since 2009, when the Hawkeyes destroyed the Billikens, 12-0, in Iowa City.

LAST TIME OUT
The Hawkeyes closed out a four-game road stretch last weekend with matchups against Richmond and James Madison in Harrisonburg, Virginia.

In Iowa’s Sunday matchup with James Madison, the Hawkeyes fell, 4-1. Iowa’s lone goal came in the second half from freshman Isabella Brown. The goal was the first of Brown’s career.

IN THE RANKINGS
Iowa moved up two spots to No. 15 in the Penn Monto/National Field Hockey Coaches Association (NFHCA) Division I Poll, released on Sept. 8. The Hawkeyes garnered 204 points in the rankings and are one of five ranked Big Ten schools — Maryland (No. 8), Northwestern (No. 9), Penn State (No. 14), and Michigan (No. 16). Iowa has been ranked in the polls each week dating back to Sept. 6, 2011.

TO BE THE BEST YOU HAVE TO PLAY THE BEST
Of Iowa’s 18 opponents in 2015, seven are ranked in the most recent NFHCA Division I Poll released on Sept. 8, including five Big Ten schools — No. 8 Maryland, No. 14 Penn State, No. 9 Northwestern, and No. 16 Michigan.

INSIDE THE BIG TEN RANKINGS
Junior Stephanie Norlander is tied for fourth in the Big Ten in goals (4), tied for fifth in points (7), and tied for eighth in shots (13).

Through four games, the Hawkeyes rank fifth in assists in the Big Ten overall with seven. Sophomore Mallory Lefkowitz is tied for second in the conference with three assists, each coming in Iowa’s 5-1 victory over Richmond on Sept. 4.

GREWE STEPPING UP
Freshman Makenna Grewe ranks second among all freshmen in the Big Ten in goals (three) and points scored (seven), tying her for fourth and fifth in the conference overall.

Grewe got Iowa on the board in 2015, scoring her first career goal against No. 11 Wake Forest in the season opener on Aug. 29.

LOOKING AHEAD
The Hawkeyes remain in Iowa City next week, closing out a five-game homestand. Iowa faces Rutgers in its Big Ten opener on Sept. 18 and follows with a matchup against Missouri State on Sept. 20.