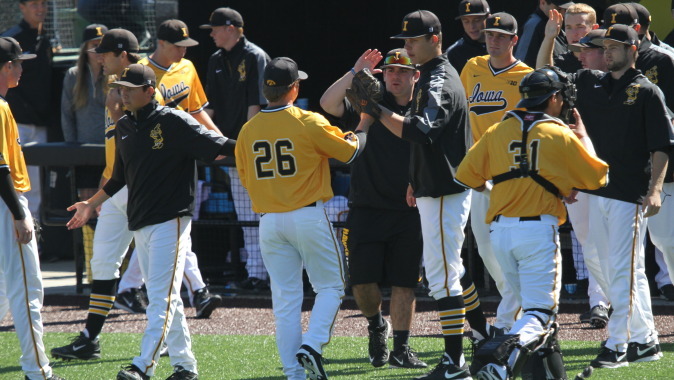 “It was a great day,” said UI head coach Rick Heller. “A lot of the new guys got their feet wet. The pitching was a positive, they threw well. Defensively we were a little sloppy in the first two innings, but we played clean baseball from there.

“Overall it was a positive day.”

Iowa’s hurlers combined for 12 strikeouts and issued just two walks in the contest, and nine Iowa pitchers tossed perfect innings. Freshman Sam Lazzaraga needed just 17 pitches to strike out the side in the 10th, while sophomore Nick Gallagher allowed one of the four hits, but struck out the side in the third.

Offensively, it was a work in progress.

Iowa had 11 hits on the day. Junior transfer Mason McCoy led the team with a three-hit day. He was 3-for-7 with two runs and an RBI, while senior Tyler Peyton (2-for-2, 1 run, 1 RBI) and junior Corbin Woods (2-for-4, RBI, run) had two-hit days. Senior Nick Roscetti had two RBIs, while freshman Zach Daniels was 1-for-1 with a three-run triple.

“Offensively, we didn’t’ swing the bats all that well, but we did enough to score some runs,” said Heller. “McCoy had a good day, he barreled up a lot of balls.”

The Hawkeyes jumped out to a 1-0 lead in the first inning, taking advantage of a Blue Jay error. Peyton drew a two-out walk, eventually scoring on a passed ball.

Iowa extended its lead in the sixth, pushing three runs across the plate with two outs to take a 4-0 lead. Senior Joel Booker started the rally by reaching on a hit-by-pitch before McCoy followed with a single.

Roscetti followed with a two-run double to centerfield before Peyton drove in the final run, lacing a single to left field.

The Hawkeyes finished nine innings with a 4-0 lead before pushing a single run across in the 10th and putting up a five spot in the 13th.

Woods had an RBI triple in the 10th, and Daniels and McCoy had RBI triples in the 13th. Daniels’ three-bagger came with the bases loaded.

The Hawkeyes will hold their Scout Day on Oct. 2 before hosting the Black & Gold World Series from Oct. 13-15.