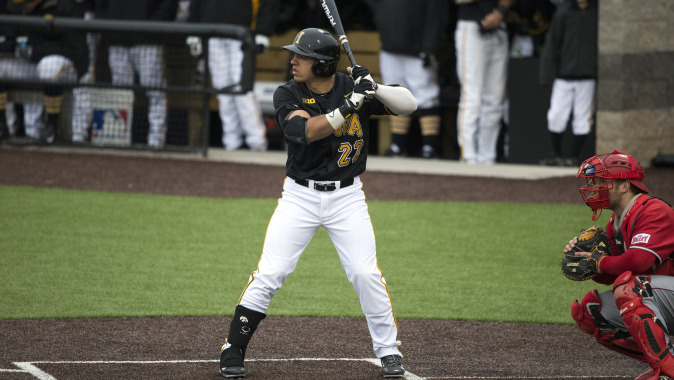 IOWA CITY, Iowa — Four pitchers combined for a seven-hit shutout to send the black team to a 7-0 game one victory over the gold team in the 2015 Black & Gold World Series on Tuesday at Duane Banks Field.

After three scoreless frames, the black team grabbed the lead, pushing three runs across the plate in the top of the fourth. Freshman Zach Daniels had an RBI single and freshman Robert Neustrom had a two-run double in the inning.

The black doubled its advantage in the sixth. After a Daniels single and Nick Roscetti hit by pitch, senior Eric Schenck-Joblinske connected on a three-run home run to right field to push the lead to 6-0. Junior Devin Pickett singled to lead off the eighth before scoring the black team’s seventh run on a Daniel Aaron Moriel hit by pitch with the bases loaded.

Senior Joel Booker and freshman Mitchell Boe paced the gold team offensively. Booker was 2-for-4 with a double out of the leadoff position, while Boe finished 2-for-3.

Sophomore C.J. Eldred was tagged with the loss, allowing one run on four hits in 3 1/3 innings in the start. Freshman Cole Baker was the only gold team hurler to not allow a run, tossing 1 2/3 perfect frames to end the contest.