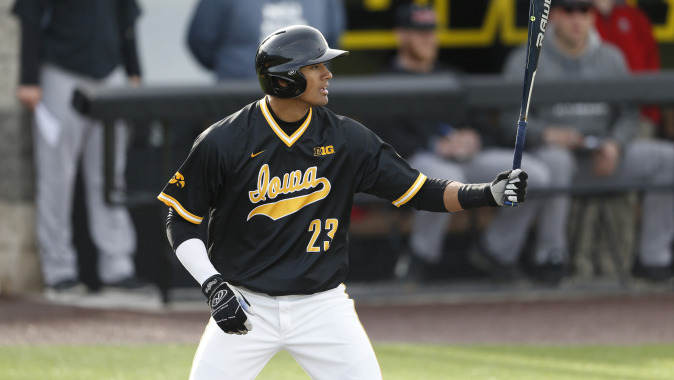 MINNEAPOLIS — A four-run fifth inning propelled the University of Iowa baseball team to a 6-3, series-tying victory over Minnesota in game one of a Sunday afternoon doubleheader at Siebert Field.

Senior Joel Booker led off the fifth with a solo home run to left field to extend the Hawkeye lead to 3-1. After a pair of walks to Zach Daniels and Daniel Aaron Moriel, freshman Robert Neustrom hit an RBI double down the right field line to knock in Iowa’s fourth run.

With runners on second and third with two down, junior Mason McCoy welcomed Gopher reliever Tyler Hanson with a two-run single to centerfield to extend Iowa’s advantage to 6-1.

Senior Tyler Peyton (1-3) earned his first victory of the season, allowing one run on five hits over five innings. The right-hander had four walks to three strikeouts in the game. Redshirt junior Ryan Erickson threw 3 2/3 innings scoreless innings before giving up a two-run home run to Dan Motl in the bottom of the ninth.

Redshirt junior Josh Martsching got the game’s final out to earn his first save.

The Hawkeyes spotted Peyton an early 1-0 lead, scoring in their opening at-bat. Booker singled to lead off the game and moved into scoring position on a Daniels sacrifice bunt. Booker scored on a throwing error following a bunt single from senior Nick Roscetti.

Iowa extended its lead to 2-0 in the third courtesy of a Peyton sacrifice fly. Daniels led off the inning with a ground-rule double and scored on the sac fly after advancing to third base on a Roscetti groundout.

Minnesota cut its lead in half in the bottom half of the third when Terrin Vavra doubled down the left field line and advanced two bases on wild pitches.

The Gophers’ Dalton Sawyer (3-3) suffered the loss, allowing six runs (five earned) on five hits over 4 2/3 innings. He had five strikeouts to four walks in the game. Hanson tossed 4 1/3 innings of shutout relief, scattering three hits and striking out six.

The Hawkeyes finished with eight hits in the game with Booker leading the offensive charge. The outfielder finished 4-for-5 with a double, home run, two runs, and an RBI.