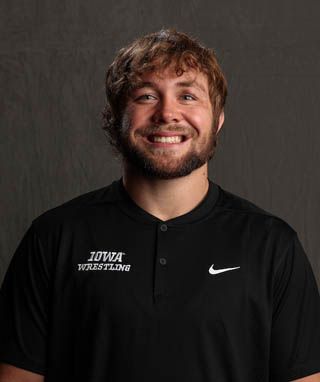 2020-21
• All-American
• Placed fourth as the No. 5 seed at the NCAA Championships
• Earned a berth to national tournament with a third-place finish at Big Ten Championships
• Posted an overall record of 13-4, including 12 wins against ranked opponents
• 13 wins tied for the team lead… reached as high as No. 2 in the national rankings
• Started all five duals at 197
• Academic All-Big Ten
• NWCA Scholar Athlete
• Letterwinner

2019-20
• All-American
• No. 5 seed at NCAA Championships
• Placed third at Big Ten Championships to earn an automatic berth to the national tournament
• Recorded an overall record of 20-4, including seven wins over ranked opponents
• Twice beat the No. 2 ranked wrestler in the country, No. 2 Pat Brucki and No. 2 Christian Brunner
• Reached as high as No. 2 in the national rankings
• Tied for the team lead with six major decisions
• Was 5-1 at Carver-Hawkeye Arena
• Placed fourth at the Midlands Championships
• Academic All-Big Ten
• NWCA Scholar-Athlete
• Letterwinner

2018-19
• All-American, placing seventh at the NCAA Championships at 197 pounds
• Placed third at the Big Ten Championships to earn an automatic berth to the national tournament
• Placed fifth at the Midlands Championships
• Posted an overall record of 21-6, including an 8-0 mark in conference duals
• Made his Hawkeye debut Dec. 1, defeating No. 5 Willie Miklus of Iowa State at Carver-Hawkeye Arena
• Was 4-0 at Carver-Hawkeye Arena
• Posted a 7-4 mark against ranked opponents
• Reached as high as No. 4 in the national rankings
• Academic All-Big Ten
• NWCA Academica All-American team
• Letterwinner

Personal
• Born on Feb. 19, 1999, in Galesburg, Illinois
• Parents are Sean and Denise Warner
• Two sisters, Abigail and Isabella
• Was on the Honor Roll all four years
• Member of National Honor Society
• Member of NEW students club
• Member of Fitness Club
• Member of the Community Service Club
• Earned his bachelor’s degree in finance
• Currently working on his master’s degree in business analytics