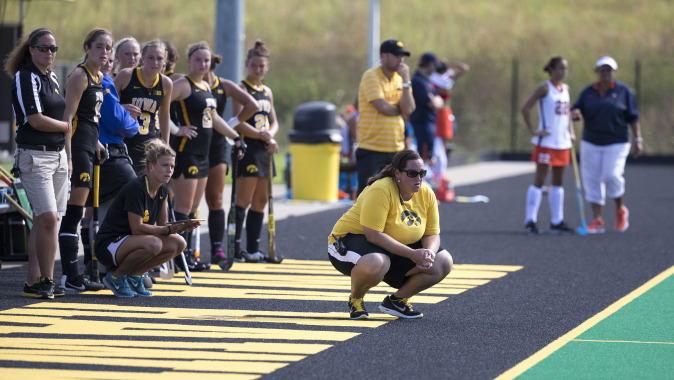 SCOUTING UC DAVIS
First-year head coach Tiffany Huisman (Old Dominion ’03) sits at the helm of the UC Davis field hockey program. Huisman has the Aggies off to a 1-3 start with a win over St. Louis, 3-1 (Sept. 6). Offensively, the Aggies are led by junior midfielder, Jamie Garcia, who has three goals and seven points on 20 shots.

SCOUTING PACIFIC
Andy Smith (The Open University) enters his second season at the helm of the Tigers field hockey program and has the Tigers off to a 2-3 start with wins over Vermont, and Appalachian State.

WE MEET AGAIN
The Hawkeyes are familiar with this week’s opponents having played all three a season ago. Iowa earned wins over UC Davis, 5-1, and Pacific, 7-2, and fell to Stanford, 2-0.

ALL-TIME SERIES
The Hawkeyes own the all-time series’ with all three foes this week, with unblemished records against UC Davis (2-0) and Pacific (8-0). Iowa is 12-6 all-time against Stanford.

IN THE RANKINGS
The University of Iowa field hockey team moved up 13 spots to seventh in the country in the 2014 Penn Monto/National Field Hockey Coaches Association (NFHCA) Division I Poll. The Hawkeyes garnered 502 points in the rankings. Iowa has been ranked each week (35 weeks) in the poll dating back to Sept. 6, 2011. Iowa is one of five Big Ten Conference schools in the rankings along with Maryland (third), Penn State (sixth), Northwestern (13th), and Michigan State (19th).

QUICK CAP-NO. 6 VIRGINIA
The No. 20 University of Iowa field hockey team (2-1) earned a 4-3 win over the Virginia Cavaliers (1-2) at Grant Field in its home opener on Sept. 4. Iowa was led by junior Natalie Cafone who completed the hat trick scoring three goals as Iowa downed its second top-20 ranked opponent this season (No. 11 Wake Forest).

CAFONE NAMED B1G POW
Junior Natalie Cafone was named Big Ten Offensive Player of the Week on Sept. 9. Cafone paced Iowa’s offensive attack with three goals on five shots in a 4-3 win over No. 6 Virginia in Iowa’s home opener on Sept. 4. This is Cafone’s second Big Ten Player of the Week honor (Sept. 24, 2013). Cafone was the last Hawkeye to record a hat trick (Sept. 22, 2013).

IOWA AT GRANT FIELD
The Hawkeyes own an overall home record of 140-46, a conference record of 60-25 at home, and an 11-2 record in NCAA Tournament games played in Iowa City.

CAFONE STEPS UP
Junior Natalie Cafone was named the University of Iowa’s 2014 Female Athlete of the Year. The Fairfield, N.J., native was the NCAA statistical champion for points per game in 2013, leading the nation in points per game (2.48) the first Hawkeye to lead nation in points per game since Kristy Gleason in 1992 (3.95). Cafone was named to the NFHCA Division I All-America second team, NFHCA West Region All-America first team, All-Big Ten first team and the All-Big Ten tournament team. The Fairfield, New Jersey, native has scored in five consecutive games dating back to the second round of the 2013 Big Ten Tournament last season. Cafone has scored 27 goals over her last 24 games.