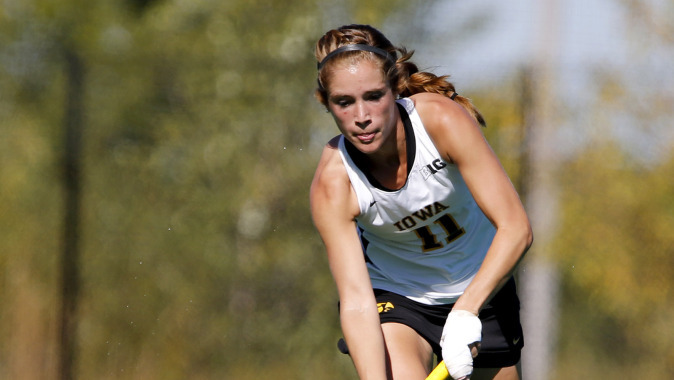 THIS WEEK
The ninth-ranked University of Iowa field hockey team (4-2) travels east to open Big Ten play on the road at Rutgers (4-2) on Sunday in Piscataway, New Jersey. Game time is set for 11 a.m. (CT).

Scouting Rutgers
Head coach Meredith Long enters her third season at the helm of the Rutgers field hockey program. The Scarlet Knights are off to a 4-2 start with wins over Bucknell, Sacred Heart, Lafayette, and William and Mary. Sofia Walia leads the program offensively with four goals, five assists, and 13 points. Rutgers’ last outing resulted in an overtime loss on the road against ninth-ranked Virginia, 4-3.

We meet again
Iowa has posted a 4-0-1 all-time record against Rutgers. The two teams last met on Sept. 16, 1995, when the Hawkeyes scored a 4-1 victory over the Scarlet Knights in Iowa City, Iowa. This marks the first meeting between Iowa and Rutgers as conference foes.

IN THE RANKINGS
The University of Iowa ranks ninth in the 2014 Penn Monto/National Field Hockey Coaches Association (NFHCA) Division I Poll. The Hawkeyes garnered 514 points in the rankings. Iowa has been ranked each week (36 weeks) in the poll dating back to Sept. 6, 2011. Iowa is one of seven Big Ten Conference schools in the rankings along with Maryland (second), Penn State (sixth), Northwestern (15th), Michigan State (16th), Indiana (17th), and Michigan (18th).

HAWKEYES IN THE NATIONAL RANKINGS
Natalie Cafone — the reigning national points leader from 2013 — currently ranks fourth nationally, and leads the Big Ten in goals per game (1.50).

QUICK CAP-UC DAVIS
Iowa defeated UC Davis in a neutral-site matchup on Sept. 11, in Stanford, California. Junior Natalie Cafone got the Hawkeyes off to a fast start netting a goal just under the four-minute mark lifting Iowa to a 1-0 advantage. Senior Dani Hemeon registered the assist. Iowa’s offense erupted in the second half netting a pair of goals in the first two minutes from freshman Mallory Lefkowitz (35:33), the first of her collegiate career, and Cafone (36:24), giving the Hawkeyes a 3-1 lead. The offense never decelerated as the visiting team again had the home team’s number in shot attempts, 22-5.

QUICK CAP-#8 STANFORD
Iowa fell short at Stanford on Sept. 12, 2-1, in an overtime loss at Varsity Turf Field in Stanford, California. Defense kept the Hawkeyes alive early as they trailed Stanford in both shots (4-1), and penalty corners (2-1), in the first period. Iowa’s lone chance at a score came in the 14th minute as Natalie Cafone drove for a score but was denied by Stanford’s Dulcie Davies. Both teams went into intermission scoreless. Iowa’s lone goal came in the 56-minute mark off the stick of Sophie Plasteras to give the Hawkeyes a 1-0 lead. The goal, assisted by Cafone, marked Plasteras’ first score of the season. A late goal from the home team evened the score at 1-1 with seven minutes to go. With five minutes to go in overtime, Stanford’s Jessica Chisholm knocked in the game-winner closing the door on the Hawkeyes, 2-1.

QUICK CAP-PACIFIC
Iowa earned a 5-1 win over the Pacific Tigers Sept. 14, in Stockton, California. The Hawkeyes came out flying in the opening period scoring a trio of goals to claim a 3-0 lead over the home team. Dani Hemeon led the offensive attack scoring at the 2:39 mark giving Iowa the opening lead. Natalie Cafone took her turn scoring in the 29th minute lifting the visitors to a 2-0 advantage. Hemeon struck again in the 30th minute extending the Hawkeyes lead, 3-0, heading into intermission. The Tigers threatened with a goal off the stick of Pacific’s Nicole Laskosky in the 64th minute to narrow the gap, 3-1. The Hawkeyes were quick to respond with back-to-back scores in a two-minute span putting the visiting team up by four. Cafone netted her second goal of the game in the 66th minute to stretch the lead, 4-1. Stephanie Norlander capped the offensive attack for Iowa in the 68th minute with her third goal on the season sealing a 5-1 decision that favored the Hawkeyes.

CAFONE NAMED B1G PLAYER OF THE WEEK
Junior Natalie Cafone was named Big Ten Offensive Player of the Week on Sept. 9. Cafone paced Iowa’s offensive attack with three goals on five shots in a 4-3 win over No. 6 Virginia in Iowa’s home opener on Sept. 4. This is Cafone’s second Big Ten Player of the Week honor (Sept. 24, 2013). Cafone was the last Hawkeye to record a hat trick (Sept. 22, 2013).

IOWA AT GRANT FIELD
The Hawkeyes own an overall home record of 140-46, a conference record of 60-25 at home, and an 11-2 record in NCAA Tournament games played in Iowa City.

CAFONE STEPS UP
Junior Natalie Cafone was named the University of Iowa’s 2014 Female Athlete of the Year. The Fairfield, N.J., native was the NCAA statistical champion for points per game in 2013, leading the nation in points per game (2.48) the first Hawkeye to lead nation in points per game since Kristy Gleason in 1992 (3.95). Cafone was named to the NFHCA Division I All-America second team, NFHCA West Region All-America first team, All-Big Ten first team and the All-Big Ten tournament team. Cafone has scored 31 goals over her last 27 games.