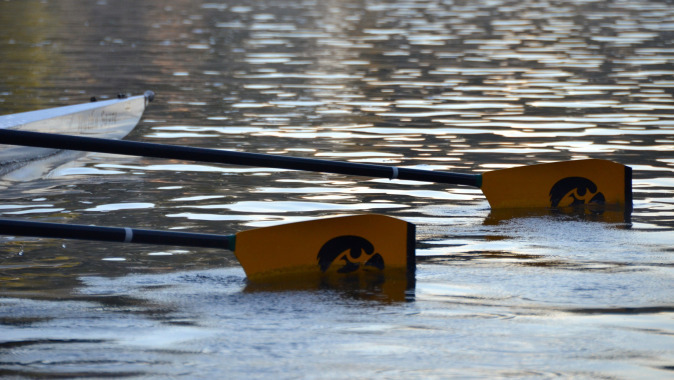 THIS WEEK:
The University of Iowa women’s rowing team continues the regular season with conference competition against tough No. 7 Michigan and Michigan State crews in Big Ten Double Dual action in Ann Arbor, Michigan, this Saturday. Two of the three teams qualified for the NCAA Championships in 2014, with Michigan and Indiana earning eighth and 11th national finishes, respectively.

RACE STRUCTURE:
For Big Ten conference competition, a point system is used to determine a dual-meet winner. Points are awarded in each boat class (both varsity eights, varsity fours, and novice eights) to determine a winner. In addition, Michigan and Iowa will each field 3V4+ and will race one another in both sessions. The full day of racing will take place on Belleville Lake and will begin at 8 a.m. (CT) on Saturday morning with the 2N8+ from Michigan State and Iowa.

Racing will be held in 12-minitue intervals, alternating between Iowa vs. Michigan State and Michigan vs. Indiana in the morning session, through 1V8+ racing at 10:12 and 10:24 a.m. In the afternoon session, Iowa and Michigan will flight boats in the 2N8+ starting at 12:12 p.m., with an identical alternating format through the 1V8+ races at 2:12 and 2:24 p.m.

SCOUTING THE COMPETITION:
No. 7 Michigan collected wins over Clemson and No. 4 Virginia at the ACC/Big Ten Challenge & Navy event on April 4. The team won Boat of the week conference honors after the 1V8+ edged Clemson and Navy in the morning session with a time of 6:20.90. Bested No. 4 Virginia in the final race of the afternoon with a time of 6:22.36. Last year, Michigan finished second at the Big Ten Championships, with four athletes named to All-Big Ten Teams.

No. 15 Indiana hosted West Virginia in an informal scrimmage on Lake Lemon April 4. While no formal scores were kept, the crews gained experience in a competitive environment and raced boats in perfect conditions. Iowa faced off against Indiana in the fall for an informal scrimmage on Oct. 4. The margins were very close with Iowa finishing ahead of the two Indiana crews on three of the four intervals contested. The fourth interval, Iowa finished between the two Hoosier boats. Last year, the Hoosiers took fourth at Big Ten Championships and 11th at NCAA Championships, with their strongest performance from their 1V8+ (6:38.06).

Michigan State fell to No. 14 Notre Dame and No. 18 Louisville during a tough race on 2014 Big Ten Champions Ohio State’s home course in Columbus, Ohio on March 28. The Spartan’s top performance of the competition came from the N8+ boat, which swept all of its races. Last year, the Spartans finished fifth at Big Ten Championships, with their strongest performance from their 1V4+ (7:35.62).

LAST TIME OUT:
Iowa battled through tough conditions to flight crews against historically strong Cornell and No. 6-ranked Yale in season-opening action on April 3 at the Cayuga Inlet in Ithaca, New York. In the first session, the Hawkeyes placed second in every event behind No. 6-ranked Yale, but ahead of a storied program in Cornell — an early sign of strength for Iowa rowing against strong Ivy League programs, who finished fourth and fifth, respectively, in their conference championship a season ago. Session I ended one event early, as dark- ness and debris pushed the final 1V8+ race to Saturday morning at 7:30 a.m. with Session II to follow.

The following morning, the Hawkeyes’ top V8+ crew battled through inclement weather and debris on the 2,000-meter course to finish third overall with a time of 6:11.40. Yale crossed the finish line first with a time of 5:55.60, followed by runner-up Cornell, clocking a time of 6:03.20. The remainder of the regatta schedule was cancelled following the event due to unsafe rowing conditions.

UP NEXT:
The Hawkeyes will travel to Kansas City, Kansas, for the B1G/Big12 Challenge on April 25-26. Iowa will take on Wisconsin, Kansas, and Oklahoma in a full weekend of racing.