No. 72 Hawkeyes Win at Nebraska 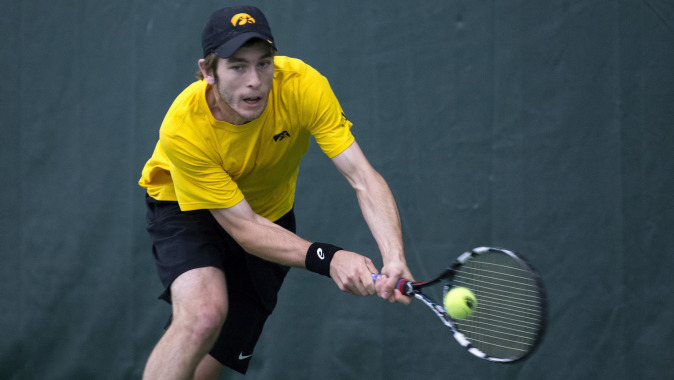 LINCOLN, Nebraska — Headlined by solid performances at No. 4 and No. 6 singles, the 72nd-ranked University of Iowa men’s tennis team (12-6, 4-3) claimed a 4-2 victory over the Nebraska Cornhuskers at the Lincoln Racquet Club. The conference win aids in Iowa’s pursuit of a higher seed at the Big Ten tournament beginning April 22.

“It was a big win for us today in a tough three-court building. We are the only team to beat Nebraska in its home building this spring. Dominic had a big win; he battled nerves and beat a good player. Lefteris also played a solid match from start to finish. We need performances from them like that going down the stretch,” said UI head coach Ross Wilson.

With the Hawkeyes leading the match 3-2, Jake Jacoby stepped on the court with hopes to seal the victory for his team at No. 6 singles. The freshman matched up with Nebraska’s Vasilis Stavropoulos. Jacoby took the first set 6-1 before wrapping it up with a 6-2 win in the second set. He has won five of his last six singles matches. As a result of Iowa winning the match, the doubles portion was abandoned.

At No. 4 singles, Josh Silverstein made quick work of Chris Hobgarski winning the match in straight sets, 6-1, 6-1. The Iowa freshman has won 13 of his last 15 singles matches. Junior Dominic Patrick was the first to put Iowa on the board registering a straight set win at the No. 2 position. Patrick won the first set over Marc Herrmann 6-4. He then edged out the Nebraska fourth position player in the second set with a narrow 7-5 victory.

Looking at a 2-2 tie, Lefteris Theodorou put the Hawkeyes ahead with a straight set victory, 7-6, 6-3, over the Cornhuskers’ Linus Erhart.

Matt Hagan, ranked 112th nationally, fell in a close three-set match to Dusty Boyer, 6-7, 6-4, 6-7. At the No. 5 position Stieg Martens was defeated by Bradford Zitsch.

Iowa has a tough weekend ahead as it travels to Champaign, Illinois, Saturday for a battle with No. 3 Illinois at noon (CT) before an in-state trip to Evanston, Illinois, for another Big Ten opponent in No. 26 Northwestern on Sunday noon (CT).