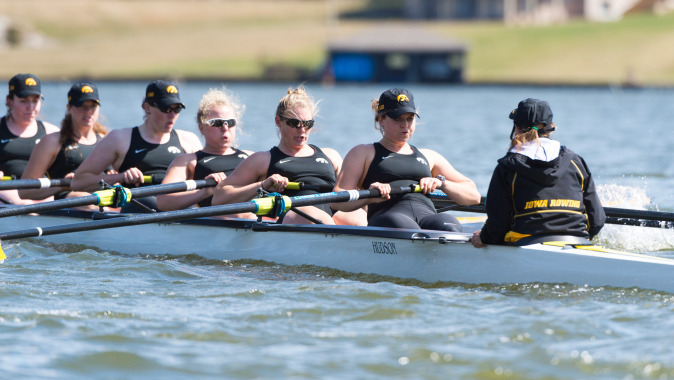 IOWA CITY, Iowa — The University of Iowa women’s rowing team finished first in all but one of their races this morning. They raced against Tennessee and Central Florida in Oak Ridge, Tennessee. The Hawkeyes took advantage of the excellent racing conditions on Melton Hill Lake.

The morning started with the 1V8+ race. Iowa gained an early boat-length advantage over Tennessee and were stroke for stroke with UCF. The Hawkeyes and Knights continued to battle it out for the first half of the race. In the last 500 meters that the Knights found their lead and crossed the line ahead of the Hawkeyes.

The 2V8+ crews lined up next. UCF pushed their bow in front off the line but the Hawks pushed back to level before the 500-meter mark. The Knights and the Hawkeyes were close through the first 1,000 meters, when Iowa began to pull away. Iowa beat both Central Florida and Tennessee by open water.

In the 2V4+ race, the Hawkeyes had open water on both teams by the 500. They continued to pull away throughout the 2,000 meters course, finishing a full 13.3 seconds ahead of Tennessee and 19.6 ahead of UCF.

The last race of the morning was 1N8+. The Hawkeyes 1N8+ raced against both Tennessee’s and Central Florida’s 3V8+. The Hawkeyes gained a full boat length lead in 15 strokes and had an open water before the 250-meter mark. The crew expanded the lead throughout the race and crossed the finish line 44.4 seconds ahead of the Vols and 49.8 seconds ahead of the Knights from Central Florida.