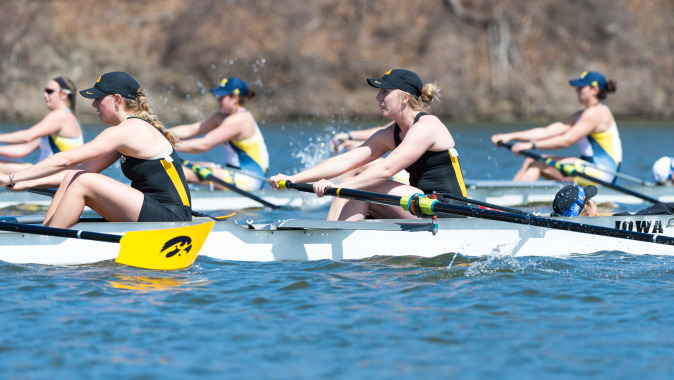 Read the May issue of Hawk Talk Monthly

THIS WEEK:
The University of Iowa women’s rowing team travels to Indianapolis, Indiana, on Saturday to compete in the Big Ten Championships at Eagle Creek Park. Races are scheduled to begin at 4 p.m. CT on Saturday and 8 a.m. CT on Sunday.

Eight teams will be competing for the title of conference champion — Ohio State, Michigan State, Michigan, Indiana, Wisconsin, Minnesota, Iowa and newcomer Rutgers. This year marks the fifth consecutive time the event has been held at Eagle Creek Park. The Big Ten Network will televise the Big Ten Rowing Championships, on tape delay. The championship will be shown on Sunday, May 24 at 5 p.m. (CT).

RACE STRUCTURE:
The full day of racing will take place at the Indianapolis Rowing Center in Eagle Creek Park. Saturday will consist of multiple heats for each semifinal race, while Sunday will be dedicated to the finals for each race.

A LOOK BACK AT THE 2014 BIG TEN CHAMPIONSHIPS:
? The Hawkeyes finished seventh at the 2014 Big Ten Championship at Eagle Creek Park in Indianapolis, Indiana.

? The Hawkeyes’ recorded their best team score at the Big Ten Championships in 2003 with a 99-point effort. Iowa finished fourth, the highest in program history. Michigan and Michigan State tied for the title with a score of 123.

? Iowa has had one boat win a Big Ten Championship title in program history. The boat of Beth Groteluschen, Laura Balogh, Anneke Diem, Katie Hauck and Emily Burmeister, won the 2V4+ race with a time of 7:32.90 in 2003.

? Iowa has had 13 first team All-Big Ten selections in program history; Zoe Ribar (2014) was the most recent first team selection for the Hawkeyes.

IN THE RANKINGS:
Iowa continues to receive votes in the CRCA/US Rowing Coaches Poll. The Hawkeyes continue to gain new votes after their performance at Tennessee, bringing the total to 10. The Black and Gold are also ranked fifth in Region Four of the NCAA Regional Rankings.

SCOUTING THE COMPETITION:
No. 1 Ohio State claimed the 2014 Big Ten Rowing Championship, the program’s fifth conference title, and third in the last four years. Buckeye boats took first place in five out of the seven events (1V8+, 2V8+, 1V4+, 2V4+, 3V4+). Ohio State’s best performance of the day came from its 1V8+ crew, who took first place and crossed the finish line with a time of 6:29.38. Following the conference championships, Ohio State went on to win its second consecutive NCAA title. So far this season, the Buckeye’s 1V8+ boat has remained undefeated with a 10-0 record.

Michigan State fell to Big Ten rivals Wisconsin and Minnesota on May 2 at the Devil’s Lake Challenge in Baraboo, Wisconsin. MSU finished third in the 1V8+, 2V8+, and 1V4+ races, and second to Wisconsin in both the 1N8+ and 2N8+ races. The Spartans took fifth place at last year’s Big Ten Rowing Championship. Michigan State’s best perfor- mance of the day came from its 1V4+ crew, who took first place and crossed the finish line with a time of 7:35.62. Michigan State has clamed three Big Ten Championship titles in its program history (2005-08-09).

No. 12 Michigan collected first place finishes in all four varsity races against Louisville on May 2 at Belleville Lake. Michigan’s second varsity four crew collected the team’s first win of the day while also recording the best time of the day amongst all the fours with a 7:16.00 finish. The Wolverines took second place at last year’s Big Ten Rowing Championship. The Michigan 1N8+ boat claimed an individual boat title, finishing with a time of 7:04.57. Michigan has clamed five Big Ten Championship titles in its program history (2000-01-03-04-12).

Indiana finished second at the 7th Annual Dale England Cup on April 25 in Bloomington, Indiana. The Hoosiers finished behind Texas and ahead of Notre Dame and Columbia. Indiana crews finished first in the 1V8+ and the 2N8+ races. The Hoosiers took fourth place at last year’s Big Ten Rowing Championship. Indiana’s best performance of the day came from its 1V8+ crew, who took third and crossed the finish line with a time of 6:38.06.

The ninth-ranked Wisconsin finished the regular season against Michigan State and Minnesota at the Devil’s Lake Challenge in Baraboo, Wisconsin, on May 2. The Badgers swept the Devil’s Lake Challenge, winning six of the seven races by at least 8.39 seconds. The strong performance against the two Big Ten foes led to a Big Ten Boat of the Week honor for the Badger’s 1V8+ crew. Last year, Wisconsin took third place at the Big Ten Rowing Championship. The Badger 2N8+ boat collected an individual title after crossing the finish line with a time of 7:16.12. Wisconsin has clamed a single Big Ten Championship title in its program history (2010).

Minnesota finished the regular season against host Wisconsin and Michigan State at the Devil’s Lake Challenge in Baraboo, Wisconsin, on May 2. The Golden Gophers collected four second-place finishes in the 2V4+, 1V4+, 2V8+, and 1V8+ races. Last year, the Golden Gophers took sixth place at the Big Ten Rowing Championship. Minnesota’s best performance of the day came from its 3V4+ crew, who took third and crossed the finish line with a time of 8:09.55. The Golden Gophers have clamed a single Big Ten Championship title in its program history (2007).

Rutgers competed at the Eastern Association of Women’s Rowing Colleges Sprints on May 4 in Camden, New Jersey. The Scarlet Knights competed against crews from Northeastern, Navy, Georgetown, West Virginia, Columbia, Dartmouth, Harvard Radcliffe, and MIT. The Scarlet Knights’ 2V8+ posted the best finish on the day, collecting fourth out of seven boats in the Final 2. This year, Rutgers makes their debut at this year’s Big Ten Rowing Championship. Before joining the Big Ten, Rutgers competed Last year, RU finished in fifth place at the All-American Athletic Conference Championships by accumulating 101 points on Lake Mercer in West Windsor, New Jersey. Rutgers’ V4+ crews had the strongest performances of the day, with the 1V4+ and 3V4+ crews placing second with times of 7:33.902 and 8:15.660, respectively, in their grand final events.

LAST TIME OUT:
Iowa finished first in all but one of their races against Tennessee and Central Florida in Oak Ridge, Tennessee, on May 2. The morning started with the 1V8+ race, where Iowa gained an early boat-length advantage over Tennessee and were stroke for stroke with UCF. In the last 500 meters of the race, the Knights recovered to cross the line ahead of the Hawkeyes.

The 2V8+ crews were the second to race on the day. The Knights and the Hawkeyes were close through the first 1,000 meters, when Iowa began to pull away. Iowa beat both Central Florida and Tennessee by open water.

The 1V4+ race followed, with Iowa in lane four. The Hawkeyes pulled ahead from the rest of the field early. Iowa continued to stretch their lead throughout the race and finished 15.4 seconds ahead of the Lady Volunteers and 23.1 seconds ahead of the Knights. The Hawkeyes went undefeated in the rest of the morning, collecting first place finishes in the 2V4+ and the 1N8+.

CHAMPIONSHIP SEEDS:
The Hawkeyes are seeded fifth in the 1V4+ event and will race in the first heat in lane five, while the 1N8+ boat enters its race as the fifth seed and will appear in the fifth lane in heat one. Iowa received the sixth seed for the 1V8+ and 2V8+ events and will race in the fifth lane of heat two. For the finals, Iowa is seeded third in the 2V4+ race with a lane five assignment, seeded fourth for the 3V4+ race in lane two, and seeded sixth for the 2N8+ race and will appear in lane one.

GRASTORF SELECTED FOR US WOMEN’S U23 CAMP:
Sophomore Morgan Grastorf of the University of Iowa women’s rowing team was accepted to the 2015 U.S. Women’s Under 23 National Team Selection Camp in Princeton, New Jersey, as announced by USRowing on Tuesday. Performances at the camp will determine selections for the women’s eight, four and quadruple scull crews that will compete on July 22-26 at the World Rowing Under 23 Championships in Plovdiv, Bulgaria.

Twenty-five athletes were honored, and Grastorf is one of six Big Ten athletes to be selected. Selection camp invitations were based on performance on the 2014-15 National Team Ergometer Testing Protocol, coach recommendations, past racing performances, and competitive performance during training sessions and the athlete’s ability to match the style and technique of the crew as determined by the designated coach.

In her inaugural season, the Naperville, Illinois, native earned 2014 Pocock All-America Second Teaforays CRCA First Team All-Central Region honors. She was one of eight freshmen and one of 16 student-athletes invited to attend the 2014 USRowing Women’s Pre-Elite Camp, which grooms up-and-coming rowers for the national teams.