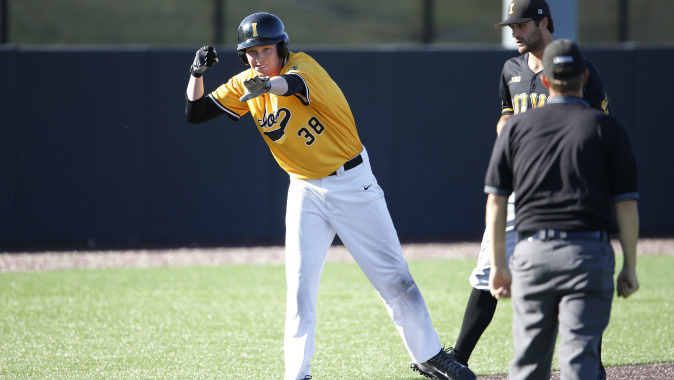 The gold team pounded out 15 hits and scored in six of the nine innings. Five different players posted multi-hit games with senior Joel Booker leading the way with a 3-for-4, two-run, one-RBI performance out of the leadoff position.

The gold team got the scoring started in its first at-bat, jumping out to a 1-0 lead on a bases loaded walk from senior John Barrett. Back-to-back extra base hits — a double by Peyton and a triple from Luke Farley — led to the gold team’s second run before Farley scored to make the score 3-0 on an RBI groundout.

After scoring their fourth run on a black team error in the fifth, the gold team pushed the lead to 7-0 in the top of the sixth on a Peyton sacrifice fly, a Farley groundout, and an infield single from Barrett.

The black team fought back, pushing three runs across in the bottom of the inning.

Senior Eric Schenck-Joblinske drove in the first run on an RBI groundout, plating Corbin Woods, who led off the inning with a double. Sophomore Grant Klenovich had an RBI double, and junior Zach Fricke had an RBI single in the inning.

The gold team pushed its lead to 10-3 in the eighth inning, courtesy of three hits. Allgeyer led off the frame with a triple to left field before scoring on an Owens RBI double to left field. Owens made the score 9-3 on a Dametri Evans sacrifice fly before Booker knocked in the third run with an RBI single to right field.

The black squad wouldn’t go away, plating six runs in the bottom of the eighth inning to climb to within 10-9. Reliever John Forsythe walked in the first two runs in the inning before Woods cut the lead to 10-7 with a two-run single to centerfield. Freshman Robert Neustrom followed with a two-run single to make the score 10-9, but the freshman was picked off at first base to end the inning.

The gold team tacked on an insurance run in its final at-bat, courtesy of an RBI single from Owens.

Peyton started for the gold team on the mound, allowing one run on two hits over 3 2/3 innings. Junior Josh Martsching earned the win, allowing a single hit and striking out two in 1 1/3 innings. Senior Tyler Radtke struck out two of the three batters he faced in the ninth to record the save.

Senior Luke Vandermaten suffered the loss for the black team, allowing three runs on four hits over 2 1/3 innings. Junior Jared Mandel was the only black team reliever not to yield a run, getting the game’s final two outs.

The deciding game of the Black & Gold World Series will begin at approximately 2 p.m. (CT) Thursday.