Notes: Iowa Set to Play No. 3 UCLA in NCAA Second Round

THIS WEEK
After notching the first NCAA Tournament victory in program history, the University of Iowa soccer team will face the third-overall seed in UCLA on Friday in the Second Round of the NCAA Tournament. The game will be played in Buies Creek, North Carolina, beginning at 2 p.m. (CT) and will be streamed live on ESPN3.

LAST GAME
The Hawkeyes notched their first-ever NCAA Tournament win against Big South champion Campbell on Tuesday. Sara Wheaton fielded a corner kick from sophomore Samantha Cary in the opening minutes of the game and launched in a goal off a deflected ball through a scrum near the net.

POSTSEASON HISTORY
Iowa made history this postseason, winning the program’s first-ever Big Ten Tournament Championship. The underdog-Hawkeyes shocked No. 4 Penn State with a 1-0 victory in the semifinals before defeating Wisconsin in the title match to secure an automatic bid to the NCAA Tournament. The Hawkeyes carried that momentum to the Big Dance, where they secured the program’s first NCAA Tournament victory with Tuesday’s shutout against Campbell.

CAROLINA ON THEIR MINDS
Hosted in Cary, North Carolina, the NCAA Tournament consists of six single-elimination rounds, with the second round taking place April 30-May 1 and the final to be held on May 17.

RIDING THE STARTERS
The Hawkeyes have utilized just three subs during each of their previous three outings at the Big Ten Tournament. Natalie Massa, Gianna Gourley, and Olivia Hellweg are the only subs who checked in for Iowa in its games against Penn State, Wisconsin, and Campbell. Iowa has averaged just 47:20 bench minutes across those three contests.

MEIKE “POSTSEASON” INGLES
Freshman forward Meike Ingles attempted 20 shots without scoring a goal during the Hawkeyes’ regular season slate.  In the postseason, Ingles has three goals — all game-winners — on 14 shots across five victories. 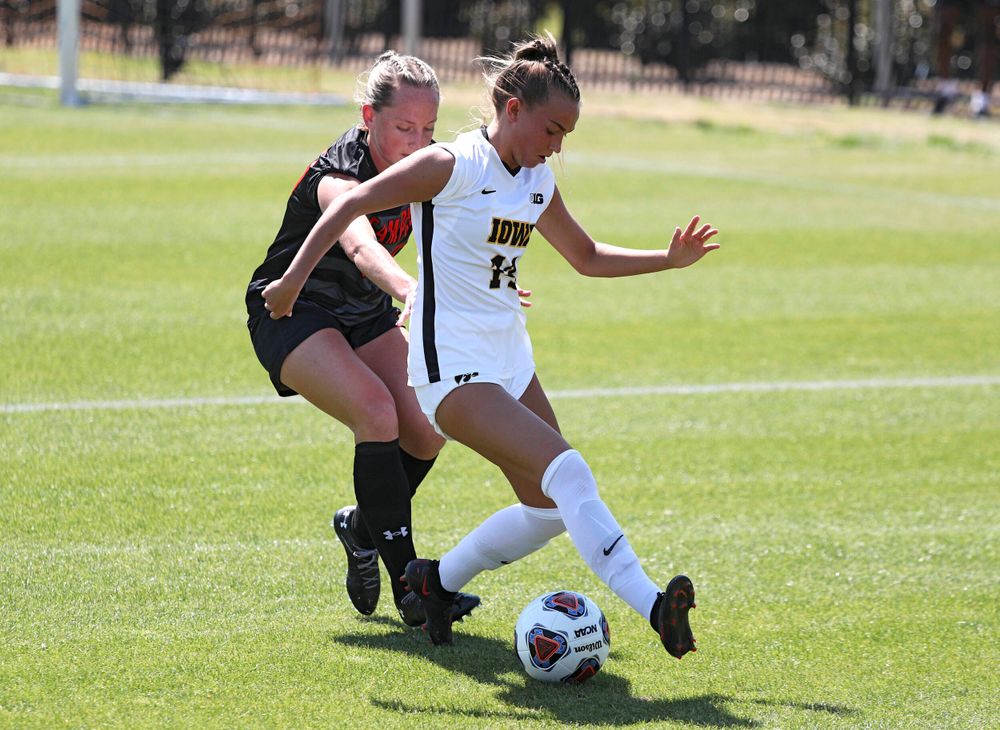 ENNEKING AT GOALKEEPER
Freshman goalkeeper Macy Enneking  has tallied 48 saves across nine games this season, including seven wins and six shutouts. Enneking leads the Big Ten in save percentage (.929) and goals against average (.349).

GOAL YOU VERY MUCH
After not finding the back of the net in the first six games, six different Hawkeyes have scored over the final 10.  Freshman Meike Ingles leads the team with three strikes and juniors Samantha Tawharu and Sara Wheaton have scored twice.

FRESHMEN STRONG
Six Hawkeye freshmen have started games this season.  Rielee Fetty has started a freshman-high 15 contests, while Meike Ingles and Aleisha Ganief have 13 starts each.  Enneking made her first career start at Maryland and has been in goal the past nine contests, while Maggie Johnston (6) Jalyn Mosley (3) also were among the starting 11 before going down with injuries.

GETTING CHANCES
The Hawkeyes have out-shot their opponents in eight of 16 games this season. Junior Hailey Rydberg (40) and freshman Meike Ingles (34) lead the way in shot attempts, taking 44 percent of the team’s shots.

FRESH HAWKEYES
A year after having one of the most veteran teams in the nation with 14 seniors in 2019, the Hawkeyes have one of the youngest.  Iowa has only one senior on the 2021 spring roster in Diane Senkowski.  Eighteen of the 28 players on the roster are underclassmen.

LOOKING AHEAD
The winner of Tuesday’s game will advance to the Sweet 16 to face the winner of Rutgers vs. Clemson on May 5 in Buies Creek.