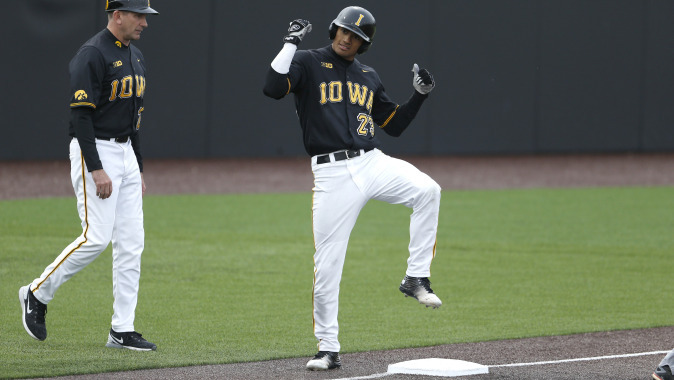 THIS WEEK
The University of Iowa baseball team opens Big Ten Conference play, hosting Maryland for a three-game series from March 25-27 at Duane Banks Field. Friday’s series opener is slated for a 3:05 p.m. (CT) start, Saturday begins at 2:05 p.m., and Sunday’s finale is set for 12:05 p.m.

GAME COVERAGE
? All three games will be video streamed live on BTN Plus on BTN2Go. Zach Mackey will handle the play-by-play for Friday and Saturday’s contests.
? The series will also be available on AM-800 KXIC and online via Hawkeye All-Access. Brent Balbinot will be on the call with Steve Duncan providing color commentary.
? Live statistics will be available at www.hawkeyesports.com and fans can follow the action via Twitter/UIBaseball.

IOWA TIDBITS
? The Hawkeyes led in parts of all three games in the series at Missouri State, but left Springfield without anything to show for it at weekend’s end. Iowa is now 0-6 against ranked opponents this season.
? Iowa is 1-3 in one-run games and 2-4 in games decided by two runs or less.
? The Hawkeyes are out-scoring their opponents, 35-21, over the first two innings.
? Iowa is 5-1 when leading after six innings, but 1-6 when trailing after six innings.
? Junior Mason McCoy has started the last 14 games at third base after starting the first four contests at second base. McCoy has one error in 48 chances this season.

MARYLAND NOTABLES
? The Terrapins evened their record at 10-10 with a 10-9 victory over Liberty on Tuesday in College Park. It comes on the heels of a series win at Cal State Fullerton last weekend.
? Maryland is hitting .276 as a team with three regulars hitting above .300. Nick Dunn leads the team with 28 hits, 19 runs, and six doubles. Kevin Biondic is hitting .233 with three home runs and Nick Cieri has a .303 average.
? The Terrapins, who are averaging 5.6 runs per game, are 3-6 in road games in 2016.
? Maryland’s pitching staff has a 4.83 ERA, allowing 189 hits and 116 runs in 175 innings.
? Staff ace RHP Mike Shawaryn (2-1, 2.97 ERA) will take the ball Friday, RHP Taylor Bloom (3-2, 2.19 ERA) will start Saturday, and RHP Brian Shaffer (2-1, 2.83) on Sunday.
? Bloom and Shaffer threw back-to-back complete games at Fullerton. Bloom allowed four runs (two earned) on 12 hits in an 8-4 Maryland win. Shaffer tossed a complete game shutout, scattering seven hits and fanning five in a 1-0 victory en route to being named the Big Ten Pitcher of the Week.

SERIES RECORD
Iowa leads the all-time series over Maryland, 2-1. The Hawkeyes took 2-of-3 games last season in a series in College Park. The Terrapins won the opener, 10-1, before Iowa won 3-1 and 2-1 to take the series.
? Calvin Mathews, Ryan Erickson, and Luke Vandermaten combined to limit Maryland to one run on six hits in the series finale. Nick Day scored the go-ahead run in the top of the seventh.

A WALK-OFF WINNER
? Iowa rallied for a 7-6 victory over Bradley with two runs in the bottom of the ninth inning on March 22 at Banks Field. It was the Hawkeyes’ first win when trailing after six innings this season.
? Seniors Eric Schenck-Joblinske tripled and scored the tying run when Zach Daniels reached on an RBI fielder’s choice. Nick Roscetti’s RBI single gave Iowa its seventh walk-off victory in the last season and a half.

BANKS MAGIC
Iowa is 19-3 at home since the start of the 2015 season. The Hawkeyes went 17-3 last season for the most home victories since 1996. Iowa has five walk-off victories at Duane Banks Field since 2015.

BOOKER’S BREAKOUT
Senior Joel Booker is doing his part to be the catalyst at the top of the Hawkeye lineup. In his first season as Iowa’s leadoff hitter, the Columbus, North Carolina, native is having a breakout season.
? The outfielder is hitting .382 with 29 hits and 17 runs scored. He has seven doubles, two triples, and one home run — equally his extra base hit output from his junior season.
? Booker has two triples in the last three Hawkeye games and four multi-hit contests — three of which are three-hit games — in his last six games. He is second on the team with eight multi-hit games.
? He is riding a career-best 13 game hitting streak and has reached safely in 16 consecutive games and in 17-of-18 contests this season.
? Booker has posted career-bests in hits (4 vs. Chicago State), RBIs (4 vs. Savannah State), and tied a career-high in runs (3 at Missouri State) this season.

DANIELS EARNS B1G HONOR
Freshman Zach Daniels earned Big Ten Freshman of the Week honors on March 14 after hitting .571 with five RBIs and three runs scored in two Iowa victories. He had four RBIs in a 28-0 win over Northwestern College and went 3-for-4 with two runs and an RBI in a win over Savannah State.
Daniels is the first Hawkeye to earn Freshman of the Week honors since Austin Guzzo in 2015.

OFFENSIVE NOTES
? Freshman Robert Neustrom is hitting .348 over his last nine games. The Sioux City, Iowa, native hit .500 in the series at Missouri State, and he has the first two three-hit games of his career during the stretch.
? Sophomore Austin Guzzo scored five runs against Northwestern College to tie a school record. He is one of three players to score five runs in a game and the first since John Mahoney in 1978.

SOPHOMORE C.J. Eldred…
? has been Iowa’s most consistent pitcher, going 1-2 with a 2.43 ERA in five appearances (four starts).
? had 17 strikeouts to two walks in his first four appearances before striking out one and issuing six walks at Missouri State (3/18).
? posted back-to-back quality starts against Southern Illinois and Omaha… threw nine innings of two-hit, one run ball against the SIU. He had a no-hitter through 7 2/3 innings, but wasn’t involved in the decision. He allowed three runs in six innings in a 3-2 loss to Omaha.
? picked up his first career win against Dartmouth in his first career start, allowing one run on four hits over five innings, fanning five.
? sat out the 2015 season after transferring from Indiana University, where he redshirted in 2014.
? is the son of former Hawkeye first round MLB Draft pick and Major Leaguer Cal Eldred.

SENIOR Tyler Peyton…
? logged a quality start at Dallas Baptist, going 6 1/3 innings, scattering two hits, and striking out six. Both runs were unearned, as he took the loss.
? has struggled in last two starts, going 0-2 with a 9.24 ERA in losses to Indiana State and Seton Hall and a no-decision at Missouri State… allowed 13 runs on 18 hits over 12 2/3 innings.
? did not pitch at Southern Illinois due to forearm tightness. His rotation spot is TBA for the Big Ten opener against Maryland.
? is 12-8 in his Iowa career with a 4.07 ERA in 34 starts. Peyton has 15 quality starts and has pitched into the seventh inning 14 times in his career.
? has logged 190 innings in two-plus seasons, where he has 134 strikeouts to 63 walks.
? earned third-team All-America honors by D1Baseball.com and the USBWA as a junior.
? has the best change-up in the Big Ten Conference according to Baseball America.

IN RELIEF…
? Iowa’s bullpen has been strong, posting a 3.09 ERA. The Hawkeye relievers have allowed 37 runs (28 earned) in 81 2/3 innings and are holding opposing hitters to a .255 average.
? Sophomore Nick Gallagher is 2-1 with a 1.50 ERA in four relief appearances. The right-hander moved to the bullpen after earning a Saturday start in the season-opening series at Dallas Baptist. He has allowed three runs on 13 hits over 16 innings as a reliever, striking out 16 and issuing five walks.
? Freshman Zach Daniels is 1-1 with a 1.59 ERA, striking out five and walking zero in 5 2/3 innings. He earned his first career victory, pitching a perfect ninth against Bradley on March 22.
? Senior Ryan Erickson hasn’t allowed a run in his last two appearances, spanning three innings. He has two strikeouts (two three walks) and has surrendered one hit during the stretch.