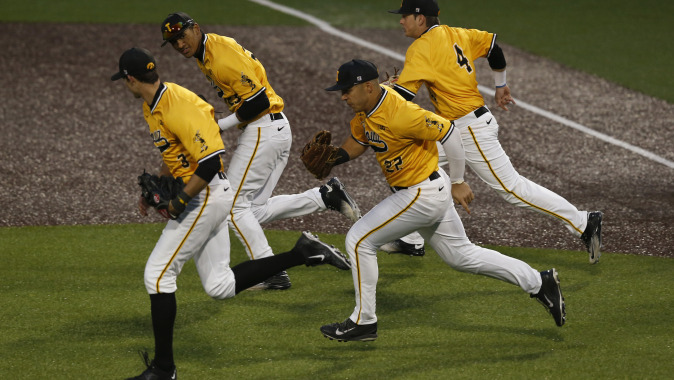 THIS WEEK
The University of Iowa baseball team welcomes Illinois to Duane Banks Field for a three-game Big Ten Conference series from April 8-10. Friday’s series opener will start at 4:05 p.m. (CT) followed by 2:05 p.m. and 1:05 p.m. starts Saturday and Sunday.

FAN PARKING
With the 2016 Olympic Team Trials being held in Carver-Hawkeye Arena, parking will be at a premium around Duane Banks Field on Saturday and Sunday. There will be a charge to park in university lots.

IOWA TIDBITS
? Iowa lost just its second Big Ten series since the start of 2015 last weekend, dropping two of three games at Minnesota. The Hawkeyes have won nine of their last 11 league series since the start of 2015.
? Iowa has 17 home runs in 26 games — ranking sixth in the Big Ten — this season with nine different players hitting at least one home run. Joel Booker, Tyler Peyton, and Austin Guzzo pace the team with three home runs apiece.
? The Hawkeyes rank in the top five in the Big Ten in pitching and defense. Iowa’s fielding percentage of .978 is tops in the conference, while the 3.58 ERA ranks fifth.
? Six Iowa pitchers combined to two-hit Milwaukee in a 9-1 victory Wednesday at Duane Banks Field. It was the team’s first two-hitter of the season; the Hawkeyes had three two-hitters during the 2015 season.
? Iowa’s John Barrett and Illinois’ Cody Sedlock were high school teammates at Rock Island Alleman High School.
? The Hawkeyes have a +45 run differential this season. Iowa is 10-1 when scoring at least six runs and 0-9 when scoring 0-2 runs.

ILLINOIS NOTABLES
? The Fighting Illini are 12-14 overall and 3-3 in Big Ten Conference play. Illinois won two of three games over Penn State to open league action before dropping two of three games at Nebraska last weekend. It was the team’s first Big Ten series loss since 2014.
? Illinois won the opening game in Lincoln, 6-4, before falling 9-8 and 9-7 in games two and three. The Illini led 7-4 in the eighth in game two before the Huskers rallied for the win.
? Iowa and Illinois have played three common nonconference opponents in Northern Illinois, Southern Illinois, and Indiana State. Iowa is 2-3 against the trio; Illinois is 1-4.
? The Fighting Illini are hitting .253 as a team and averaging 4.8 runs per game. Two regulars — Jason Goldstein and Dan Rowbottom — are hitting above .300. Goldstein is hitting .347 with 14 RBIs, while Rowbotton is hitting .300 with 7 runs scored. Anthony Drago has team-highs in home runs (four) and RBIs (16), while Doran Turchan has a team-best 19 runs scored.
? Illinois has a 4.18 team ERA, allowing 131 runs (105 earned) in 226 innings. The staff has given up 233 hits and has 189 strikeouts to 77 walks on the year.
? Junior RHP Cody Sedlock (4-1, 3.50 ERA) will start Friday, redshirt sophomore LHP Doug Hayes (3-2, 3.14 ERA) will take the ball Saturday, and freshman RHP Cole Bellair (0-1, 2.48 ERA) will start Sunday.
? Sedlock, one of the top pitching prospects in the conference, leads the Big Ten in strikeouts (52)and strikeouts looking (16).

SERIES RECORD
? The Fighting Illini lead the all-time series over Iowa, 125-82-2. The first meeting came in 1895.
? In a scheduling oddity, Iowa and Illinois have only played two series since 2010 with both series being contested in Iowa City. Iowa won 2-of-3 games in 2010, while the Illini swept a three-game series in 2014.

GALLAGHER JOINS ROTATION
Sophomore Nick Gallagher will make his first career Big Ten start in the series finale against Illinois. The right-hander started the Hawkeyes’ second game of the season at Dallas Baptist where he was tagged with the loss, allowing five runs (four earned) in 1 1/3 innings. Gallagher is 1-0 with a 1.69 ERA in two Big Ten appearances, allowing two runs on seven hits over 10 2/3 innings.
? He earned is first Big Ten victory (third win overall) against Maryland on March 26, scattering two hits and fanning four in four innings.

HE’S A FRESHMAN?
After getting off to a slow start to his freshman season, Robert Neustrom has adjusted well to Division I baseball. The Sioux City, Iowa native is hitting .322 with 10 runs and nine RBIs. All nine RBIs have come in the team’s last 14 games.
? The Sioux City, Iowa native is leading the Hawkeyes with a .444 (8-of-18) average in Big Ten play, which ranks eighth in the league. He has three RBIs and three runs scored.
? Neustrom has five multi-hit games this season, including three three-hit contests. He is tied for fourth on the team with four multi-RBI games.
? Against Northern Illinois, Neustrom connected on his first career home run — a two-run shot into the wind to right field and finished 2-for-3 with two runs and a career-high four RBIs.
? The outfielder is hitting .323 (10-of-31) — second-best on the team — with eight RBIs and six runs scored over his last 10 games. He has reached safely in seven straight games — a career-best.

PITCHING EMERGES
Iowa’s pitching staff emerged in the Big Ten series-opening victory over Maryland. The Hawkeyes limited the Terrapins to six runs over 27 innings, posting a 2.00 ERA and striking out 23 to seven walks. Maryland hit .221 in the three-game series.
? The Hawkeye pitching staff has posted a 3.29 team ERA in six Big Ten games. Iowa has only used eight pitchers in Big Ten action.
? Iowa has allowed 105 runs (89 earned) in 26 games. The figures are fourth-best in the Big Ten.

SEE YA LATER
The Hawkeyes hit four home runs in their 12-3 victory over Northern Illinois on March 29 at Duane Banks Field. It was the team’s first four home run game since 2010 — a 16-6 victory over Coe College. Senior Tyler Peyton hit a grand slam in Iowa’s eight-run sixth inning. It was Iowa’s first grand slam since Blake Hickman hit one at Austin Peay in Rick Heller‘s second game as Iowa’s head coach.

BIG TEN HONORS
? Zach Daniels earned Big Ten Freshman of the Week honors on March 14 after hitting .571 with five RBIs and three runs scored in two Iowa victories. He had four RBIs in a 28-0 win over Northwestern College and went 3-for-4 with two runs and an RBI in a win over Savannah State.
? Robert Neustrom was honored as the Big Ten Freshman of the Week on March 28 after hitting .500 in helping Iowa to a 3-1 record last week. Neustrom had hits in three of four games, including two multi-hit contests, and posted a .667 slugging and .462 on-base percentage.
? It is the first time Iowa has had two different players earn the freshman honoree in the same season.

BOOKER’S BREAKOUT
Senior Joel Booker is doing his part to be the catalyst at the top of the Hawkeye lineup. In his first season as Iowa’s leadoff hitter, the Columbus, North Carolina, native is having a breakout season.
? The outfielder is hitting a team-best .358 with 39 hits and 24 runs scored. He has nine doubles, two triples, and three home runs — surpassing his is extra base hit output from his junior season.
? Booker is second on the team with 10 multi-hit games, including four three-hit contests.
? He had a career-best 14-game hitting streak and reached safely in 18 consecutive games earlier this season. He has hit safely in 20-of-26 games and reached safely in all but two contests.
? Booker has posted career-bests in hits (4 vs. Chicago State), RBIs (4 vs. Savannah State), and tied a career-high in runs (3 at Missouri State) this season.
? He is hitting .372 (16-of-43) with 12 runs and six extra base hits over his last 10 games.

THINGS ARE “ROSEY”
After hitting .391 in Big Ten play as a junior, senior Nick Roscetti has started 2016 where he left off.
? Roscetti has a team-best 12 multi-hit games and six multi-RBI contests. He had a career-best 15-game hitting streak from Feb. 26-March 22.
? He has six games with two or more RBIs, including a four-RBI performance, tying a career-high, in Iowa’s 7-6 walk-off victory over Bradley on March 22. Roscetti had the game-winning RBI single in the bottom of the ninth inning.

OFFENSIVE NOTES
? Senior Jimmy Frankos has started five of six games in Big Ten play behind the plate. He is hitting .313 with two RBIs, collecting five hits in 16 at-bats.
? Sophomore Austin Guzzo has started 19 games, primarily as Iowa’s DH. He hit a three-run home run at Minnesota — his team-leading third long ball of the season. Guzzo is hitting .273 with 13 runs and 15 RBIs.
? Guzzo scored five runs against Northwestern College to tie a school record. He is one of three players to score five runs in a game and the first since John Mahoney in 1978.

SOPHOMORE C.J. Eldred…
? has been Iowa’s most consistent pitcher, going 2-3 with a 2.51 ERA in seven appearances (six starts). He took over as Iowa’s Friday night starter on March 4 at Southern Illinois.
? has 31 strikeouts to 12 walks in 46 2/3 innings — third-most innings in the Big Ten — and is limiting opposing batters to a .218 batting average.
? has a team-best three quality starts. He has allowed one run or fewer in three of his five starts.
? pitched back-to-back complete games against Maryland and at Minnesota.
? pitched his first career complete game against the Terps, allowing one run on six hits and striking out nine to out duel Maryland All-American Mike Shawaryn. He went eight innings at Minnesota, allowing four runs on seven hits in a 4-1 loss.
? posted back-to-back quality starts against Southern Illinois and Omaha… threw nine innings of two-hit, one run ball against the SIU. He had a no-hitter through 7 2/3 innings, but wasn’t involved in the decision. He allowed three runs in six innings in a 3-2 loss to Omaha.
? picked up his first career win against Dartmouth in his first career start, allowing one run on four hits over five innings, fanning five.
? sat out the 2015 season after transferring from Indiana University, where he redshirted in 2014.
? is the son of former Hawkeye first round MLB Draft pick and Major Leaguer Cal Eldred.

SENIOR Tyler Peyton…
? Earned his first victory of the season at Minnesota on April 3, allowing one run on five hits over five innings.
? logged a quality start at Dallas Baptist, going 6 1/3 innings, scattering two hits, and striking out six. Both runs were unearned, as he took the loss.
? had his best outing since the series opener in game two against Maryland. He pitched five innings, allowing one run on three hits and struck out seven, but wasn’t involved in the decision.
? missed a start at Southern Illinois due to forearm tightness.
? is 13-8 in his Iowa career with a 3.96 ERA in 36 starts. Peyton has 15 quality starts and has pitched into the seventh inning 14 times in his career.
? has logged 200 innings in two-plus seasons, where he has 144 strikeouts to 67 walks.
? earned third-team All-America honors by D1Baseball.com and the USBWA as a junior.
? has the best change-up in the Big Ten Conference according to Baseball America.

IN RELIEF…
? Iowa’s bullpen has been strong, posting a 2.61 ERA. The Hawkeye relievers have allowed 44 runs (34 earned) in 117 1/3 innings and are holding opposing hitters to a .239 average.
? Redshirt junior Ryan Erickson has looked like the Erickson of 2015 during his last four appearances. the southpaw has a 1.64 ERA over his last 11 innings pitched, allowing two runs on nine hits with six strikeouts.
? Redshirt junior Josh Martsching is 1-0 with one save and a 1.35 ERA in five appearances. He has allowed one run on five hits in 6 2/3 innings.