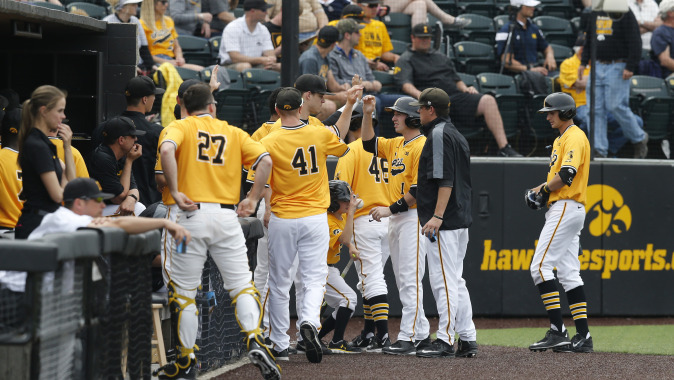 THIS WEEK
The University of Iowa baseball team steps out of Big Ten Conference play when it welcomes Kansas State to Duane Banks Field for a three-game weekend series from April 29 through May 1. Friday’s opener begins at 6:05 p.m. (CT), Saturday starts at 2:05 p.m., and Sunday’s finale at 1 p.m.

GAME COVERAGE
? The first two games of the series will be streamed lived on BTN Plus. The series finale will be available on Hawkeye All-Access.
? Friday’s series opener will be broadcast on the radio on AM-800 KXIC, and all three games of the weekend series will be audio streamed on Hawkeye All-Access with Brent Balbinot and Steve Duncan on the call.
? Live statistics will be available at www.hawkeyesports.com and fans can follow the action via Twitter/UIBaseball.

SERIES PROMOTIONS
? Friday will be baseball bingo at Duane Banks Field, while Saturday is “Student Day” and the “Make a Wish Game.”
? Sunday is Be Bold, Wear Gold with the first 250 fans receiving a free gold replica jersey t-shirt.

IOWA TIDBITS
? Iowa has won 10 of its last 14 Big Ten Conference series dating back to the start of the 2015 season. The Hawkeyes suffered their first home series loss since 2014 when it dropped 2-of-3 games against No. 18/21 Michigan.
? Three players — Joel Booker, Nick Roscetti, and Mason McCoy — have started every game this season.
? Iowa has 23 home runs in 38 games — the sixth-most in the Big Ten — this season with nine different players hitting at least one home run. Seniors Joel Booker and Tyler Peyton have a team-high four home runs, while three Hawkeyes have three apiece.
? Senior Joel Booker is 15-of-16 on the base paths this season. The outfielder has been successful in 11 straight attempts; he hasn’t been caught stealing since March 12 against Seton Hall.
? The Hawkeyes have a +52 run differential this season. Iowa is 14-2 when scoring at least six runs and 0-11 when scoring 0-2 runs.
? Iowa is 4-10 against left-handed starting pitching.
? Iowa is 14-1 when leading after six innings, 15-1 after seven, and 16-0 after eight innings. The Hawkeyes are 4-16 when trailing after six, 3-16 after seven, and 1-18 after eight.

SERIES RECORD
Kansas State leads the all-time series over Iowa, 13-7. The Wildcats have won the last six meetings in the series since the 2013 season, including a 5-4 victory in the season-opener last season in Florida.
Iowa’s last victory came in 2013, winning the series opener, 6-1, at Banks Field.

THE REAL MCCOY
Junior Mason McCoy hit Iowa’s first cycle since 2007 when he finished 5-for-7 with three runs and six RBIs in a 22-2 victory over Air Force on April 13. The third baseman had a bunt single in the first, an RBI triple in the second, an RBI double in the fourth, and a two-run home run in the sixth. He added a two-run double in the seventh to tie the program record for hits in a game.
? Jason White was the last Hawkeye to hit for the cycle on April 22, 2007, against Illinois. That was 3,276 days and 479 games ago.
? McCoy is the second documented player to hit for the cycle in program history and the first by a Big Ten player since 2013 (Justin Parr, Illinois).
? McCoy became the 16th player to tally a five-hit game and the first since Eric Toole in 2013 at Purdue.

HOME COOKIN’
The Hawkeyes are hitting .299 in 16 home games and average 8.5 runs per contest. Five regulars and nine total players are hitting over .300 with senior Daniel Aaron Moriel posting a team-best .375 average with 14 RBIs. Iowa’s pitching staff has a 3.40 ERA over 143 innings at home with 132 strikeouts to 53 walks.

ROSCETTI NAMED TO BROOKS WALLACE WATCH LIST
Senior Nick Roscetti has been named to the Brooks Wallace Shortstop of the Year Award Watch List. He is one of three players from the Big Ten and 54 players nationally named to the initial list. The Illinois native is hitting .331 with 31runs and 25 RBIs in 2016.

20-PLUS RUNS
Iowa scored 22 runs on 16 hits in its 22-2 victory over Air Force on April 12 to complete the two-game series sweep. It was the team’s second 20+ run game this season as the Hawkeyes scored 28 runs — the second-most in program history — in a 28-0, seven-inning win over Northwestern College on March 8. It is the first time since 1996 Iowa has had two 20-run games in a season.

6 X 2
Iowa had two players finish with six RBIs in its 22-2 rout of Air Force on April 13. Junior Mason McCoy finished 5-for-7 with three runs and six RBIs, while senior Daniel Aaron Moriel was 3-for-5 with four runs and six RBIs. Moriel had career-highs in runs and RBIs, and tied a career-best in hits. McCoy had career-best numbers across the board.
? It was Iowa’s first six RBI game since 2010 — Mike McQuillan (vs. Illinois State, 2/20/10). The school record for RBIs in a game is 10 by Brian Wujcik.

JOINING HISTORY
? Freshman Mitchell Boe tied a school record, drawing four walks in against Air Force on April 13.
? Sophomore Austin Guzzo scored five runs against Northwestern College on March 8 to tie a school record. He is one of three players to score five runs in a game and the first since John Mahoney in 1978.

GALLAGHER IN RELIEF
Sophomore Nick Gallagher notched his team-leading fifth victory — tied for the sixth most in the Big Ten — of the season in Iowa’s 8-3 win over No. 18/21 Michigan on April 24. The right-hander threw six shutout innings before surrendering his only run in the ninth. He fanned a career-high seven batters and scattered six hits over seven innings.
? The Iowa City, Iowa, native has been superb in relief this season. He is 4-1 with a 1.60 ERA over 33 1/3 innings. He has 31 strikeouts to nine walks.
? In Big Ten play, Gallagher is 3-0 with a 2.70 ERA in five appearances. He has 22 strikeouts in 26 2/3 innings.

BALLS & STRIKES
? Three Iowa pitchers — Cole McDonald, Tyler Radtke, and Zach Daniels — combined to shut out Grand View, 3-0, on April 26. It was the team’s second shutout of the season.
? McDonald earned his fourth win, tossing a career-high five innings and fanning five. The New Hampton, Iowa, native has emerged as Iowa’s midweek starter, going 4-1 with a 1.86 ERA in eight appearances (six starts). He has 21 strikeouts to four walks in 19 1/3 innings.
? Freshman Zach Daniels is 1-1 with a 2.38 ERA with 12 strikeouts to three walks in 11 1/3 innings. The right-hander has saves in each of Iowa’s last two victories and hasn’t allowed a run in 4 2/3 innings since March 29.

BOOKER’S BREAKOUT
Senior outfielder Joel Booker is hitting a team-best .344 with 56 hits, 33 runs and 25 RBIs. He had a team-best 13 doubles, two triples, and four home runs — surpassing his is extra base hit output from his entire junior season.
? After being Iowa’s leadoff hitter for a majority of the season, Booker has slid down to the No. 3 spot in the lineup. He is 7-of-15 (.467) with four RBIs since making the move.
? Booker is second on the team with 16 multi-hit games, including five three-hit and three four-hit contests. He went 4-for-5 with two RBIs and a run scored in the series finale against No. 18/21 Michigan.
? He had a career-best 14-game hitting streak and reached safely in 18 consecutive games earlier this season. He has hit safely in 30-of-38 games and reached safely in all but four contests.
? Booker has posted single-game career-bests in hits, RBIs, and runs this season. He drove in all four runs and hit his fourth home run — a three-run shot — in Iowa’s 4-3 series-clinching victory over Illinois.

THINGS ARE “ROSEY”
? Senior Nick Roscetti has a team-best 19 multi-hit games and seven multi-RBI contests. He had a career-best 15-game hitting streak from Feb. 26-March 22.
? The shortstop has five multi-hit games in his last six contests and has hit safely in 10 of the last 12 games. He is hitting .365 with five RBIs and 11 runs scored during the stretch.
? The shortstop has seven games with two or more RBIs, including a four-RBI performance, tying a career-high, in Iowa’s 7-6 walk-off victory over Bradley on March 22. Roscetti had the game-winning RBI single in the bottom of the ninth inning.
? Roscetti posted his second four-hit game of the season, tying a career-high, in the series finale at Indiana. He scored the game-winning run in the 10th inning in a 6-5 win.
? The Illinois native ranks is tied for 11th in the Big Ten in hits (53) and is tied for 15th in batting average (.331).

OFFENSIVE NOTES
? Senior Tyler Peyton is hitting a team-best .417 over his last 10 games with six multi-hit games. The first baseman has seen his batting average climb to a season-best .292 — third-best on the team. In Big Ten play, Peyton is second on the team with a .300 average with nine RBIs and nine runs scored.
? Senior John Barrett has started seven of the last eight games, where he is hitting .333 (6-of-18) with three RBIs. The Moline, Illinois, native has two multi-hit games — the first two of his career — since April 9.
? Senior Joel Booker is hitting a team-best .412 with runnings in scoring position and .714 with a runner on third with less than two outs. He has a team-best 14 two-out RBIs.
? Senior Eric Schenck-Joblinske had the game-winning RBI single in the 10th inning in Iowa’s come-from-behind, extra-inning victory April 17 at Indiana. Schenck-Joblinske was 1-for-3 with two RBIs — his second two-RBI game this season.

SOPHOMORE C.J. Eldred…
? has been Iowa’s most consistent pitcher, going 2-5 with a 3.05 ERA in 10 appearances (nine starts). He took over as Iowa’s Friday night starter on March 4 at Southern Illinois. Eldred’s ERA ranks 14th in the Big Ten.
? has 46 strikeouts to 15 walks in 65 innings — the sixth-most innings and 13th-most strikeouts in the Big Ten — and is limiting opposing batters to a .250 batting average.
? has a team-best five quality starts, three coming in Big Ten play. He has allowed three runs or fewer in seven of his nine starts and he has gone at least seven innings in four starts.
? pitched back-to-back complete games against Maryland and at Minnesota — the first Hawkeye to accomplish the feat since 2011.
? pitched his first career complete game against the Terps, allowing one run on six hits and striking out nine to out duel Maryland All-American Mike Shawaryn. He went eight innings at Minnesota, allowing four runs on seven hits in a 4-1 loss.
? posted back-to-back quality starts against Southern Illinois and Omaha… threw nine innings of two-hit, one run ball against the SIU. He had a no-hitter through 7 2/3 innings, but wasn’t involved in the decision. He allowed three runs in six innings in a 3-2 loss to Omaha.
? picked up his first career win against Dartmouth in his first career start, allowing one run on four hits over five innings, fanning five.
? sat out the 2015 season after transferring from Indiana University, where he redshirted in 2014.
? is the son of former Hawkeye first round MLB Draft pick and Major Leaguer Cal Eldred.

SENIOR Tyler Peyton…
? Isn’t expected to pitch after being spiked on his throwing arm in the series finale against Michigan.
? Earned his first victory of the season at Minnesota on April 3, allowing one run on five hits over five innings.
? logged a quality start at Dallas Baptist, going 6 1/3 innings, scattering two hits, and striking out six. Both runs were unearned, as he took the loss.
? had his best outing since the series opener in game two against Maryland. He pitched five innings, allowing one run on three hits and struck out seven, but wasn’t involved in the decision.
? is 13-10 in his Iowa career with a 4.43 ERA in 38 starts. Peyton has 15 quality starts and has pitched into the seventh inning 14 times in his career.
? has logged 207 innings in two-plus seasons, where he has 150 strikeouts to 71 walks.
? earned third-team All-America honors by D1Baseball.com and the USBWA as a junior.
? has the best change-up in the Big Ten Conference according to Baseball America.

IN RELIEF…
Iowa’s relief corps has been a strength of the 2016 pitching staff. The Hawkeye relievers have posted a 3.08 ERA over 172 1/3 innings and have 148 strikeouts. Opponents are hitting .235 against the relievers.
? Redshirt junior Josh Martsching as emerged as a closer. He is 1-0 with a 1.74 ERA in eight appearance, fanning eight in 10 1/3 innings. The Bloomfield, Iowa, native is tied for the team-high with three saves.