IOWA CITY, Iowa — Marissa Mueller is driven by the notion that she knows very little.

Those are her words. Socrates beat her to that line more than 2,000 years ago when he said, “The only true wisdom is in knowing you know nothing.”

Mueller concurs. The University of Iowa junior’s grade-point average, which is above 4.0 on a 4.0 scale, suggests otherwise. But the idea of being a speck of dust in a galaxy of knowledge sharpens Mueller’s mental pencil. Her educational mission is to be a knowledge-sponge.

“The biggest thing I have learned at Iowa is how little I know,” said Mueller, who is pursuing a degree in biomedical engineering/pre-medicine. “There is so much out there and every day I get a new sense of respect for all those people with so much expertise in their fields. It is the same in athletics and academics.”

Mueller, a native of Petrolia, Ontario, Canada, is also a member of the Hawkeye track and field program where she throws javelin. On April 22, she became one of two University of Iowa undergraduate students to receive a Hancher-Finkbine Medallion and is thought to be the first female student-athlete to receive the award in school history.

The Hancher-Finkbine Medallion, established in 1964, acknowledges four students, one professor, one staff member, and one alumnus each year. It is the pinnacle campus-wide award recognizing learning, leadership, and loyalty.

“I’m very honored and humbled,” Mueller said. “Thanks goes to my coaches, the Honors Program, Iowa Center for Research by Undergraduates, Department of Biomedical Engineering, and my research mentor, Dr. Laura Frey-Law.” 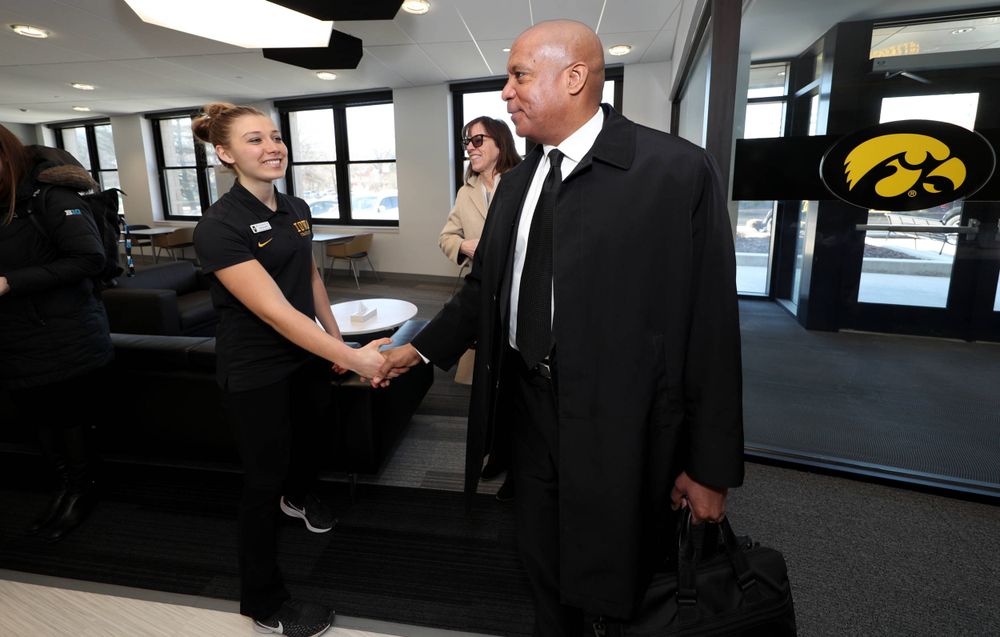 Drake was preparing to travel to Athens, Georgia, to compete in her first NCAA Championships. The week before she was set to depart, things at the national level started going downhill.

“I was on the phone with my mom,” said Drake. “We were talking about (how the tournaments got canceled) and she had the news on when a reporter announced it on television. I was on my way to get dinner and I broke down.”

Drake’s season was over because of the coronavirus pandemic.

“I had no idea how big it was going to get and how fast everything was going to shut down,” said Drake. “I was devastated, and the next couple of days I was trying to get over the news and come to terms with it.

“Even though I knew it was for the better and it was what needed to happen, it is hard to know that I worked so hard for this and it was taken away.”

Mueller had an idea she was nominated for a Hancher-Finkbine Medallion after speaking at a Faculty Senate meeting in the Old Capitol Building in December. Mueller and University of Iowa men’s tennis player Jason Kerst briefed the group on student-athlete graduation rates and explained how thankful they are for a job well done by Student-Athlete Academic Services.

Once Mueller and Kerst opened for questions from the floor, she recognized several engineering professors.

One of her favorites, Dr. David Wilder, spoke.

“He looked right at me and said, ‘The hallmark of a good engineer is to be able to explain highly technical concepts in simplified terms,” Mueller recalls Wilder saying. “As an aspiring engineer, I want you to explain the bio-mechanics behind the javelin throw.’”

In hindsight, Mueller wished she would have used a really simplified term, Grip and Rip. Instead, after gathering herself, she quoted a Princeton study and followed that by physically demonstrating how to throw a javelin, complete with mock run-up.

Mueller’s response was well-received, and she accepted many kudos from faculty. A week passed and she was summoned to Wilder’s office.

“He said they wanted to nominate me for the Hancher-Finkbine Medallion,” Mueller said. “He was very deliberate when he asked that question (in the Old Capitol Building). There was a message behind it, and I was completely shocked.” 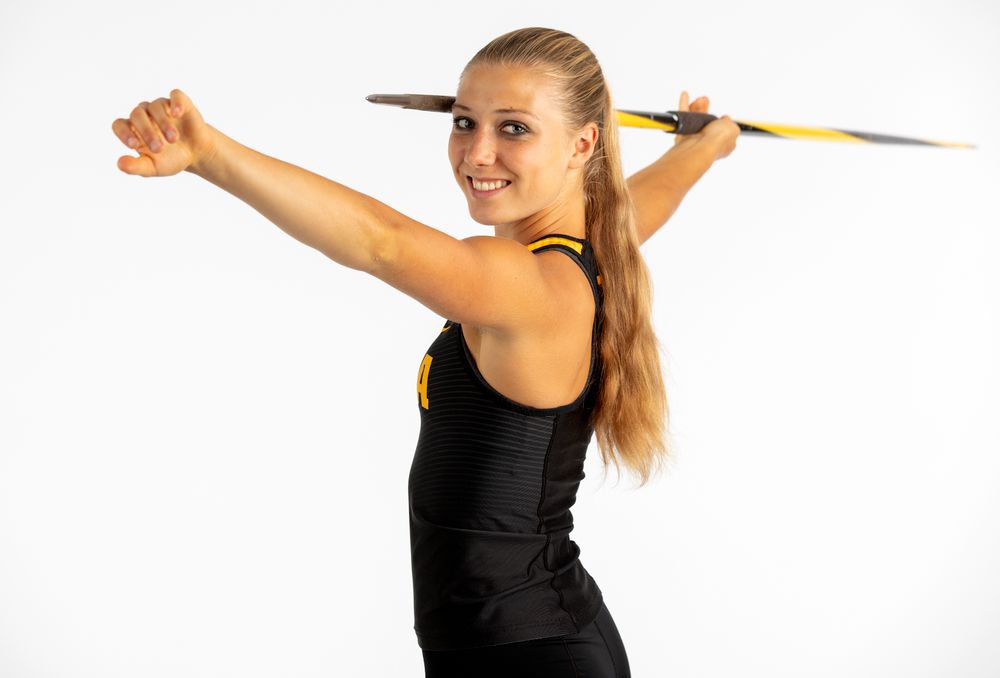 You ought to give Iowa a try

The roots to why and how Mueller ended up at the University of Iowa were planted when she was 9 or 10 years old. She just didn’t realize it at the time.

The local high school was performing The Music Man, written by Meredith Willson, who was born in Mason City, Iowa. The cast for the musical required an elementary student to play Windthrop, and Mueller got the part. Her only line was:

“I thought nothing of it at the time,” Mueller said.

Until she came to Iowa City on a recruiting visit.

A fluke, but the best kind of fluke

Mueller received a recruiting pitch from Andrew Dubs, Iowa’s throws coach at the time. She looked for Iowa on a map, studied up on the NCAA and Big Ten Conference, and set a date to visit.

A surgeon friend of Mueller’s father, Peter, had a connection to a surgeon in Iowa. She was blown away by Iowa’s engineering program and was amazed by the collaborations between the university and the University of Iowa Hospitals and Clinics.

And did she notice Hawkeye pride. On her official visit, Mueller attended a football game and heard a Go Hawks! cheer. It was what she called a “light bulb-went-on-moment.”

“Oh my gosh, this is Hawkeye Iowa they were talking about in The Music Man,” Mueller said. “It was really a fluke (how I got to Iowa), but the best type of fluke that could happen.”

“Oh my gosh, this is Hawkeye Iowa they were talking about in The Music Man. It was really a fluke (how I got to Iowa), but the best type of fluke that could happen.”

‘I was supposed to be at Iowa’

Like her quest for knowledge in the classroom, Mueller’s understanding of Hawkeye pride is ongoing.

“I still feel I don’t fully understand what that means, because it is something so special that you can’t describe unless you are here and experience it in person,” she said.

Mueller knows it sounds cliché, but after she toured campus, saw the athletic facilities, met director of track and field Joey Woody (who she says is “absolutely fantastic”), visited the Gerdin Learning Center…

“I knew I was supposed to be at Iowa,” she said.

The javelin is contested during the outdoor portion of the track and field season and the 2019 season for Mueller was cut short because of injury. She competed at the Big Ten Championships on May 10 in Iowa City and set a personal record by placing seventh with a throw of 47.02 meters (154-feet, 3-inches).

Mueller was healthy and feeling well this March as she completed a routine weight workout. Then there was a notification on a teammate’s watch: the outdoor season had been canceled because of the coronavirus pandemic.

“The whole weight room went quiet. It was like a giant rock had been thrown at all of us and I felt a lump sink into my chest,” Mueller said. “We finished the workout, but it was the weirdest workout I have ever experienced.

“It lights a fire under you to get ready for senior season (in 2021) more than ever.” 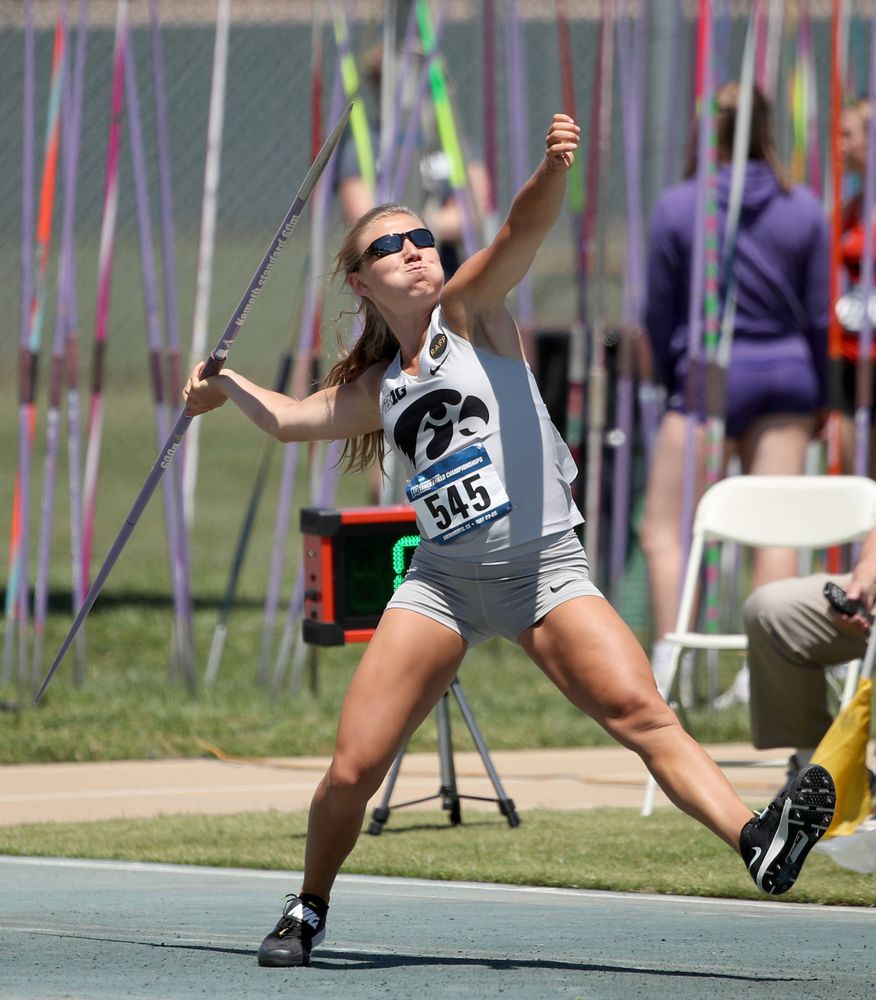 As the Hancher-Finkbine Medallion indicates, Mueller is much more than a javelin thrower. She has scaled back her academic workload for the next two semesters because she was supposed to be competing in track and field this spring and when time permits, studying for the Medical College Admission Test.

Mueller wants to enroll in an MD-PhD program where she could eventually earn both a PhD and a medical degree. She finished application letters April 27.

“It is a lot of time, but I love the research and I love the medicine side of things,” said Mueller, who would like to be a physician scientist. “I can’t see myself doing one without the other. Once I get into medical school, I will be exposed to areas I have never heard of. Right now, I like cardiology, neuroscience, orthopedics, and sports medicine.”

Mueller is not in a rush to pin down a medical specialty, she won’t know for certain until she has completed a couple years of medical school. Until then, Mueller will continue in the role of a knowledge-sponge that has served her well as a student-athlete at the University of Iowa.

A student-athlete who is driven by the fact she knows very little.