Heart of the Hawkeyes: Pierce Family

IOWA CITY, Iowa — The Hawkeyes have the Hawk Walk, the Pierce family has the Pierce Walk. Both pregame rituals celebrate a former University of Iowa football player. Both walks are emotional.

Prior to every home football game, Iowa’s football staff and student-athletes depart a bus and before entering the stadium from the south, touch the helmet at the base of a 20-foot bronze statue of Nile Kinnick, the University of Iowa’s only Heisman Trophy winner.

The Pierce family enters Kinnick Stadium from the southeast. Before taking their seats, members of the group touch a plaque commemorating the 1956 Hawkeyes, who won the 1957 Rose Bowl with a 35-19 win over Oregon State. A member of that team was center/linebacker/husband/father Charles “Chuck” Pierce, who passed away in 2014.

“After my father passed away, it is kind of a memory and a tribute,” said Greg Pierce, the second of five sons born to Chuck and Kay. “Typically what happens is my brothers and my mom share our tickets and other relatives buy tickets off the web site. On our way in, we always go through that gate where those plaques are, it is a recognition thing for us. When we touch the plaque, it tugs on the heartstrings a little bit.”

Two of the Pierce boys, Scott and Greg, were born while Chuck was a student-athlete for Forest Evashevski from 1954-57. They lived west of the football stadium, but for Kay’s sake, please, please do not use the Q word.

“They might have been known as Quonset huts, but mom gets upset and says they were nice little houses,” Greg said. “Mom would take us to the edge of the housing area where the train comes by and we would watch the trains when we were little kids.”

The Pierces are a family of Hawkeyes and it started with Chuck. He grew up in DeKalb, Illinois, and enlisted in the Marine Corps in 1951. In 1953, Chuck played in the All-Marine Corps Championship football game against the Quantico Marines, who were quarterbacked by Hayden Fry. 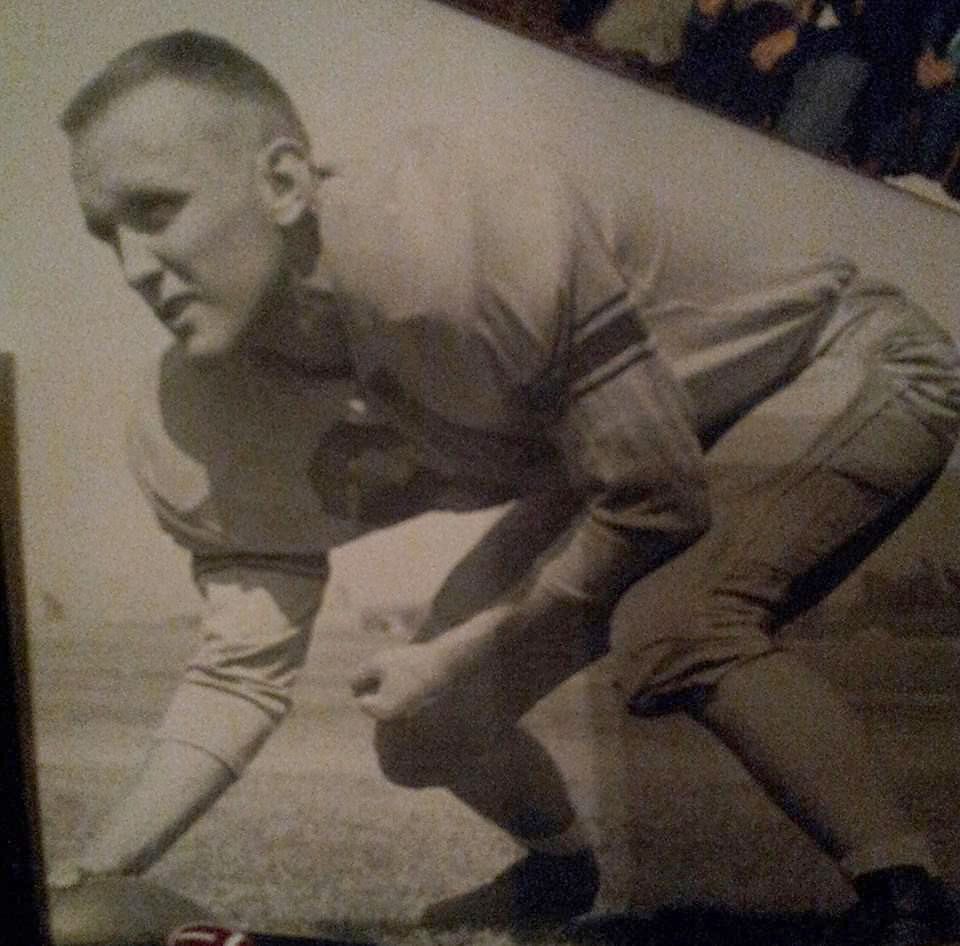 “After my father passed away, it is kind of a memory and a tribute. On our way in, we always go through that gate where those plaques are, it is a recognition thing for us. When we touch the plaque, it tugs on the heartstrings a little bit.”

Chuck and Kay were married in 1953, and after being honorably discharged in 1954, Chuck enrolled at the University of Iowa.

“We have a lot of Iowa stories,” Greg said.

Many Hawkeye-themed tales still make the rounds at Pierce gatherings. One is the joke that Greg is always late. During the 1955 season, Chuck told Evy that he didn’t think he should go on a road trip to Notre Dame on Nov. 19 because his wife could deliver any day. Greg was born Dec. 12, 1955 — 23 days later.

“Mom always tells me I was late my entire life, including when I was born,” Greg said. “Dad got a hard time about staying back from that game.”

Kay tells the account of when Chuck (she refers to him by Vernon, his middle name) was playing and Iowa won big games, fans came onto the field and tore down the goal posts. They carried it off, too, sometimes as far as downtown.

“She has all this memorabilia from back in the day,” Greg said. “She has chips of wood from championship goal posts that were torn down, so it’s pretty cool.”

A fantastic cook, Kay has written a book that includes several recipes the family feasts upon at tailgate parties. But Kay is much more than a cook; she is a football junkie with a high football IQ. That fact wasn’t lost on girlfriends the Pierce boys brought to the house over the years.

“Mom knew more about football than anybody I knew,” Greg said. “If we were watching a game, (the girlfriends) would always say, ‘I can’t believe how much your mom knows about football.’ I said, my mom is football.”

Greg and several family members were part of their own postgame field storming. It followed a 33-yard field goal by Keith Duncan that gave the Hawkeyes a 14-13 win over No. 3 Michigan on Nov. 12, 2016.

“We were sitting in our typical seats and we look at each other like, do we rush the field or what?” Greg said. “We had never rushed the field before and we’re not kids by any means, so we looked at each other and said, yep, we’re going. When we were down there we were like, don’t get hurt. Mom will kill us if we get hurt rushing the field.”

After Chuck graduated from Iowa, the Pierce family moved to Kay’s hometown of Sycamore, Illinois. That was also once home for the Niemann family that includes current Iowa assistant coach Jay and linebackers Ben and Nick. After college, Chuck began a 40-year career in the savings and loan business.

The Pierces returned to Iowa in 1976, living in Mason City. Kay currently resides in Johnston. Kay is 86, and even though she couldn’t attend games in Kinnick Stadium this season, she was in the middle of family Zoom calls or text chats before, during and after Hawkeye games.

“She is still a huge fan and loves to be part of the whole thing,” Greg said. “If she isn’t at the game, she is for sure watching the game.”

Although difficult to find, the family has occasionally watched reel-to-reel footage of their father during his playing days as a Hawkeye. One of their favorite scenes was documented days before the 1957 Rose Bowl when wives and fans arrived by train in Pasadena, California.

“There is video out there and it shows my dad meeting mom when the train got there,” Greg said. Then there is a pause while he regains his composure. “It’s pretty cool.”

Cool and emotional. Just like the Pierce Walk on home football Saturdays.