ST. LOUIS — For a big guy, Tony Cassioppi has hops when it comes to climbing a wrestling podium.

His vertical leap didn’t reach as high as he wanted when the NCAA Championships began Thursday at Enterprise Center, but a successful switch to “get-what’s-next” mode led the University of Iowa wrestling team to its 24th team championship. In all, four Hawkeye wrestlers combined to go 6-1 in the sixth session Saturday, giving Iowa 125 points heading into the finals. That’s too big of a gap for contenders Penn State and Oklahoma State to overcome.

Throw out the loss to Steveson, and Cassioppi went 5-0 at his first NCAA Championships with three major decisions, while outscoring his opponents, 37-2. For his career, Cassioppi improved to 33-6. 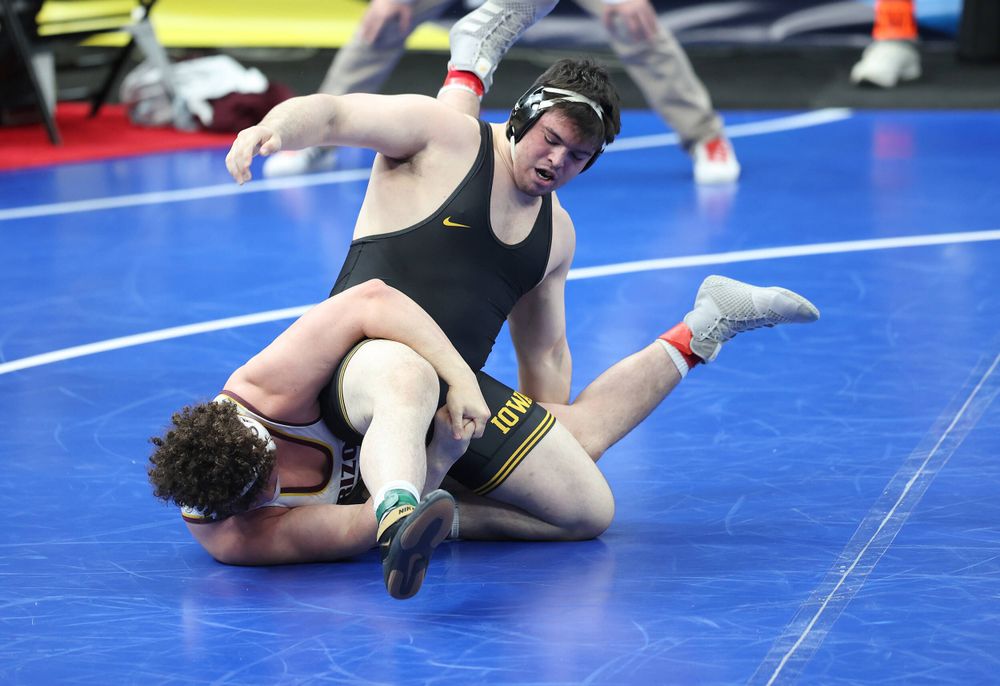 “I don’t want to be third place, I want to be first place, but after that loss (to Minnesota’s Gable Steveson) in the semis (Friday evening), I had to refocus on getting the next best thing and climbing that podium.”

The heavyweight division at the Big Ten and national level is alive and well, and Cassioppi’s name is worthy of mention in the top tier with Steveson and Michigan’s Mason Parris, who will wrestle in the NCAA final. Cassioppi wants to join the NCAA finals party.

“Wrestling Steveson, he made me look kind of slow and maybe clumsy,” Cassioppi said of a 16-6 loss. “It was kind of embarrassing to be honest, and I don’t like to be embarrassed. That’s fire in me and I’m going to work and work and work until I’m putting it to everybody in the world.”

After the setback in the semifinals, Cassioppi went 2-0 on Saturday and outscored Wisconsin’s Trent Hillger and Schultz, 13-0.

Cassioppi was the final Hawkeye to take the mat in Session VI, but he was far from a one-man wrecking crew. Austin DeSanto (133), Kaleb Young (157), Jacob Warner (197) and Cassioppi combined to win six matches (two by bonus points) to secure the team championship.

DeSanto, Young, Warner and Cassioppi did that Saturday morning. In the process, they brought a team title with them.

“Our team came out and faced some adversity, but to still pull it out and to be scoring as many points as we are and to be wrestling as hard as we are is awesome,” Cassioppi said.

Iowa looks to widen the gap in the team standings when the finals begin at 6 p.m. (CT). The evening kicks off at 133 pounds and the Hawkeyes are represented at 141 (Jaydin Eierman), 174 (Michael Kemerer) and 125 (Spencer Lee).