IOWA CITY, Iowa — The No. 37 University of Iowa women’s tennis team defeated No. 28 Nebraska on Sunday, 4-2, inside the Hawkeye Recreation and Tennis Complex.

Samantha Mannix rallied from 5-1 down in the second set to clinch the fourth and match-winning point, giving Iowa its first win against a top 30 opponent since 2010. Mannix won the first set at No. 3 singles, 6-2, and rattled off six straight games in the second set to finish her match a 6-2, 7-5 winner.

“Once I got the 5-2 game I thought to myself, I’m winning 7-5,” said Mannix. “That was the only option at that point. There was one moment when I tied it up five-all and I knew I just needed to get the next two games and it was over.”

The win helped Iowa improve to 9-4 in the Big Ten and send its four seniors off the court for the final time with a win.

“It was amazing to put a W on the board,” said Mannix. “In year’s past we played senior day and lost the match and it didn’t feel good by any means, so it was nice to be able to 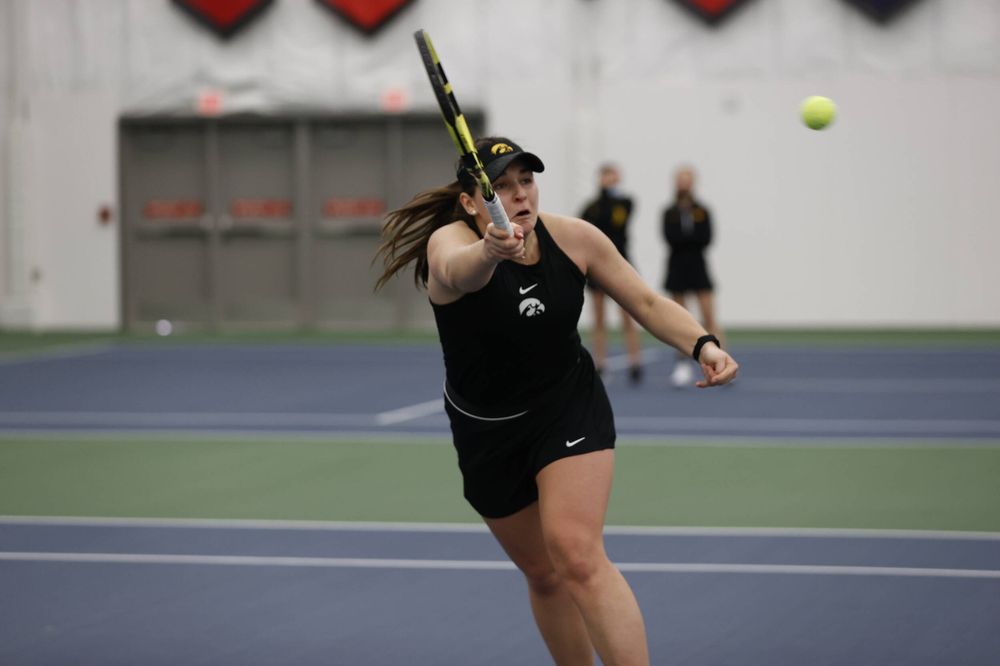 “You want to pay tribute to the seniors in every way possible and the best way is to get a quality win against a quality team. It really speaks about the direction of the team."

The Hawkeyes needed four singles wins after dropping two of three doubles matches. Senior Danielle Bauers left her home court a winner, teaming with Vipasha Mehra to win 6-4 at the No. 3 doubles position, but Nebraska closed with consecutive 6-4 wins at the No. 1 and No. 2 spots and led 1-0 heading into singles.

Senior Elise van Heuvelen, playing in her final match at the Hawkeye Tennis and Recreation Complex, got dialed in at No. 2 singles and tied the team score, 1-1, with a 6-4, 6-0 win.

“I wanted to finish out how I’ve been playing the last five years, and that’s an aggressive ball, using my forehand,” said van Heuvelen. “I got that (match) point and as soon as that ball was out the emotions flooded immediately. I knew that was the last ball I was ever going to hit here as a player. It’s very special and I’m very grateful for every opportunity I have had here. Today was the cherry on top.”

The Hawkeyes took a 2-1 lead with a 6-1, 6-3 win at No. 1 singles. Alexa Noel improved to 19-0 at the top spot, taking down No. 88 Kristina Novak. Nebraska countered with a win at No. 4 singles, but the Hawkeyes answered with a pair of wins just seconds within each other.

QUOTING @SASHASCHMID
“You want to pay tribute to the seniors in every way possible and the best way is to get a quality win against a quality team. It really speaks about the direction of the team. Their confidence is growing and we want to make this season go as long as possible. We know we have to keep growing and improving as the season goes on, and we still have ways to get better, that’s what is exciting about this team. The season in many ways has been about us learning to win as a team and beat other quality teams. You get to the point where you’re tired of being close and falling short so you have to get through it at some point. Today is a match we can build confidence from.”

Hawks Win! Mannix wins it at No. 3 pic.twitter.com/mVzSKcXjYS

NOTABLES
• The Hawkeyes won their ninth conference match of the season, tying for the most by a Hawkeye team since 2006 (9).
• The win was Iowa’s best against a ranked opponent since defeating No. 25 Ohio State in 2010.
• Iowa finished the year 7-2 at home and winners of three straight.
• Alex Noel is 19-0 with 17 wins in straight sets.
• Elise van Heuvelen Treadwell ranks fifth all-time in singles wins (89) and ties for third all-time with 170 doubles wins.

UP NEXT
The Hawkeyes are idle next week and return to action April 9 at Rutgers.