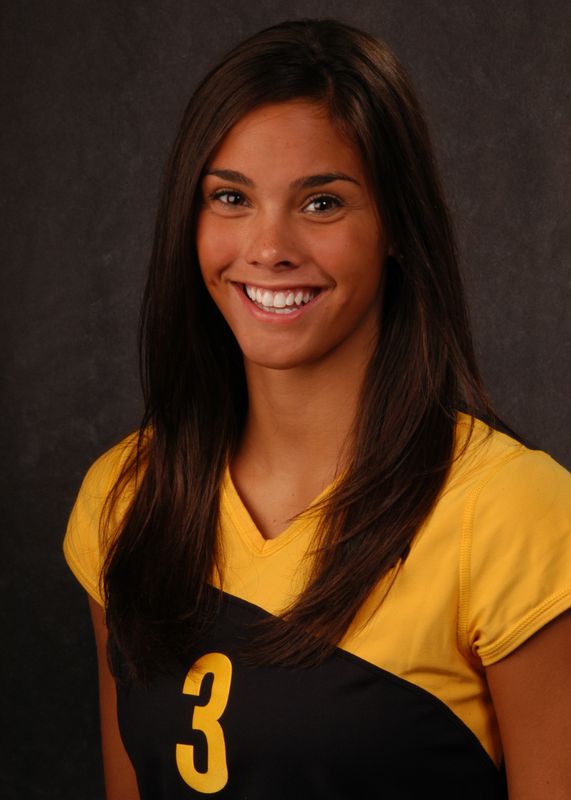 2008 as a Senior… ESPN the Magazine third team Academic all-District selection…academic all-Big Ten… started and played in all 32 matches and 116 sets… led team with 1,020 assists and 8.79 assists per set… finished seventh in the Big Ten in assists… named to named to Pioneer Classic all-tournament team… recorded six double-doubles in assists and digs…had 40 or more assists 10 times, including season-high 52 at Indiana (Oct. 31).

2007 as a Junior… Academic all-Big Ten… played in all 31 matches and 109 games, with 29 starts… led team with 918 assists and 8.42 assists per game… finished ninth in the Big Ten in assists… named to the Hawkeye Challenge all-tournament team… one kill and one dig shy of a triple-double against Michigan (54 assists, nine digs and nine kills)… had double digit digs seven times… recorded three or more total blocks eight times, including a career-high four block assists at Penn State (Oct. 5).

2006 as a Sophomore… Started all 32 matches and 115 games at setter… named to the all-tournament teams at the Hawkeye Challenge and the Bluejay Invitational… led the team with 27 service aces… registered 10.64 assists per game, good for ninth in the Big Ten… put up 9.93 assists per game during conference play… had a career-high 73 assists and a season-high 19 digs against Florida Atlantic (Sept. 9)… had double digits in digs 11 times during the season… put up 61 assists and had five kills against the College of Charleston (Sept. 16)… received the team[apos]s Academic Award after posting a 4.0 GPA.

2005 as a Freshman… Played in all 33 matches and 122 games at setter… named to the all-tournament teams at the Hawkeye Holiday Inn Classic and Coastal Carolina Classic… averaged 10.34 assists per game… recorded a triple-double with 11 kills, 53 assists and 10 digs in Iowa’s win over Northern Iowa (Sept. 27)… put up a season-best 62 assists in Iowa’s 3-1 win over Texas-Arlington (Sept. 9)… second on the team with 29 service aces… had six kills, 31 assists, nine digs and a .857 attack percentage against New Hampshire (Sept. 3)… had a season-high 23 digs, along with 54 assists and six kills against Indiana (Oct. 28).

High School… Helped lead her team to three straight Class A state championships, 2002-2004… Conference Co-Player of the Year in 2004… named to the All-Conference team in 2003 and 2004… three-year academic all-conference honoree… part of the Chicago Tribune and Champaign News-Gazette All-State First Teams in 2004… part of the 2004 Prep Volleyball ‘Senior Aces’ list, the 100 highest rated seniors in the country… played for Sports Performance for three years and Club Fusion in 2005… four-year member of the honor roll… National Honor Society.